You are here: Home1 / Lactobacillus

Cavernosal abscesses are rarely reported with the majority of reported cases having an identifiable underlying causative factor. We present the case of a 50-year-old male with poorly controlled diabetes mellitus and large abscesses of the bilateral cavernosal bodies. He was successfully treated with surgical debridement and healing of the wound by secondary intention.

Introduction
We present the case of a 50 year-old male with bilateral cavernosal abscesses. These infections are a rare entity and have previously been reported in association with intracavernosal injection therapy (1,2), cavernosography (3) priapism (4,5), foreign body (6) and trauma (7). A literature search revealed five previously reported cases of spontaneous cavernosal abscesses, which are defined as abscesses without a definite underlying etiology (8,9,12,13,16). We present a case of spontaneous, bilateral cavernosal abscess in a patient with uncontrolled diabetes mellitus and balanitis xerotica obliterans (BXO).

Case Report
A 50 year-old male with poorly controlled diabetes mellitus presented to our institution with a three week history of worsening perineal swelling, pain, dysuria and weakening of his urinary stream. He had been evaluated at an outside facility a week prior and was treated with doxycycline. His medical history was significant only for poorly controlled diabetes mellitus, currently managed with oral hypoglycemics. His glycosylated hemoglobin level was found to 12.6% (normal 4.4-6.4%). He had no history of prior genitourinary surgery, instrumentation, urinary tract infections, STD or cavernosal injection therapy. On physical examination there was firmness and fluctuance of the perineum posterior to the scrotum, surrounding the urethra. Examination of his glans penis demonstrated white macules, suspicious for balanitis xerotica obliterans, with no apparent involvement of the meatus. Laboratory examination revealed a white blood cell count of 10,100 per mm3, serum glucose of 378 mg/dL. Microscopic urinalysis revealed 2 to 5 red blood cells per high power field and 2 to 5 white blood cells per high power field. A CT scan of the pelvis with contrast revealed a peripherally enhancing fluid collection involving the bilateral cavernosal bodies (see Fig. 1). Flexible cystourethroscopy was attempted in the operating room revealing external compression of the bulbar urethra by the cavernosal bodies. Operative debridement was then carried out through a midline perineal incision. The cavernosal bodies were found to be quite enlarged and tense. (see Fig. 2). Aspiration revealed purulent drainage and both cavernosal bodies were opened and irrigated (see Fig. 3). There was also abscess found in the corpus spongiosum requiring debridement to the level of the bulbar urethra. A Foley catheter was then placed and the debrided bulbar urethra closed over the catheter with an absorbable suture. After all necrotic tissue was debrided, a suprapubic catheter was placed and the perineal wound was packed with saline soaked gauze. Post-operatively blood glucose levels were tightly controlled and the patient was discharged home performing twice-daily wet-to-dry dressing changes. The perineal wound was allowed to heal by secondary intention with weekly wound checks in an outpatient clinic. Wound cultures for aerobes, anaerobes and fungal organisms grew only Lactobacillus spp. Blood and urine culture yielded no growth. After six weeks, a retrograde urethrogram demonstrated no significant flow-limiting urethral lesions or fistulae. At three month follow-up, healing of all wounds was complete. The patient reported no erectile dysfunction prior to development of the described process, however, objective measures of pre-operative erectile function were not available. Post-operatively he reported a decrease in the quality of his erections but was able to achieve erection sufficient for penetration with oral phosphodiesterase inhibitors.

Discussion
Spontaneous cavernosal abscess has previously been described as an abscess without an identifiable underlying cause (8). In previous reports of spontaneous cavernosal abscesses, attempts have been made to identify an underlying cause with proposed etiologies including infection from overlying skin (8), external trauma (9), and hematogenous spread with subsequent seeding of the cavernosa (8). Pearle and Wendel reported on a patient in whom oral pathogens were isolated from culture of the cavernosa with concurrent periodontal abscesses. (10). In our patient, the overlying skin was clearly uninvolved in the infection and there was no evidence to suggest an occult traumatic event leading to secondary infection. The patient had no dental abscesses, however hematogenous spread from dental caries with seeding of the cavernosal bodies in the setting of uncontrolled diabetes mellitus, remains a potential cause. The isolation of Lactobacillus spp. from cavernosal cultures at least partially supports this theory. This organism is known to inhabit the mouth, gastrointestinal tract and female genital tract (11). It is infrequently associated with clinically significant infections and the significance of its presence in our cultures is unknown. The patient was previously treated with a course of antibiotics and this organism may be a contaminant in the cultures. However, in a review of 241 cases of Lactobacillus infections with 39 cases being localized infection, Cannon et. al., identified eight cases of abscesses in which Lactobacillus spp. was isolated as the causative organism. The most common underlying factor in the 39 localized infections was diabetes, which was present in seven of their patients (11).
Various open surgical approaches have been described for management of cavernosal abscesses in the distal cavernosal bodies including percutaneous aspiration for small, uncomplicated abscesses. Post-operative drainage has been obtained with open packing (10), Penrose drains (12,13), as well as closed suction drains (4). Regardless of the operative approach chosen, the importance of aggressive initial debridement and close follow-up to monitor wound healing is illustrated by the case report from Ehara, et. al. This case describes a 54-year-old patient that underwent open surgical drainage of a cavernosal abscess with a Penrose drain left post-operatively. Three weeks after his initial operation he developed a recurrent abscess with methicillin-resistant Staphylococcus aureus. The infection failed to respond to medical treatment and the patient eventually went on to require total penectomy three months after his original surgery (12).
To our knowledge our case is the first report of isolated cavernosal abscess involving the proximal cavernosal bodies. Due to the location and extent of the abscess on pre-operative imaging, we followed principles of surgical management similar to those set forth for the management of Fournier’s gangrene (14). Our goals in the management of this patient were to extensively debride all necrotic and infected tissue, and to minimize the functional impairment after wound healing. The perineal incision provided sufficient exposure of both cavernosal bodies as well as the bulbar urethra. This allowed for extensive debridement of the involved tissue as well as repair of the involved urethra. Due to the extent of debridement, attempting primary closure of the wound would most likely have been unsuccessful and would have put the patient at risk for recurrent abscesses or secondary infections.
Cavernosal abscesses are a rare entity with potential for serious morbidity. Open surgical drainage has proven to be an effective treatment for this disease. Pre-operative patient counseling is crucial with regard to post-operative function and appearance of the genitalia. Treatment should be individualized to each patient based on their medical comorbidities and the unique characteristics of their infection. 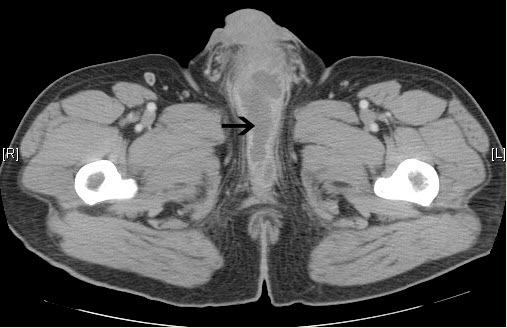 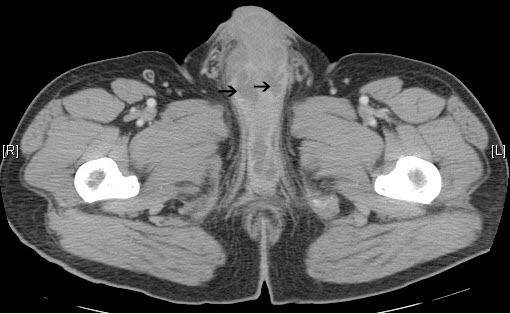 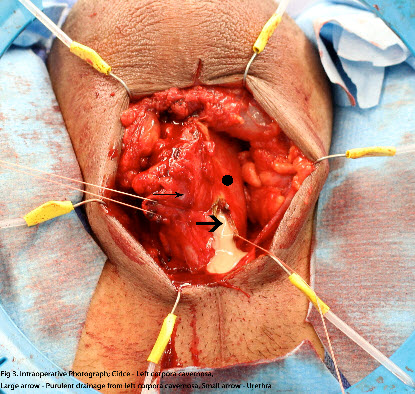