You are here: Home1 / lymphadenectomy 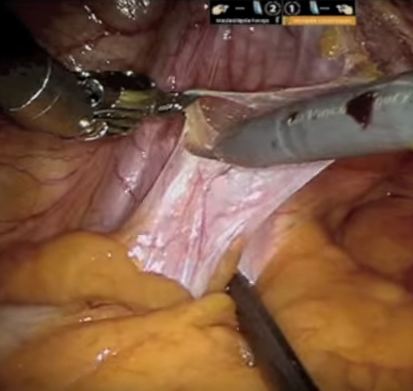 The sequence of ePLND is at the beginning of the operation to take advantage of greater visibility of the deeper hypogastric planes. The urachus is left intact for an exposure/retraction point. The anatomy is described in terms of lymph nodes (LNs) that are easily retrieved vs those that require additional manipulation of the anatomy, and a determined surgeon. A representative cohort of 167 RARPs was queried for representative metrics that distinguish the ePLND: 146 primary cases and 21 with neoadjuvant systemic therapy.

Whilst extended pelvic lymphadenectomy has become part of standard care in select patients undergoing radical prostatectomy at some centres, it is not universally accepted or performed and remains controversial, so why is this? The most common reasons cited for not performing a node dissection, or at least an extended node dissection, include lack of proven therapeutic benefit and the increased operative time and risk of complications. But do we really need to show a survival benefit to accept the role of extended pelvic lymphadenectomy for patients undergoing radical prostatectomy? It would take a randomised trial run over at least a decade, thousands of patients and untold cost to prove or disprove. Although randomised trials can be invaluable in assessing some aspects of medical or surgical care, they are not always appropriate or even desirable for surgical outcomes as O’Brien et al eloquently illustrated. What’s more, results from RCTs in surgery can be misleading – consider the Prostate Cancer Intervention Versus Observation Trial, in which overall survival at a median follow-up of 10 years was approximately 50% in both arms. This is equivalent to the overall survival in the observation arm of Messing’s trial, in which virtually no patients died of non-prostate cancer causes and contrasts starkly with the current life expectancy of 65 year old males in Australia of 20 years. Patients in PIVOT weren’t living long enough to die from prostate cancer!

There is no doubt that for accurate nodal staging, an extended lymphadenectomy is currently the gold standard, as reflected in the EAU guidelines on prostate cancer. Two very elegant trials in recent years assessed the performance of similar templates in terms of staging accuracy and concluded that a modified extended template struck the right balance between accuracy and risk of complications. Joniau et al, showed in a prospective cohort of 74 patients, around half of whom were lymph node positive, a modified extended template including the pre-sacral nodes had a staging accuracy of 97% and removed 88% of positive nodes. Omitting the pre-sacral nodes accurately staged 94% of patients and removed 76% of positive nodes. Mattei et al concluded that their modified ePLND removed approximately 75% of “sentinel” nodes in a prospective series of 34 node negative patients. Whether a “modified” ePLND or “plain” ePLND is performed, the staging accuracy is significantly better than a “standard” PLND, which omits the nodes around the internal iliac vessels and according to Joniau et al would accurately stage 76% of patients and remove only 29% of positive nodes. A “limited” node dissection, removing only the tissue within the obturator fossa performed even worse, staging 47% and removing just 15% of positive nodes. 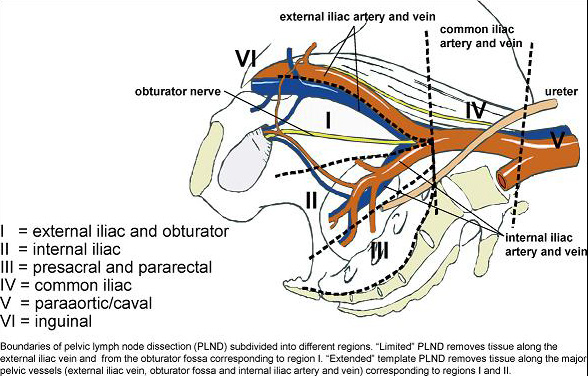 Beyond the staging benefit, Jindong et al recently published a prospective, randomised trial showing a BCR free survival benefit for patients undergoing extended versus standard pelvic lymphadenectomy. With a median follow-up of just over 6 years, intermediate risk patients undergoing ePLND had a 12% absolute reduction in biochemical recurrence (73.1% v 85.7%) and high risk patients more than 20% (51.1% v 71.4%) compared to those undergoing a standard node dissection. This may eventually translate into a survival benefit, or at least a clinical progression benefit, but in this cohort of patients, a reduction in biochemical recurrence means a reduction in the numbers requiring salvage radiation therapy and salvage androgen deprivation and the consequent side-effects and complications of these treatments.

It is clear the complication rate following ePLND is higher than with sPLND or no node dissection, but a recent review revealed the difference is accounted for by an increase in the incidence of symptomatic lymphoceles, most of which resolve with conservative management. Ureteric, nerve and major vascular injuries are rare. This would appear to be a much more acceptable complication profile than that following salvage radiotherapy, or androgen deprivation. Although uncommon, membranous urethral stricture following salvage radiation often confers debilitating and enduring morbidity. Continence and potency rates also suffer, not to mention bowel toxicity. A 20% absolute reduction in biochemical recurrence may also swing the pendulum away from adjuvant radiation in high risk disease, benefiting even more patients.

Proving a survival benefit with level 1 evidence is the holy grail of medical and surgical trials, but it is not the only outcome to consider. Biochemical recurrence following radical prostatectomy carries significant psychological burden and salvage therapies can carry significant morbidity. Disease recurrence is most common in the high risk population and there is now level 1 evidence of a real benefit to these patients when ePLND is included as part of their surgical care.

• Patients with T1-3N0 penile cancer were enrolled into a prospective phase I trial at a tertiary care institution from March 2010 to January 2012. All patients underwent an initial RAVEIL approach.

• Verification of adequacy of dissection was performed by an independent surgeon via a separate open incision at the conclusion of the RAVEIL procedure.

• Out of 10 patients, if more than two superficial inguinal fields with ≥2 nodes or more than four with ≥1 node remained within the superficial dissection field, the study would not proceed to phase II.

• Of 10 enrolled patients two had inguinal metastases and all positive nodes were detected by RAVEIL. The remaining eight patients had no metastases, with a mean of nine (range 5–21) left and nine (range 6–17) right nodes removed. One inguinal field RAVEIL was converted to an open dissection.

• The verifying surgeon confirmed that 18 of 19 inguinal fields (94.7% in nine patients) had an adequate dissection. Two benign nodes were found just beneath Scarpa’s fascia above the inguinal dissection field.

• Limitations of the study include an inability to determine decisively what specific wound complications were related to RAVEIL because of the protocol-specified creation of a small inguinal incision for verification of adequate dissection.

• RAVEIL allowed adequate staging of disease in the inguinal region among patients with penile cancer at risk for inguinal metastases.

In recent years, efforts to reduce morbidity from lymphadenectomy for penile cancer were based on surgical procedures to reduce the area of lymph node dissection. The proposition of extensive video-endoscopic inguinal lymphadenectomy, a technique still experimental, is to reduce the morbidity of conventional surgery without affecting the maximum chance of oncological control of locoregional disease. Therefore the initiative of using the help of a robot to facilitate the implementation of this procedure is very welcome.

The authors present an excellent study on their initial experience with robotic assisted video-endoscopic inguinal lymphadenectomy (RAVEIL). I understand that for better comparison of the dissection area with open surgery these authors have opted to use an additional incision in the inguinal fold. However this area is the least vascularized area of the field of dissection because the lymph nodes are resected above and below this additional incision. It would be better to make an incision at the upper limit of the dissection. This approach was used in open surgery with low complication rates. The rate of necrosis (10%) and wound breakdown (10%) seems high for a minimally invasive approach. Possibly, when no additional incision is used to complement the procedure these rates will become lower.