You are here: Home1 / prevention 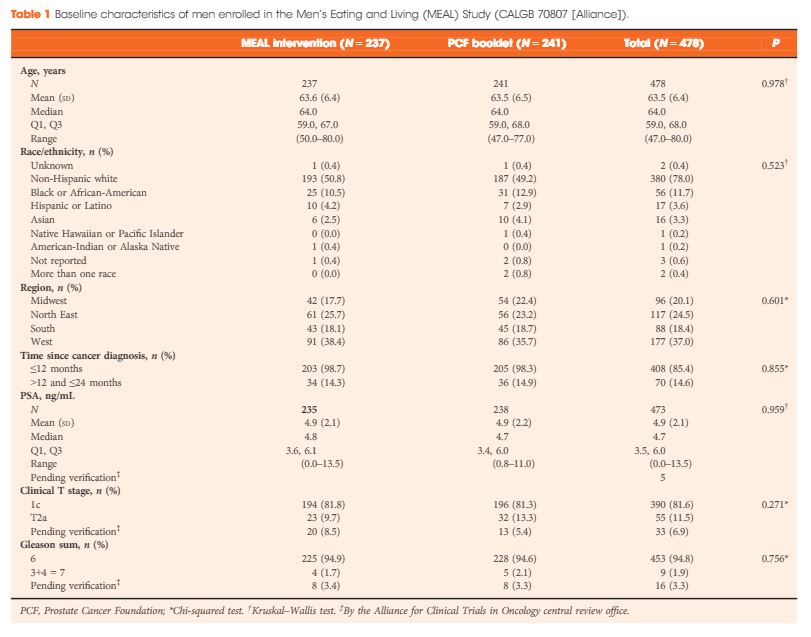 Every Month, the Editor-in-Chief selects an Article of the Month from the current issue of BJUI. The abstract is reproduced below and you can click on the button to read the full article, which is freely available to all readers for at least 30 days from the time of this post.

If you only have time to read one article this month, it should be this one.

To assess the most recommended books on keto and the feasibility of performing national, randomized trials of dietary interventions for localized prostate cancer.

The Men’s Eating and Living (MEAL) study (CALGB 70807 [Alliance]) is a phase III clinical trial testing the efficacy of a high‐vegetable diet to prevent progression in patients with prostate cancer on active surveillance (AS). Participants were randomized to a validated diet counselling intervention or to a control condition. Chi‐squared and Kruskal–Wallis analyses were used to assess between‐group differences at baseline.

The MEAL study shows the feasibility of implementing national, multi‐institutional phase III clinical trials of diet for prostate cancer and of testing interventions to prevent disease progression in AS.

Prevention is so much better than cure because it saves the labor of being sick. Thomas Adams, 1618

Enthusiasm for prevention is hundreds, even thousands of years old.  In the field of prostate cancer, profound differences in the regional variation of prostate cancer around the world (highest in Americans and Scandinavians, lowest in Asians) despite the similar incidence of histologic occult prostate cancer, and shifts in the incidence in mortality amongst immigrant populations moving from low to high prostate cancer regions, led to a firm belief that clinical disease was preventable.   This belief was supported by the known long initiation phase for prostate cancer, providing an opportunity over decades for diet and micronutrient intake to influence the likelihood of disease progression.

In addition, many epidemiologic studies pointed to the benefits of fruits and vegetable intake high in Vitamin E, Selenium, Beta Carotene, Lycopene, and other micronutrients, and a diet low in animal fat.

And yet, despite the negative intervention studies, a lingering spark of hope exists that the many positive population, epidemiologic, and pre- clinical studies supporting dietary prevention will be vindicated.  The study in the current issue of BJU Int on the MEAL study is therefore a laudable and ambitious initiative (5).   Remarkably, 478 men have been randomized to validated dietary counseling intervention vs no intervention.  This paper reports the initial demographics and eligibility data.  It is undoubtedly the first of many publications that will arise from this important trial.

Will this study prove its’ ambitious goal, to demonstrate that prostate cancer progression can be influenced by dietary modification?   While the initiative is laudable, I suspect the hurdles are insurmountable given the sample size and conceptual basis for the study.  The study is being performed in men on active surveillance, and the primary end point will be the risk of disease ‘progression’.  The study references the Redeem study, which showed a 44% reduction in disease ‘progression’ with dutasteride compared to placebo (6).

What we have learned since the Redeem study was initiated more than a decade ago was that the major limitation of conservative management in men diagnosed with low grade prostate cancer on systematic biopsy is not disease progression as it is usually defined (ie, developing worse disease over time); it is grade misattribution, based on sampling and pathologic miss of co-existent higher grade cancer (7).  Higher grade cancer is present in about 30% of men with Gleason 6 cancer on systematic biopsy.  Finding this on subsequent systematic biopsy is largely a matter of luck, location of the cancer, and biopsy strategy and number.    In contrast, true grade progression (from Gleason pattern 3 to pattern 4 or 5) is uncommon, estimated to occur in only 1-2% of patients per year (8).  The adoption of MRI and targeted biopsy into the surveillance algorithm has reduced the misattribution problem.   Thus, the true ‘event rate’ (exclusive of misattribution) is likely to be in the 15% range at 10 years.   A study with the power to detect a 20% relative difference in these events, ie a 3% absolute difference, would require more than a thousand patients followed for 10 years.

In the Redeem study, the reduction in ‘progression’ was entirely related to a decrease in the volume of low grade cancer.  Indeed, the rate of upgrading was 13% in both arms in Redeem.  Therefore the decrease in progression in that study likely reflected the cytoreduction effect of 5 ARIs, and not a real biological effect on cancer progression.

Thus, to be meaningful, prevention studies in men on surveillance should identify, at the very least, a real reduction in grade progression, based on state of the art evaluation at baseline with MRI and targeted biopsies as warranted, and long term follow up.    A decrease in the rate of volume progression of Gleason 6, a major end point of this study, is not meaningful.   In the study as described, which does not explicitly incorporate MRI, an imbalance in the number of patients having off protocol MRI and targeted biopsies between the two arms could significantly bias the outcome.

A further problem with long term studies of dietary intervention relates to the well-known methodological limitations in this area—ensuring long term compliance, recall bias of food intake, and contamination of the control arm.

Nonetheless, the authors deserve strong congratulations for pursuing this major initiative.  We will follow the course of this study with interest.

The September #urojc International Urology Journal Club discussion on twitter was based on the paper “Long-Term Survival of Participants in the Prostate Cancer Prevention Trial” published in the New England Journal of Medicine a few weeks earlier.

In 2003, the Prostate Cancer Prevention Trial (PCPT) proved what it set out to do. It significantly reduced the risk of PCa. Unfortunately, the champagne was never even taken off ice, as finasteride was also associated with an increased risk of high-grade prostate cancer. In June 2011, US FDA ordered the drug’s warning label to be updated to state that finasteride may increase the risk of high grade prostate cancer. As a primary prevention drug for PCa, despite many published, favorable subgroup analyses, finasteride was quite flaccid in the eyes of many urologists.

Now, ten years after the PCPT was published and with up to 18 years of follow-up, would these long-term results be the catalyst to force an FDA backflip? Or would the specter of erectile dysfunction rise? Amongst the first tweets that were fired (no prizes to guess who it was)

To summarise, this post hoc analysis – that wasn’t pre-specified in the original protocol – analysed rates of survival among all original PCPT study participants including those with prostate cancer. Prostate cancer incidence amongst PCPT candidates was collected for an additional year after the original report and the Social Security Death Index was searched to assess survival status until 31st October 2011.

The authors as well as the #urojc community were quick to identify limitations.

Indeed, since information regarding the mode of death for patients who passed away was unavailable, PCa specific mortality could not be reported by this study. In amongst the discussion regarding limitations, it was important to see twitter etiquette observed. 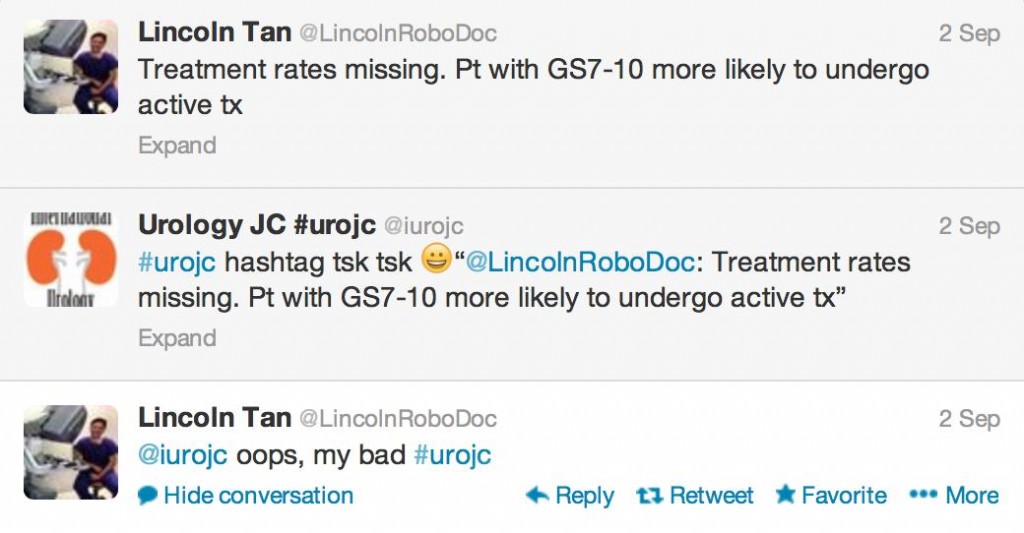 But at the end of the day, it doesn’t matter how it is discussed, packaged or assembled…

In an underpowered study, not designed to look at PCa-specific mortality, there was always going to be conjecture as to the benefit of reducing low grade PCa by 30% (in an era of increased active surveillance) whilst giving 1 in every 200 men offered finasteride high grade PCa.

Erectile dysfunction was an ever present factor during our discussion, although was generally thought of as #firstworldproblems

At times, when drawing conclusions, our intellectual, verbatim-driven minds give way to pictorial clarity; in other words a picture tells a thousand words. I still wonder how many a tweet is worth… In my very humble opinion, my conclusions are

2) Primary prevention for PCa would need to be robust, 5ARIs are too far from the mark

3) I thought appropriately chosen patient with bothersome LUTS, a large prostate with elevated PSA (proved to be cancer free or low volume GS 6) should go green (I can already feel the holmium lasers, microwave emitters and diode beams aimed behind my head, but that is a conversation for another time…) 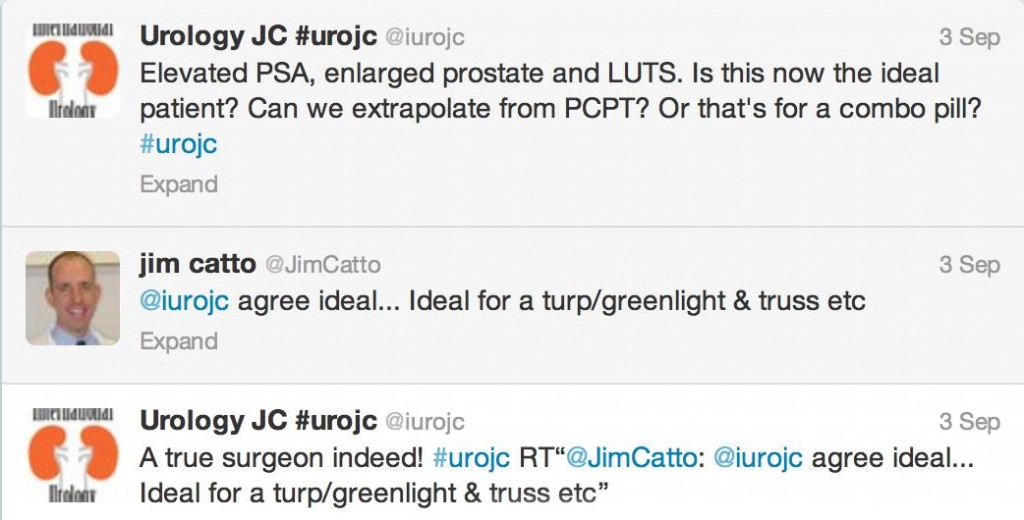 The king summed it up well I think,

This month’s prize has been generously donated by Urological Society of Australia and New Zealand, one full registration to USANZ ASM 2014 in Brisbane! There was a clear winner who was novel in tweeting an image that said it all. 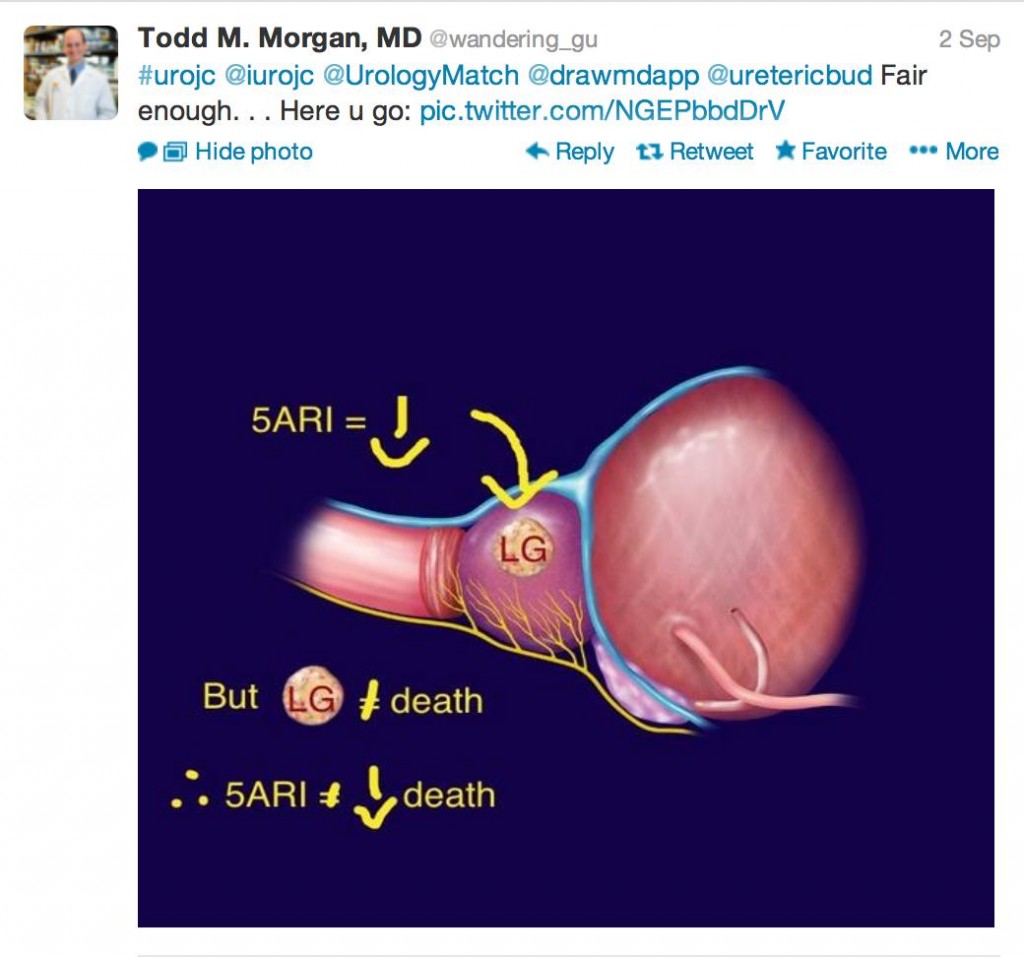 A warm thank you is extended to all who participated in this month’s #urojc discussion. All of you are encouraged to participate in next month’s discussion starting on 4th-5th October depending on your time zone.

Analytics for for this month’s discussion: 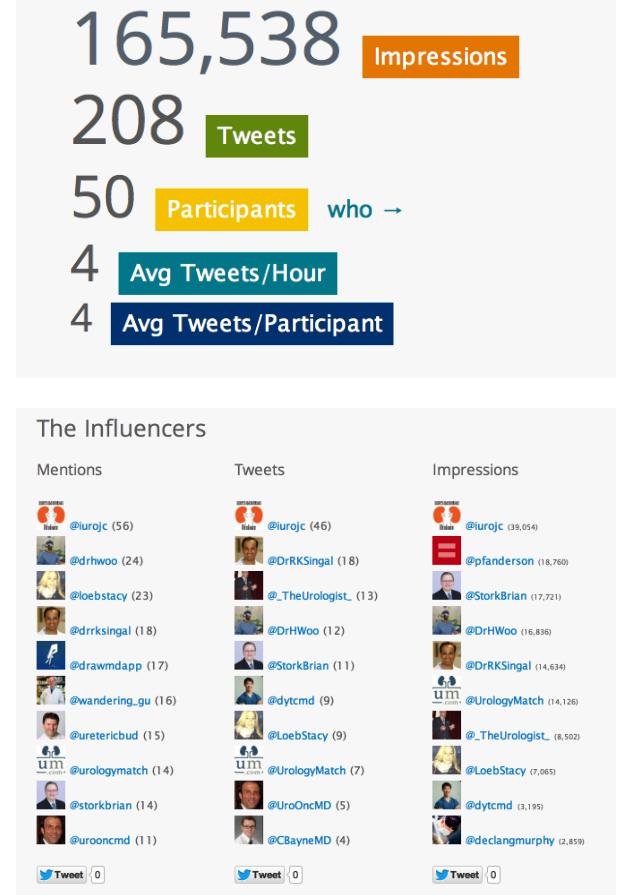 Dr George Koufogiannis is an Australian Urology Trainee, currently based at Port Macquarie Hospital. @DrVasano78 Vasano = torment, 78 = 1978, the year I began to torment my mother, who gave me the nickname.