You are here: Home1 / renocolic fistula

We report a case of a 71-year-old man who developed a renocolic fistula 10 months after radiofrequency ablation. At the time of fistula formation there was no evidence of tumor recurrence.

Introduction
Image-guided radiofrequency ablation (RFA) is an established minimally invasive treatment for renal cell carcinoma (RCC) in patients with significant comorbidities or limited renal function (1). Reported complication rates of image-guided RFA are lower than for extirpative surgery, ranging from 0% to 11% for RFA and 14% to 26% for surgical excision (2). Renocolic fistula is a rarely described complication. We present a case of delayed renocolic fistula following radiofrequency ablation of a small renal cell carcinoma and a review of the three previously reported cases.

Case Report
The patient is a 71-year-old white male who was found to have an anterior right lower pole, 2.1 centimeter exophytic renal mass after abdominal computed tomography (CT) for vague abdominal pain. The patient elected to undergo CT guided radiofrequency ablation. Intra-procedural and post-procedural imaging showed no evidence of injury to adjacent organs. At four month follow up the patient had no complaints, and there was no evidence of tumour recurrence on CT scanning. At an unscheduled ten month appointment he reported pneumaturia and had developed a urinary tract infection. CT demonstrated air within the collecting system. The ascending colon was now immediately adjacent to the area of ablation concerning for a raising concern that the patient may have a renocolic fistula. A barium enema demonstrated filling of the right renal pelvis confirming the fistula.

Right partial nephrectomy and right hemicolectomy was performed without intraoperative complication. The collecting system defect was closed with interrupted absorbable sutures and the renal defect was closed with absorbable sutures bolstered with pledgets and Surgiseal. Pathological evaluation of the specimen revealed no residual tumor. His post operative course was complicated by colonic anastomotic leak and intra-abdominal abscesses requiring the placement of percutaneous drains, open debridement, and eventual placement of an end ileostomy over a nine month period. His ileostomy has been reversed. He is doing well with no tumor recurrence 29 months post ablation.

Discussion
We have identified 2 cases of renocolic fistula directly attributable to treatment of a renal tumour, one percutaneous and one surgical assisted, and one further case which was confounded by extensive local tumor recurrence.
In a cohort of 24 patients, Weizer et al reported on one fistula occurring in a 56 year old male with a 1.8 cm left sided anterior upper pole lesion and a solitary kidney who underwent percutaneous RFA. The fistula manifested 7 days post ablation. The renal unit was successfully salvaged with nephrostomy tube decompression and total parenteral nutrition. (3)
Medina et al reported a case of renocolic fistula in a patient with a left solitary kidney who had undergone two previous partial nephrectomies intraoperative RFA (approach not reported). In this case the renocolic fistula manifested 7 days postoperatively as watery diarrhea. The patient was treated with double J stent placement, colonic resection and closure of the renal fistula tract. Four days after repair the patient developed a renoperitoneal fistula and ultimately had to undergo a radical nephrectomy. Pathology demonstrated Fuhrman grade 1/4 clear cell carcinoma. (4)
Uribe reported on a 78 year old man who underwent laparoscopic RFA of a 3 cm left sided lesion that was to be followed by laparoscopic partial nephrectomy (ablate and resect arm of a prospective study). The resection was abandoned due to an intraoperative cardiac arrhythmia and subsequent myocardial infarction. Eight months later the patient’s renal mass had increased in size to 18 cm with invasion through the wall of the colon and fistula formation. Eventual resection revealed a Fuhrman grade 4/4 clear cell carcinoma. In this case of aggressive local recurrence, it is difficult to directly attribute the fistula to the RFA procedure, although it may have played some role. (5)
Of the above two cases without tumor recurrence, renocolic fistula was diagnosed within 7 days of treatment. Our patient was completely asymptomatic until several months post ablation. Post RFA renocolic fistulas seem to manifest with typical signs and symptoms: urinary tract infections, pneumaturia, and watery diarrhea. Standard urological imaging techniques provide confirmation of the suspected diagnosis.
The location of the renal lesion is relevant in preventing bowel injury during RFA. Anterior tumors are more likely to be in contact with intra-abdominal contents and thus increase the risk of bowel injury (1,6). A 5 mm layer of fat has been described as sufficient to insulate the bowel from thermal injury (1,8). Multiple maneuvers have been described to decrease the chance of bowel injury, including patient positioning, levering the tumor with the RFA probe, and injection of sterile fluid to hydrodissect the tumor away from the bowel (1,6). Of the above cases without tumor recurrence, in all, the lesion was located anteriorly, increasing the risk of bowel injury and fistula formation. Some authors (8) have proposed a laparoscopic approach to anterior tumors to decrease the chance of bowel injury and while this may decrease the risk of injury, it is not entirely protective as evidenced by the above cases.

Conclusion
Renocolic fistula formation following radiofrequency ablation is an extremely rare complication. The manifestation of the fistula 10 months following treatment represents a delayed presentation of a previously described adverse event. Surgically assisted RFA may decrease the possibility of fistula formation for anterior tumors but is not entirely protective. Percutaneous RFA is an acceptable minimally invasive treatment option for small renal masses but is not without complications. 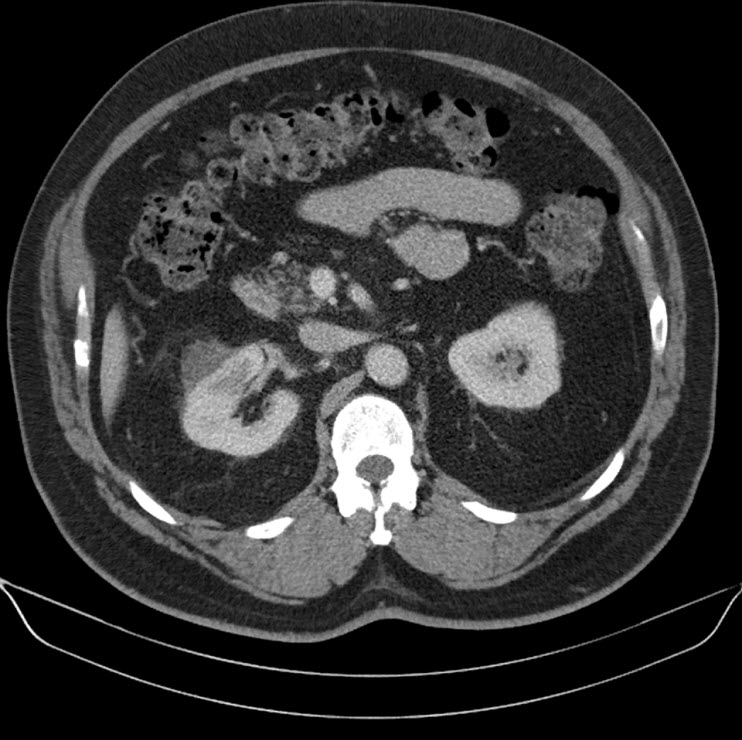 Axial CT status post radiofrequency ablation demonstrated no evidence of residual tumor with ample separation between the ablated mass and ascending colon. There is a small perinephric hematoma at the site of ablation. 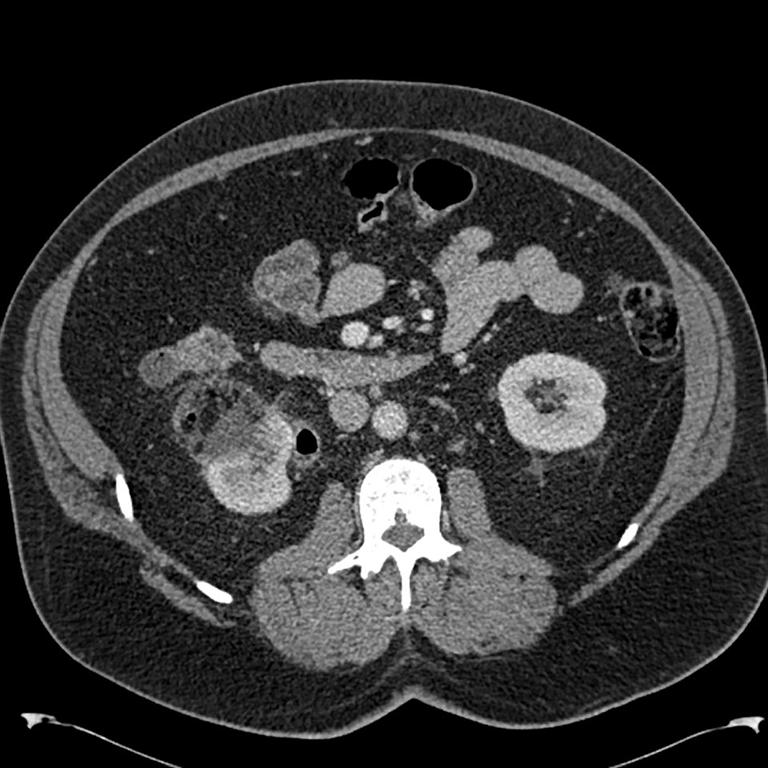 Axial CT at 10 months post ablation displaying the area of ablation closely contiguous to the ascending colon, as well as air within the collecting system of the right kidney suggesting a fistula. 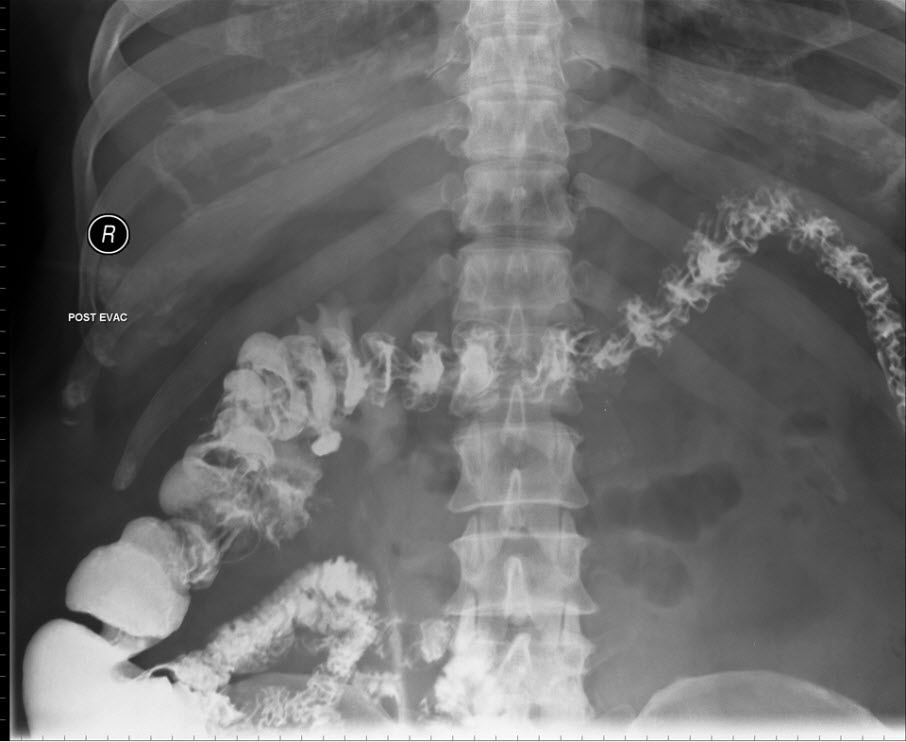 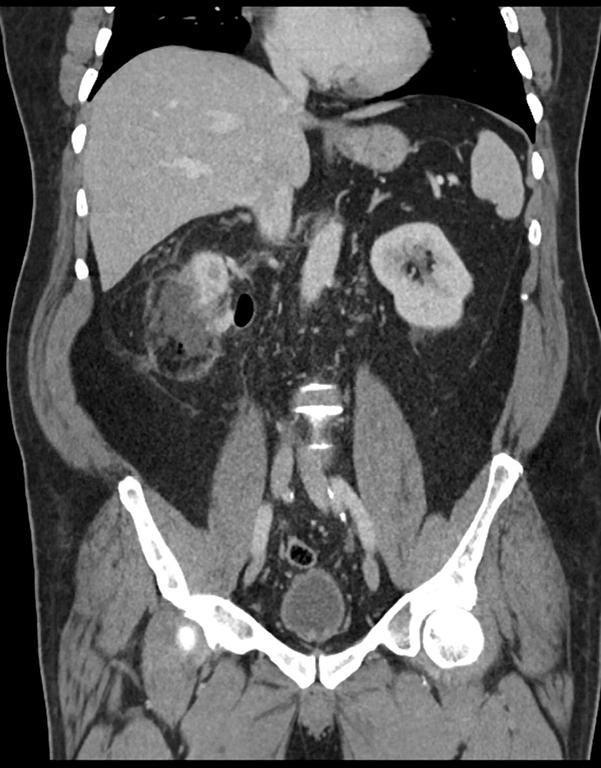