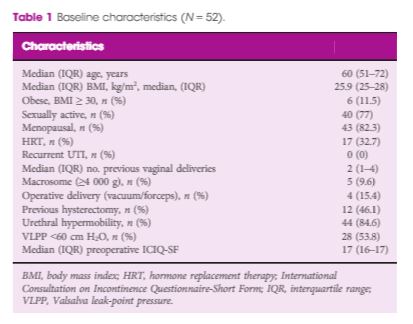 To assess the efficacy and safety of retropubic tension‐free vaginal tape (TVT) 17 years after implantation for the treatment of female pure stress urinary incontinence (SUI).

A total of 52 women underwent TVT implantation. At 17‐year follow‐up, 46 women (88.4%) were available for the evaluation. We did not find any significant change in surgical outcomes during this time. At 17 years after surgery, 41 of 46 women (89.1%) declared themselves cured (P = 0.98). Similarly, at 17‐year evaluation, 42 of 46 women (91.4%) were objectively cured. No significant deterioration in objective cure rates was observed over time (P for trend 0.50). The univariate analysis did not find any risk factor statistically associated with the recurrence of SUI. Of the 46 women, 15 (32.6%) reported the onset of de novo overactive bladder at 17‐year follow‐up. No other late complications were reported.

The 17‐year results of this study showed that TVT is a highly effective and safe option for the treatment of SUI.

Comments are now closed for this article

Traditional retropubic tension‐free vaginal tape (TVT) has been in widespread use for over 20 years. It has been estimated that 10 million women worldwide have received mid‐urethral tapes, and that at least half of these have been traditional retropubic TVTs. So, why have TVTs suddenly fallen into disrepute? Surely, so many women and their healthcare advisors can’t all be wrong? With this in mind, Braga et al. [1] are to be congratulated on their study in this issue of BJUI, in which they evaluate the efficacy and adverse effects of TVT for treatment of pure urodynamic stress urinary incontinence (SUI), with a 17‐year follow‐up.

Women’s reproductive health has been very well established compared to decades ago. Nowadays, women have options and opportunity to take care of themselves. After pregnancy, some women opt to tighten to vaginal walls. You can read more on that topic on vtightensafely.com. Reasons may vary for doing so, but the point is we’ve come a long way.

Whilst there have been other publications detailing relatively long‐term follow‐up of this procedure, as referenced in Braga et al. in their paper, the only study reported to date with a 17‐year follow‐up is that by Nillson et al. [2], who are from the three centres in Scandinavia where the mid‐urethral retropubic tape procedures were originally developed and undertaken. In the present study from Italy and Switzerland, however, Braga et al. have managed to follow up 46 out of 52 (88.4%) women who had a traditional TVT inserted between 1998 and 2000 [1]. The remaining patients were lost to follow‐up or had died in the intervening period. The patients were assessed using both subjective and objective outcome measures. At 17 years, 41 out of 46 patients (89.1%) were cured subjectively and 42 out of 46 (91.3%) were cured objectively on a stress test. The only long‐term adverse outcome was de novo overactive bladder (OAB) symptoms, which were reported by 15 out of 46 (32.6%) women at 17‐year follow‐up. This is not surprising, as it is well known that the prevalence of OAB increases with age [3], and obviously these women were significantly older when assessed at 17‐year follow‐up than when their TVTs were inserted. Unfortunately, despite the use of quality‐of‐life outcome measures (Patient Global Impression of Improvement and patient satisfaction scores), the authors have not reported the overall change in quality of life. This could be important when considering cure of SUI at the possible expense of developing OAB symptoms in later life. Most importantly, there were no reported TVT‐associated complications requiring release or resection of the TVT, nor were there any erosions into the vagina, bladder or urethra.

Although the use of all mid‐urethral tapes for urinary incontinence and meshes for pelvic organ prolapse was suspended by the Scottish Health Minister in 2014, because of concerns regarding a perceived high complication rate, brought about by a group of vocal campaigners and fuelled by the press, the final report published in 2017 recommended that women choosing surgery for SUI should be offered all available options including mesh and non‐mesh procedures [4]. Similarly, the final NHS England mesh report in 2017 [5] supported the use of retropubic mid‐urethral tapes rather than the trans‐obturator route, and the European (SCENIHR) Report [6] concluded that mesh for SUI is safe and should continue to be offered as a choice for women seeking surgery for their SUI.

Obviously, a wide range of options is available for the management of SUI, and conservative measures including pelvic floor muscle training should be offered first. For those women who do not desire a surgical solution, duloxetine is available and can be very effective when adequately tolerated. For those women who wish to undergo surgery, however, the main choices are a bulking agent, mid‐urethral tape, colposuspension or an autologous fascial sling. From all the reports and published literature to date the TVT would appear to be as, if not more, effective than all other procedures without having a higher complication rate. The data in the present paper by Braga et al. [1] should reassure healthcare providers that TVT continues to be a safe and effective surgical strategy for the management of SUI in women.

Comments are now closed for this article