To assess the efficacy of transcutaneous interferential electrical stimulation (IFES) and urotherapy in the management of non-neuropathic underactive bladder (UAB) in children with voiding dysfunction.

In all, 36 children with UAB without neuropathic disease [15 boys, 21 girls; mean (sd) age 8.9 (2.6) years] were enrolled and then randomly allocated to two equal treatment groups comprising IFES and control groups. The control group underwent only standard urotherapy comprising diet, hydration, scheduled voiding, toilet training, and pelvic floor and abdominal muscles relaxation. Children in the IFES group likewise underwent standard urotherapy and also received IFES. Children in both groups underwent a 15-session treatment programme twice a week. A complete voiding and bowel habit diary was completed by parents before, after treatment, and 1 year later. Bladder ultrasound and uroflowmetry/electromyography were performed before, at the end of treatment course, and at the 1-year follow-up. 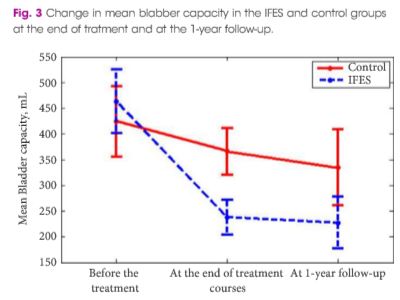 Combining IFES and urotherapy is a safe and effective therapy in the management of children with UAB.