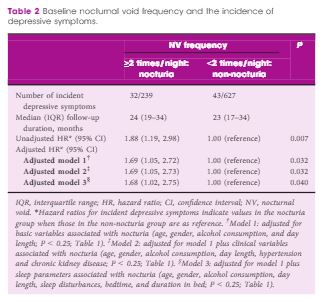 Nocturia increases the incidence of depressive symptoms: a longitudinal study of the HEIJO-KYO cohort

To evaluate the association between nocturia and the incidence of depressive symptoms.

Of 1 127 participants in the HEIJO-KYO population-based cohort, 866 elderly individuals (mean age 71.5 years) without depressive symptoms at baseline were followed for a median period of 23 months. Nocturnal voiding frequency was logged using a standardized urination diary and nocturia was defined as a frequency of ≥2 voids per night. Depressive symptoms were assessed using the Geriatric Depression Scale.

Nocturia is significantly associated with a higher incidence of depressive symptoms in the general elderly population, and gender differences may underlie this association.