To investigate tyrosine kinase inhibitors (TKI) and gold nanorods (AuNRs) paired with photothermal ablation in a human metastatic clear cell renal cell carcinoma (RCC) mouse model. Nanoparticles have been successful as a platform for targeted drug delivery in the treatment of urological cancers. Likewise, the use of nanoparticles in photothermal tumour ablation, although early in its development, has provided promising results. Our previous in vitro studies of nanoparticles loaded with both TKI and AuNRs and activated with photothermal ablation have shown significant synergistic cell kill greater than each individual arm alone. This study is a translation of our initial findings to an in vivo model.

Immunologically naïve nude mice (athymic nude-Foxn1nu) were injected subcutaneously bilaterally in both flanks (n = 36) with 2.5 × 106 cells of a human metastatic renal cell carcinoma cell line (RCC 786-O). Subcutaneous xenograft tumours developed into 1-cm palpable nodules. AuNRs encapsulated in human serum albumin protein (HSA) nanoparticles were synthesised with or without a TKI and injected directly into the tumour nodule. Irradiation was administered with an 808-nm light-emitting diode laser for 6 min. Mice were humanely killed 14 days after irradiation; tumours were excised, formalin fixed, paraffin embedded, and evaluated for size and the percentage of necrosis by a genitourinary pathologist. The untreated contralateral flank tumours were used as controls. 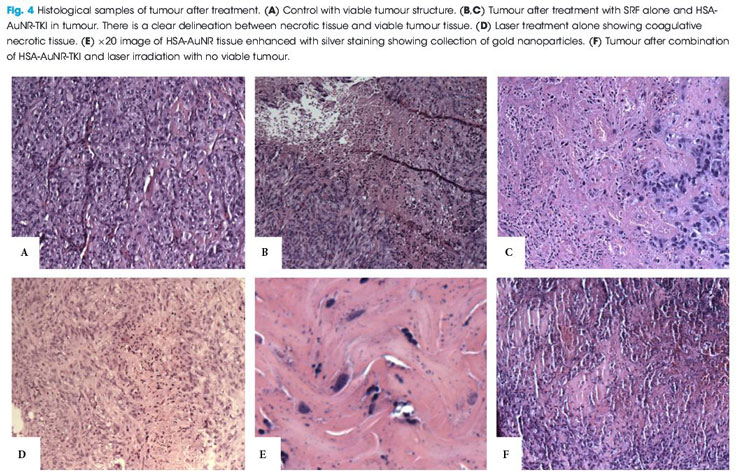 In the absence of laser irradiation, TKI treatment alone or when delivered via nanoparticles produced moderate necrosis. Irradiation with and without gold particles alone also improves tumour necrosis. However, when irradiation is paired with gold particles and drug-loaded nanoparticles, the combined therapy showed the most significant and synergistic complete tumour necrosis of 100% (P < 0.05). This study illustrates the potential of combination nanotechnology as a new approach in the treatment of urological cancers.