To use the number of positive growth periods as a characterization of the growth of small renal masses in order to determine potential predictors of malignancy.

Patients who underwent axial imaging at multiple time points prior to surgical resection for a small renal mass were queried. Patients were categorized based on their pathological tumour grade and stage: favourable (benign, chromophobe and low‐grade pT1–2 renal cell carcinoma [RCC]) vs unfavourable (high‐grade of any stage and low‐grade pT3–4 RCC). A positive growth period was counted each time the difference in greatest tumour diameters between two images was positive. The Cochran–Armitage trend test and Somers’ D association were used to determine if the number of positive growth periods was correlated with unfavourable pathology. 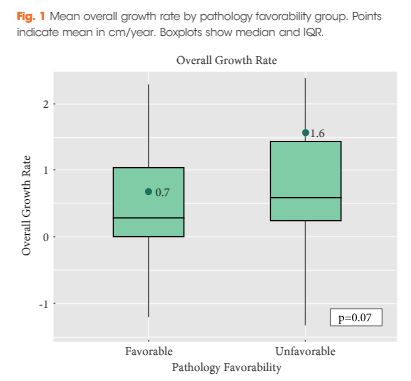