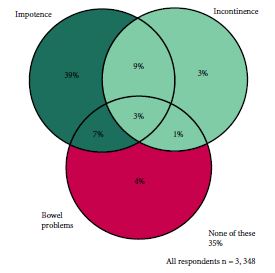 Every Month the Editor-in-Chief selects the Article of the Month from the current issue of BJUI. The abstract is reproduced below and you can click on the button to read the full article, which is freely available to all readers for at least 30 days from the time of this post.

Finally, the third post under the Article of the Month heading on the homepage will consist of additional material or media. This week we feature a video from Dr. Anna Gavin discussing his paper.

To investigate the prevalence of physical symptoms that were ‘ever’ and ‘currently’ experienced by survivors of prostate cancer at a population level, to assess burden and thus inform policy to support survivors.

Symptoms after prostate cancer treatment are common, often multiple, persist long-term and vary by treatment method. They represent a significant health burden. An estimated 1.6% of men aged >45 years are survivors of prostate cancer and currently experiencing an adverse physical symptom. Recognition and treatment of physical symptoms should be prioritised in patient follow-up. This information should facilitate men and clinicians when deciding about treatment as differences in survival between radical treatments is minimal.