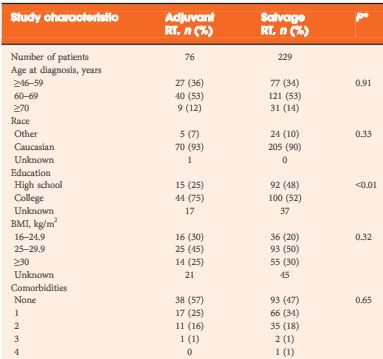 Finally, the third post under the Article of the Week heading on the homepage will consist of additional material or media. This week we feature a video from Dr. Peter Carroll, discussing his paper.

Postoperative radiation therapy for patients at high-risk of recurrence after radical prostatectomy: does timing matter?

To evaluate among radical prostatectomy (RP) patients at high-risk of recurrence whether the timing of postoperative radiation therapy (RT) (adjuvant, early salvage with detectable post-RP prostate-specific antigen [PSA], or ‘late’ salvage with a PSA level of >1.0 ng/mL) is significantly associated with overall survival (OS), prostate-cancer specific survival or metastasis-free survival, in a longitudinal cohort.

After a median of 74 months after RP, 65 men had died (with 37 events of PCSMM). Adjuvant and salvage RT patients had comparable high-risk features. Compared with adjuvant, salvage RT (early or late) had an increased association with all-cause mortality (hazard ratio [HR] 2.7, P = 0.018) and with PCSMM (HR 4.0, P = 0.015). PCSMM-free survival differed by further stratification of timing, with 10-year estimates of 88%, 84%, and 71% for adjuvant, early salvage, and late salvage RT, respectively (P = 0.026). For PCSMM-free survival and OS, compared with adjuvant RT, late salvage RT had statistically significantly increased risk; however, early salvage RT did not.

This analysis suggests that patients who underwent early salvage RT with PSA levels of <1.0 ng/mL may have comparable metastasis-free survival and OS compared with adjuvant RT; however, late salvage RT with a PSA level of >1.0 ng/mL is associated with worse clinical outcomes.