0
#BJUI, about the cover, Machu Picchu, Peru
by Admin 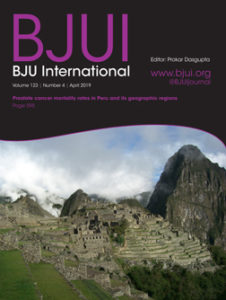 April’s Article of the Month (Prostate cancer mortality rates in Peru and its geographical regions) has been written by a multi-disciplinary, international team from Peru, Brazil, Mexico and the USA.

The cover picture shows Peru’s most famous landmark, the Inca city of Machu Picchu in the Andes mountains. It was built in the 15th century but abandoned after about 80 years, and, although it was known locally, it was not known to the outside world until 1911. Now it receives almost 1.5 million visitors each year, putting strain on the site but providing important tourist revenue.