After briefly venturing to tropical Cairns in 2015, the Asia-Pacific Prostate Cancer Conference returned to its traditional home in Melbourne for its 17th edition in 2016 (#APCC16). The meeting has previously featured the who’s who of prostate cancer and this year was no different with an all-star multidisciplinary faculty consisting of 18 international members in addition to our local experts. The meeting was well attended by over the 750 delegates from all parts of the globe and remains one of the largest prostate cancer educational events worldwide. 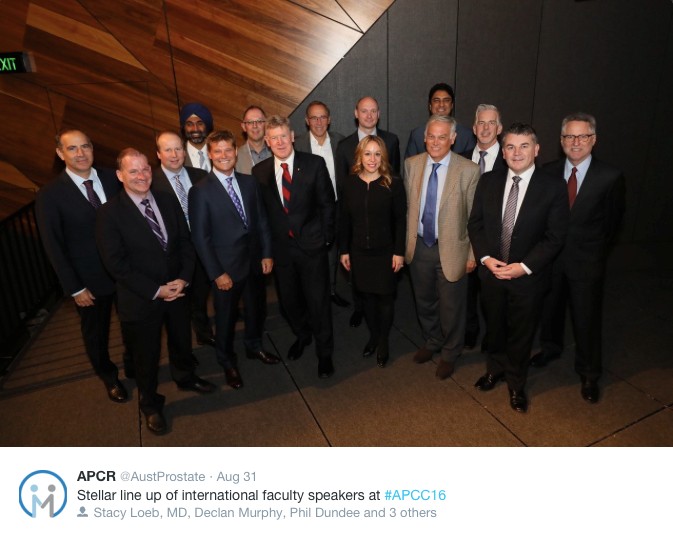 Conference president Professor Tony Costello opened the conference with the famous Whitmore aphorisms and outlined the impressive progress and discoveries we have made in the field over the last century. The first case of prostate cancer was described in 1853 in the London Hospital and was noted by the surgeon to be a “very rare disease” whereas now it is known to be the most commonly diagnosed malignancy amongst men. Pleasingly, research and emphasis on men’s health has grown with the disease highlighted by the newly completed, world-class Parkville Biomedical precinct in Melbourne, which includes “The Royal Men’s Hospital” (@APCR). Melbourne’s Lord Mayor (@LordMayorMelb) also dropped-by to reiterate his support for the meeting and the advancements made in men’s health.

In what is becoming an annual tradition, honourary Melbournian and Australian, Dr Stacy Loeb (@LoebStacy) once again got the sessions off to a flying start by delivering the ‘prostate cancer year in review’ which was an excellent overview of the abstracts produced over the last 12 months. The male attendees in particular were excited by the recent paper suggesting that more than 21 ejaculations per month acted as a protective factor for the development of prostate cancer. Although confounding factors may have played a role in the association seen, these were easily over-looked and its results were accepted as gospel and promoted as a public health message. The abstract featured the following day on the home page of The Australian Financial Review (https://www.afr.com/lifestyle/health/mens-health/tell-your-partner-frequency-counts-even-against-cancer-20160831-gr5fs4) – who knew that the answer to the world economic problems was so simple! 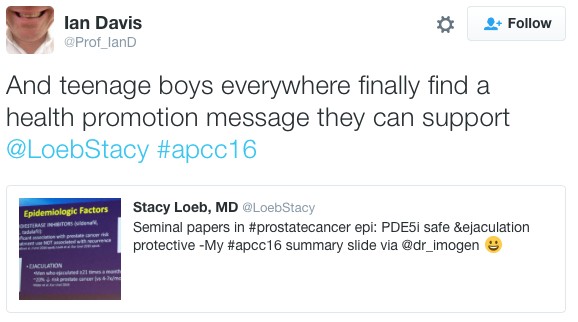 The meeting did however become more scientific as we heard from a range of international and local experts on the challenges of trying to find the balance of precision oncology in a time of tumour heterogeneity. It was clear that the future has arrived with recent advances in the field of genomics and biomarkers. These discoveries appear to be only the tip of the iceberg and further research holds the key in understanding tumour behavior in order to tailor treatment on a patient-to-patient level. Having witnessed a variety of experts from all parts of the globe present their finding there is little doubt that a major breakthrough is just around the corner. A special mention to Dr Niall Corcoran whose research was of such high quality that A/Prof Henry Woo (@DrHWoo) raised the white flag early in the Melbourne vs. Sydney inter-city rivalry.

The named lectures of #APCC16 were highlights of the conference. Keeping with the theme of the first morning, Dr Martin Gleave delivered the 4th Patrick C Walsh lecture titled ‘Two Tales of Precision Oncology.” Prof Peter Wiklund gave the inaugural ERUS lecture on the role of surgery for high risk and metastatic prostate cancer.

It wouldn’t have been a prostate cancer conference without the age-old debate of surgery vs. radiotherapy being revisited. Over three days Dr Robert Nam presented a series of talks on Canadian long-term outcomes and meta-analysis showing favourable results for team surgery. He also predicted that the highly anticipated ProtecT randomised trial due in the NEJM would show no difference ensuring the debate prolongs into the future and vowed to “eat my shorts” if the trial demonstrated a result favouring either modality. Dr John Violet flew the flag strongly for radiation oncologists in presenting the promising outcomes for 177Lu-PSMA in the mCRPC setting. Similarly, Dr Andrew Kneebone presented a compelling case for stereotactic radiation for oligometastatic disease. 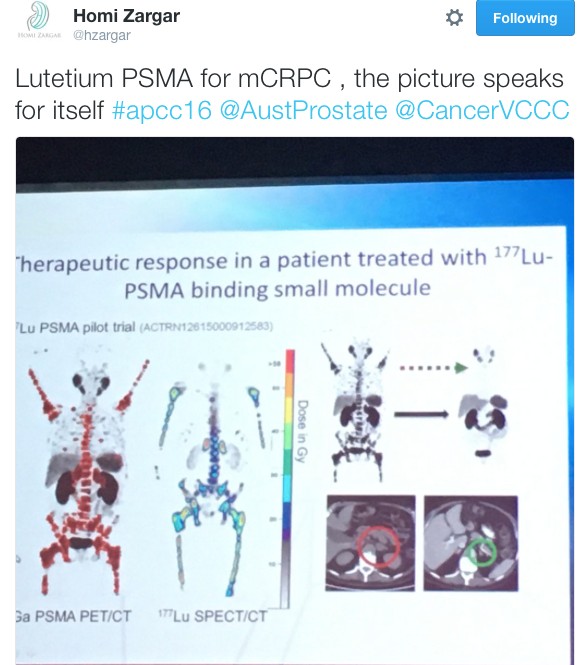 Imaging of the prostate was a hot topic throughout the conference. The excitement around PSMA-PET was at a climax following The Victorian Comprehensive Cancer Centre’s (@VCCC) experience that was presented by Associate Professors Michael Hofman (@DrMHofman) and Nathan Lawrentschuk (@lawrentschuk). The proceeding panel discussion focused on how to best utilise the technology and the role it currently plays in the prostate cancer landscape.  Despite not being FDA approved, its role in evaluating recurrence appears to be entrenched with data to support its superiority over other modalities but it was also proposed that it might have a place in initial staging of high-risk cancer.  The advancement of PSMA over conventional imaging also raised the question of how we now interpret previous trials such as CHAARTED and STAMPEDE whose results are based on superseded technology.

The hype surrounding PSMA-PET only just eclipsed that of mpMRI in the imaging landscape. Professor Philip Stricker presented a nomogram, which integrated MRI in determining who to biopsy and Dr Rob Reiter reported a terrific novel study of using 3D modeling to compare MRI results to final histopathology to determine correlation but did caution us with performing targeted biopsies alone which risks missing clinically significant cancers. Dr Nam also chimed in with a pilot study of using MRI as a screening test.

Suspense was built until Friday for the highly anticipated session on open vs. robotic surgery featuring the first presentation of the Brisbane RCT. The results of the trial have been already widely debated in the urological community and a discussion similar to the recent BJUI blog (https://www.bjuinternational.com/bjui-blog/its-not-about-the-machine-stupid/) ensued. Regardless of individual opinions on the trial, there is no dispute about the volume of work required to conduct a surgical randomised trial and there was wide praise for the efforts of the Brisbane team. Prof Peter Wiklund and Dr Homi Zargar (@hzargar) also reported the Swedish and Victorian experience respectively. The overall consensus was that robotic surgery offers the benefit of minimally invasive surgery but it is the surgeon rather than the modality, which has the most significant impact on outcomes.

There was a strong multi-disciplinary theme throughout the conference. The Nursing & Allied Health and Translational Science streams both had strong contingents attending. The quality of research presented and engagement amongst attendee was of the highest standard. This was exemplified by the session ‘MDT 2020’, which was a case-centred discussion by a panel of experts from a variety of professions and highlighted the value of a multidisciplinary approach in patient care.

The social program of #APCC16 was not overshadowed by its academic counterpart. The conference dinner was held at The Glasshouse where the food was exquisite and entertainment was provided by three waiters come tenors. Their classical renditions were received by guests with napkin twirling and swinging wine glasses. The frivolities were thoroughly enjoyed by all. 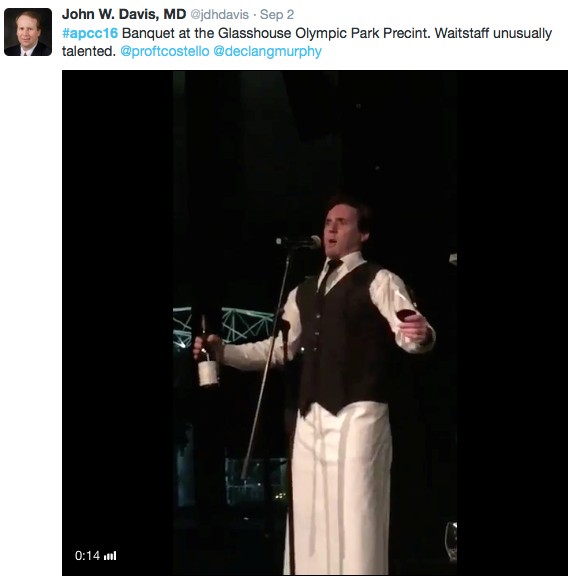 The final day of the conference was highlighted by the masterclasses. The 6th da Vinci© Prostatectomy Masterclass was convened by Drs Daniel Moon (@DrDanielMoon) and Geoff Coughlin and featured international faculty involvement by Dr John Davis (@jhdavis) and Professors Thalman and Wiklund. Considering the hype surrounding MRI it was no surprise that the 3rd Prostate MRI Imaging and Biopsy masterclass reached capacity many months ago. It should also be mentioned that the sponsored satellite meetings and breakfast sessions in the previous days which starred Dr Stacy Loeb, Dr Tia Higano (@thigano), Dr Jaspreet Sandhu, Prof Bertrand Tombal (@BertrandTOMBAL) and Genevieve Muir-Smith drew large numbers of attendees.

We would like to congratulate all attendees and their teams on the abstracts presented throughout the conference. The BJUI once again proudly supported the meeting with all accepted abstracts published in a special supplements issue and BJUI Associate Editors Declan Murphy (@declanmurphy), John Davis, and Nathan Lawrentschuk being prominent figures throughout the conference. A special mention to the poster prize winners from this year: 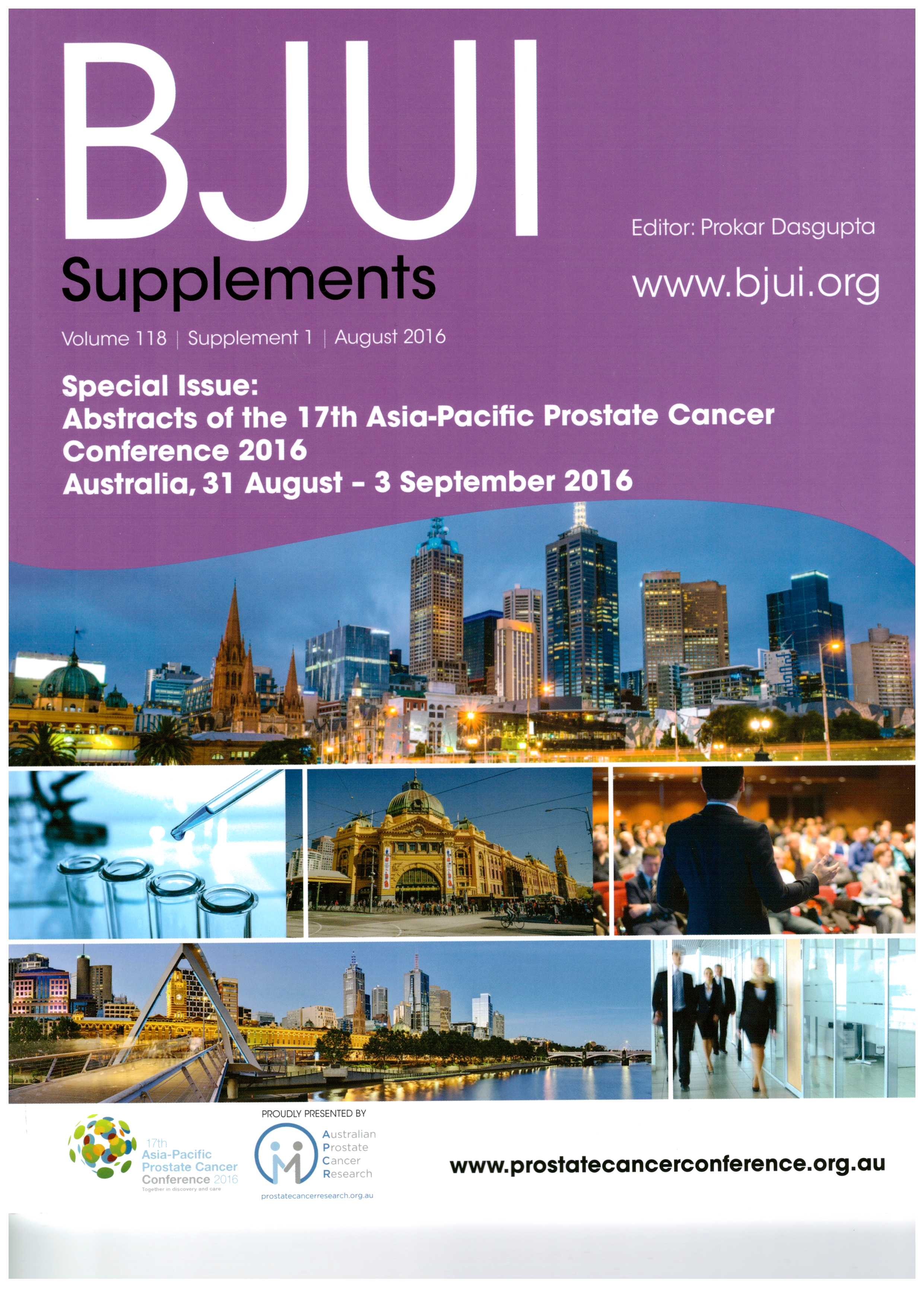 On behalf of all the delegates, we thank the entire international and local faculty who shared their knowledge over the conference and devote their time to improving men’s health. Furthermore, meetings such as this would not occur without the unheralded behind the scenes work. We extend our thanks to president Prof Costello, the convenors of the streams (A/Prof Declan Murphy, Dr Niall Corcoran, A/Prof Chris Hovens, Ms Helen Crowe (@helenrcrowe) & Mr Dave Gray (@DavidGrayAust)) and the APCC committee. We also graciously thank our sponsors without whom none of this would be possible and are vital to further advancements in men’s health.

Last but not least, given the rich history of social media seen at this conference, it would be remiss not to acknowledge another #SoMe landmark. Melbourne has previously been responsible in welcoming urology SoMe royalty, Dr Stacy Loeb, to the twitter world and this year the twitterati were introduced to Dr Peter Carroll (@pcarroll_). He managed to send out 4 tweets and eclipse 100 followers before the end of the conference. 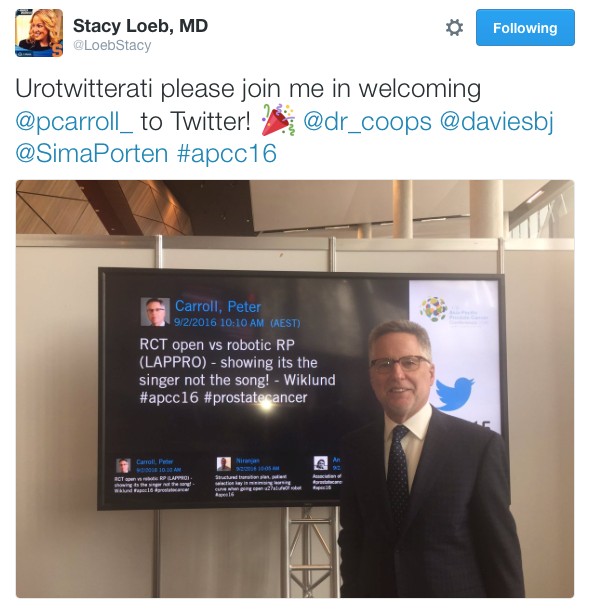 Article of the Month: Guideline of Guidelines – Thromboprophylaxis for...