The 69th Annual Scientific Meeting (ASM) of the Urological Society of Australia and New Zealand (USANZ) took place at a venue, well-known for its sun and surf – Gold Coast, Queensland. With some of Australia’s best beaches and coast line, the theme of the meeting was fitting: “Bringing out the Best”. Prem Rashid (@premrashid) and Peter Chin (@docpete888) convened a meeting boasting an impressive international and local faculty. Attendees were provided with a healthy balance of scientific update and social interaction to truly ‘bring out the best’ in each of us.

The meeting got off to a flying start with Dr. Mukesh Haikerwal AO (@DrMukeshH) delivering the Harry Harris Oration. His words were a timely reminder that the healthcare team has only one purpose: to care for the patient in need. The inspiring narrative of his time as a patient following a violent assault was told with humour and humility. The vastly underestimated issue of mental health was also brought to the fore. Despite a few technical malfunctions (Apple and Android!), the tone of the meeting was well and truly set. Attendees were then led out of the auditorium by a vibrant, rhythmic ensemble – a USANZ ASM first! Delegates at the welcome reception were joined by the SandMan, who created an artistic sand sculpture of the conference surfboard logo whilst delegates greeted one another over drinks and canapés. 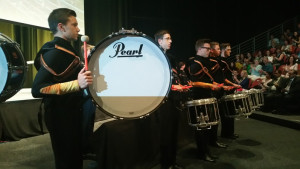 A drumming ensemble lead delegates to the Welcome Reception

The plenary sessions were varied and engaging. Mornings were filled with world-class presentations by local and international faculty. Michael Cookson (@uromc) discussed management of advanced prostate cancer, Margit Fisch discussed urinary diversion options, and Armando Lorenzo discussed issues in transitional care, an area very dear to his heart. James N’Dow (@NDowJames) was especially engaging. He spoke on the importance of the EAU Guidelines and the recent ratification of the same by USANZ. The cross-continental collaborative spirit was further demonstrated by an announcement from Christopher Chapple that USANZ had been accepted as a member of the EAU. On a softer note, James N’Dow captured listeners’ hearts with tales of his philanthropic work in Sub-Saharan Africa and Scotland. His starkly honest account challenged all present to consider engaging in charitable works for those in need both local and abroad. 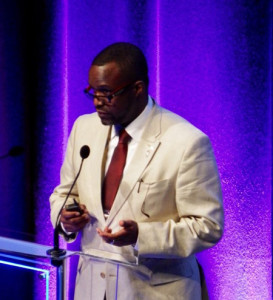 James N’Dow was particularly engaging, telling of his philanthropic work

Australia’s own Jeremy Grummet (@JGrummet) presented latest data on transperineal biopsy for the detection of prostate cancer. It was hard to argue with such impressive statistics: zero incidence of sepsis after more than 1000 biopsies and counting. He also reported early experiences with the Biobot Mona Lisa – a robotic technology for obtaining transperineal biopsies. Jeremy is to be congratulated for being recently appointed as an associate to the EAU Guidelines Committee.

Live debates provided robust discussion regarding hot topics. Kathleen Kobashi (@KKseattle) (described by the conference convenor as “the definition of intellectual elegance”!) and Kurt McCammon (@mccammonka) provided very topical debate regarding the merits and outcomes of native tissue versus synthetic slings. Focal therapy for prostate cancer was debated between our local expert Phil Stricker and international guest Jonathan Epstein, both of whom had very compelling arguments.

All this was conducted by the plenary session chairs, who looked particularly dapper behind the surf board faculty table! Only in Australia. 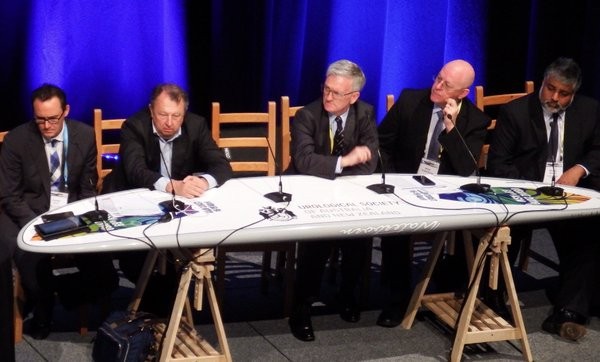 @DrRLC: “Only in Australia would a urological discussion around a surfboard be considered quite normal…”

Concurrent sessions were well attended throughout the meeting. Highlights include Thomas Knoll’s (@rockknoll) update on stone disease including his approach to difficult stones. He managed to enlighten and entertain even with topics such as “Metabolic Evaluation of Stones”! Mini-PCNL was in the spotlight with David Webb deserving of special mention. Run Wang discussed a practical approach to management of Peyronie’s disease, and Christian Gratzke (@cgratzke) discussed management of male LUTS and presented outcomes of prostatic urethral lift.

The program included non-scientific sessions titled “Getting My Message Across” (Henry Woo [@DrHWoo] & Declan Murphy [@declangmurphy]) and a fantastic education session (Stuart Philip & Melvyn Kuan [@MelvynKuan]). Trainees and consultants were updated on controlling their online presence in the internet age, publishing tips and pitfalls to avoid, and professionalism. Claus Roehrborn (@clausroehrborn) was especially illuminating on how to read a journal article. Equally, David Hillis (@dhillis1957) and Stephen Tobin (@deansurg) shared thoughts on professionalism that all surgeons would do well to heed. Speakers at the global health session inspired many to consider making an impact abroad.

The customary trainee breakfast grilling session was chaired by Nathan Lawrentschuk (@lawrentschuk) and his partner in crime, Louis Kovoussi (@DrKavoussi). Trainees were interrogated on all topics and benefited immensely from Louis’ expertise. Kurt McCammon (@mccammonka) taught the trainees on posterior urethral reconstruction, but also inspired their minds with career and life advice – a charge to be happy, do what you love, and prioritise family. His parting words “Don’t leave any potential on the table”, certainly urged trainees to, Bring out the Best from within.

Socially, the meeting was an absolute delight. Faculty dinners, industry dinners, dinners between friends and colleagues, were dotted around various restaurants all over the Gold Coast. The social highlight of the Meeting was the annual Gala Dinner, held at Australia’s Movie World, hosted by Batman and Marilyn Monroe! Alfresco style, the night was fresh and lively, with food, chatter, singing and dancing. The convenors @premrashid and @docpete888 were congratulated for a successful meeting. Prize winners were announced and congratulated: Ahmed Saeed Goolam (@asgoolam) for the BAUS Trophy, Matthew Winter (@matthewwinter01) for the Keith Kirkland prize, David Wetherell (@DrDRW) for the Villis Marshall prize, and Ailsa Wilson (@Willyedwards) for the inaugural Low-Arnold Prize in Female and Functional Urology. 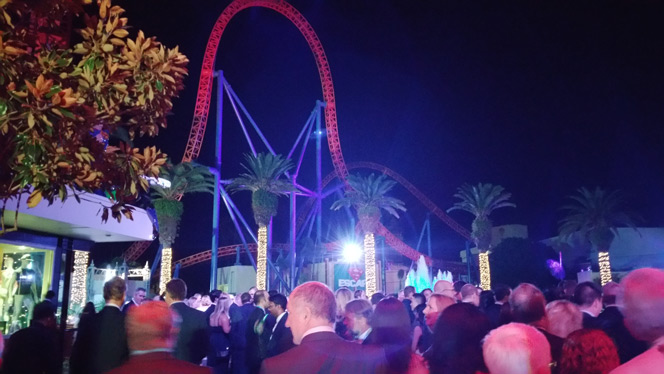 Guests siphoning into Australia’s Movie World for the Gala Dinner 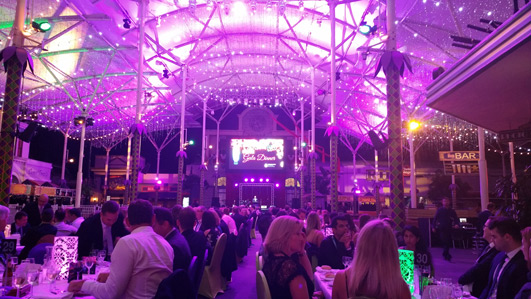 The Gala Dinner – the social highlight of the USANZ ASM

The Meeting flew by at phenomenal pace and soon it was time to pack our bags and say goodbye (or go for another surf!). Time sure flies when you’re having fun, and learning constantly! The 69th USANZ ASM surely brought out the best.

We’d like to extend our gratitude to the international and local experts who attended the meeting and generously shared of their expertise and collegiality. International guests include: Christopher Chapple, Michael Cookson, Jonathan Epstein, Prokar Dasgupta @prokarurol, Shin Egawa, Margit Fisch, Pat Fulgham (@patfulgham), Mantu Gupta, Christian Gratzke (@cgratzke), Louis Kavoussi, Thomas Knoll, Kathleen Kobashi (@kkseattle), Daniel Lin (@DanLinMD), Armando Lorenzo, Kurt McCammon, James N’Dow, Claus Roehrborn, Mark Speakman (@Parabolics), Anil Varshney and Run Wang. On behalf of ANZ Urologists and Trainees (@USANZurology), we thank you for your time, expertise, and friendship. We hope you are either enjoying some much deserved recreational time Down Under, or else have arrived safely home.

We would also like to thank the Meeting’s sponsors, in particular, platinum sponsor Abbvie for supporting the Meeting.

We are also grateful to everyone who participated in #usanz16 on social media, making #usanz16 the most active USANZ ASM on Twitter ever! With over 5 million impressions, the conference fun and science was more far-reaching than we could ever know. Thank you for helping to Bring out the Best.

A special mention for Ruth Collins (@DrRLC) for her witty tweets and Photoshop talent throughout the meeting. 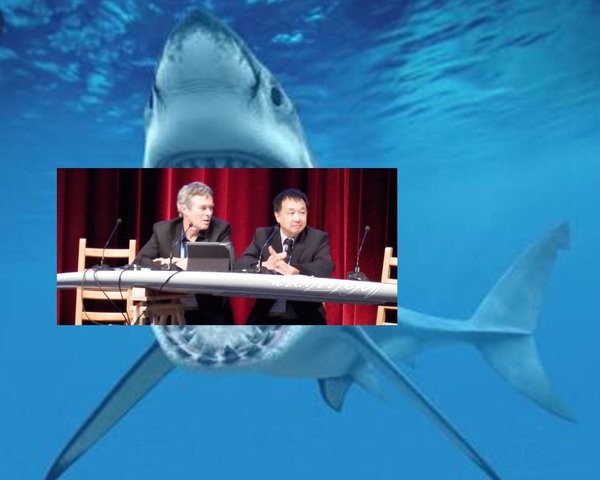 @DrRLC: “Henry Woo & David Winkle ponder the risks of hanging out on a surf board all morning #usanz16”

We look forward to the 70th USANZ ASM which will be held in Canberra, the nation’s capital (24-27th February 2017). Although the 69th USANZ ASM will be a hard act to follow, no doubt, convenors Nathan Lawrentschuk @lawrentschuk and Shomik Sengupta @shomik_s, will have some great tricks up their sleeves and we look forward to the program they have compiled. Till next time!

Amanda Chung is a Urological Surgeon and PhD candidate in Sydney, NSW and Isaac Thangasamy  @USANZUrology trainee in Queensland, Australia