The Canadian Urological Association held its annual meeting in the city of Niagara Falls, Ontario from June 22-25, 2013. Traditionally this meeting signals the start of summer in Canada and after a prolonged cool and wet spring the hot weather arrived as everyone convened. The central location in our vast country assured that the meeting was well attended with attendance far exceeding expectations. Even though I probably have seen this place two dozen times since childhood the physical spectacle of this natural wonder of the world never fails to awe.

Even renewing acquaintances with the venerable old Maid of the Mist after many years provided a memorable experience.

The meeting started on Saturday and as with other international societies, many specialty sections held their meeting on this day. These included the Canadian Urological Oncology Group (CUOG) as well as the Canadian Endourological Group (CEG). A Multi-Disciplinary Collaborative meeting for Genitourinary Cancers also took place. Canadian urology has long enjoyed a fruitful and respectful relationship with our radiation and medical oncology colleagues. The featured speaker of CEG was Dr. Brian Matlaga from @brady_urology who spoke about the role of technology assessment and health economics and how they will intersect to alter care in the treatment of urolithiasis over the next decade. I suspect the same debate will occur in many other domains of our specialty. The first of many Educational Forums also began on Saturday with a review of the management of castrate-resistant prostate cancer.

Sunday served as the formal start to the meeting with the first plenary sessions and a number of abstracts presented. Dr. Patrick Walsh from Hopkins was the keynote speaker to start things off and gave an outstanding evidence-based review as well as personal account of where we are in prostate cancer care and how we can work to improve things.

Day 1 ended with the annual CUA fun night. The CUA annual meeting has always enjoyed a reputation for being a very social meeting. Our country is relatively small and the urological community is well connected. While everyone took advantage of walking behind the falls in tunnels within the Niagara Escarpment the highlight of the night was the debut of the band “The Void”. Six talented urologists from across the country held court and provided a very high-calibre performance to the delight of everyone. They have been hired back for #cua14 in St Johns Newfoundland and I suspect will offer a member’s discount. 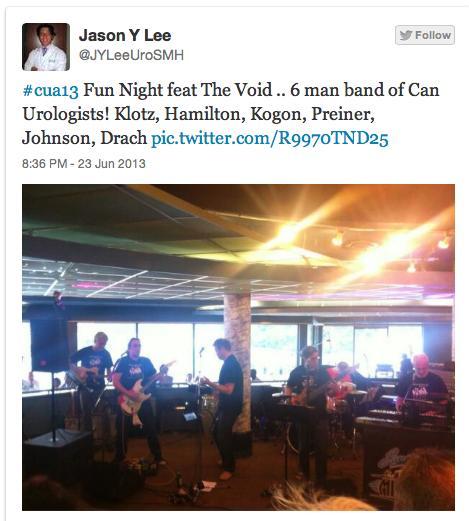 Monday June 24 brought more great abstracts and vigorous discussion. A major highlight for me was an outstanding talk given by @Robert_Uzzo of @FCCCUroOncology on the management of renal cell carcinoma in the elderly. It was a tour-de-force that was in large part philosophical discussion on managing risk and probability in clinical decision-making supported with good evidence. It was a talk that could easily be applied to most of what we do as urologists.

Dr. Andrew Macneilly the long-time program director at the University of British Columbia gave the CUA Scholars Fund address that surveyed training of residents and implications in a future environment where job prospects may be tight and where concerns about whether we have adequate volumes to teach operative skills will continue to grow.

As with the AUA and EAU the Canadian Urological Association has a well-established set of guidelines. New guidelines approved at this meeting include:

The President’s dinner on Monday night was very well attended. Dr. Klotz teamed up with half of the other member of The Void as well as Dr. Andrew Hussy from Stratford, Ontario to form a proficient jazz quartet. Four CUA Scholars Awards were given that night. Congratulations to Dr. Robert Hamilton of University of Toronto, Dr. Geoff Gotto from the University of Calgary, Dr. Lysanne Campeau from McGill University and Dr. Andrew Fiefer aka @urologymd1, also of the University of Toronto. The major disappointment of the night for me personally was the late collapse in the Stanley Cup Finals of my beloved Boston Bruins.

The final day brought with it more great educational forums and abstract presentations. A highlight for me was an address given by Dr. James Orbinski, the co-founder of Dignitas International and former president of Medicins Sans Frontieres. It was a brilliant overview on humanitarianism, global health and our role as urologists and citizens of the developed world. I think we have a strong obligation to promote these themes in our specialty.

Finally #cua13 was the year that the use of Social Media arrived in full force at the CUA. 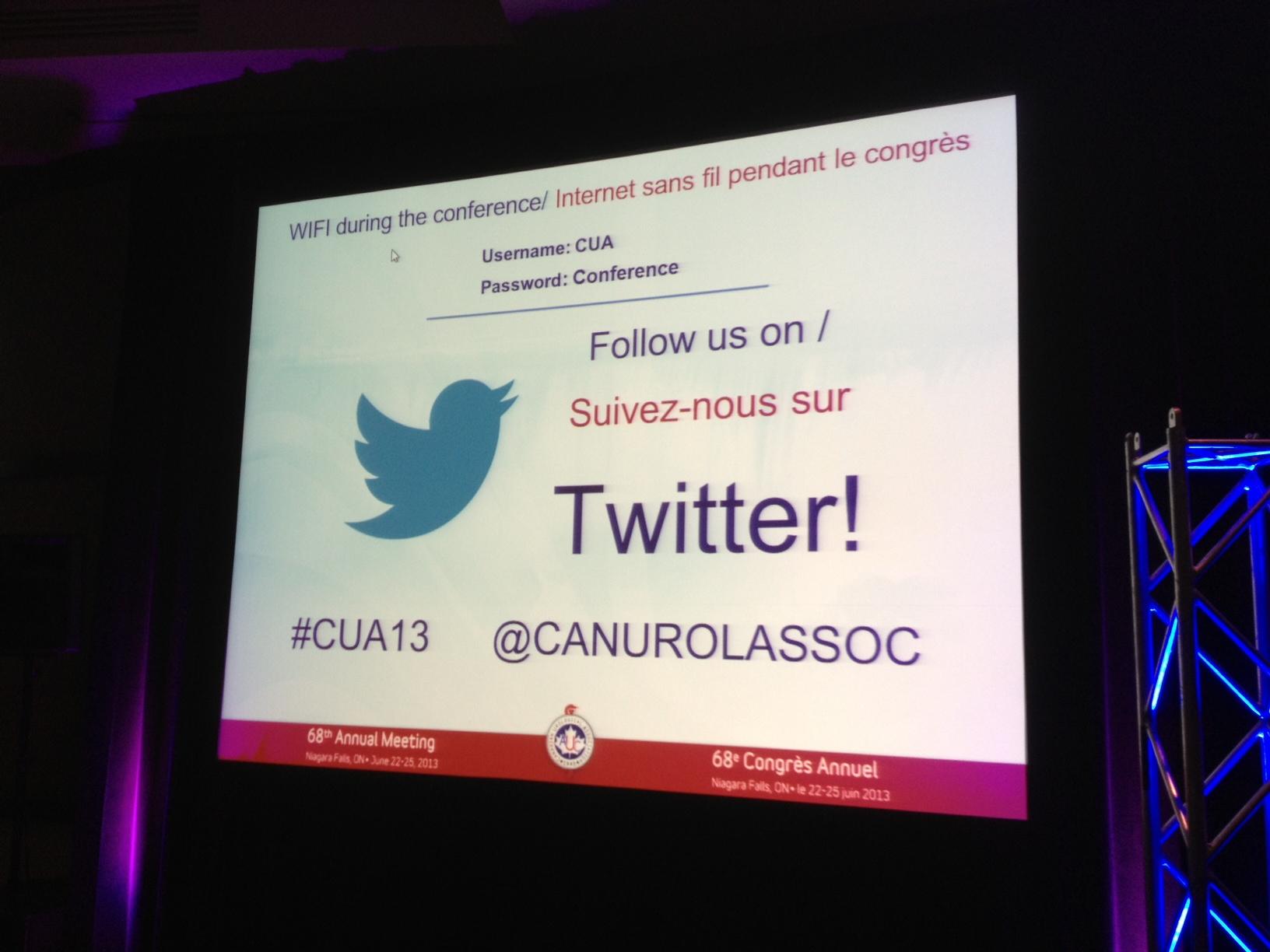 A twitter board was set up in the main meeting hall to provide a real-time update of the conversation. 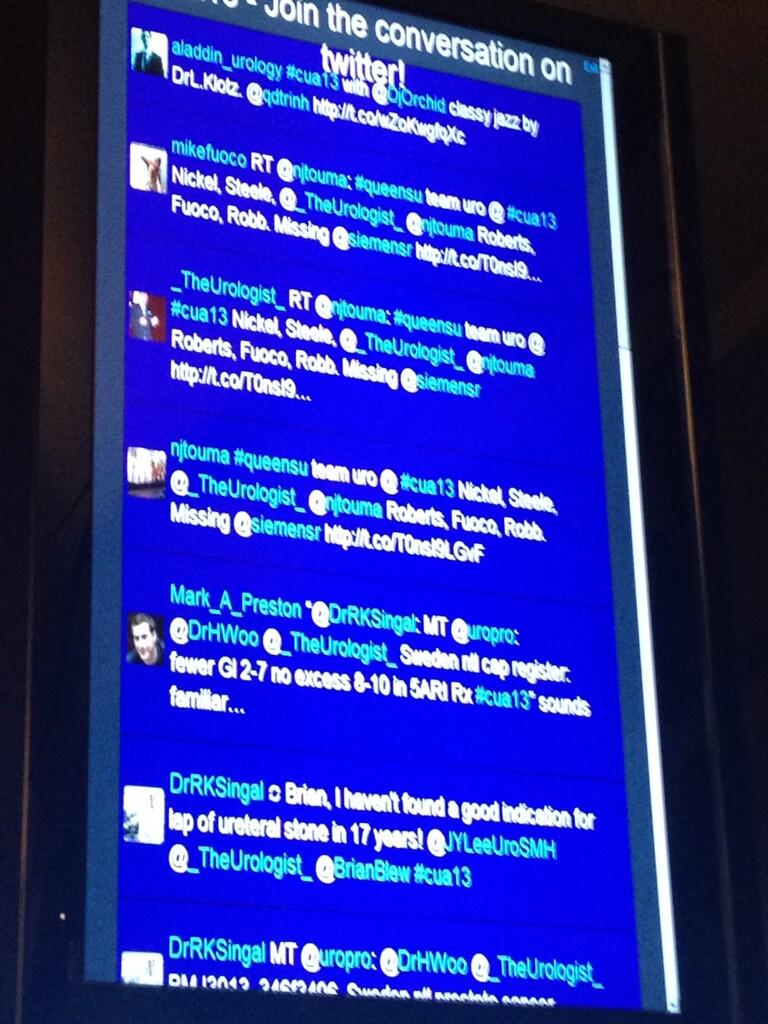 A good WIFI connection, which has been an issue at other recent meetings, served everyone very well. With a growing number of Canadian urologists now on twitter (joining early adopters including @_theurologist_, @urooncmd, @qdtrinh and myself). As these analytics show, 78 people participated via twitter during the actual meeting. 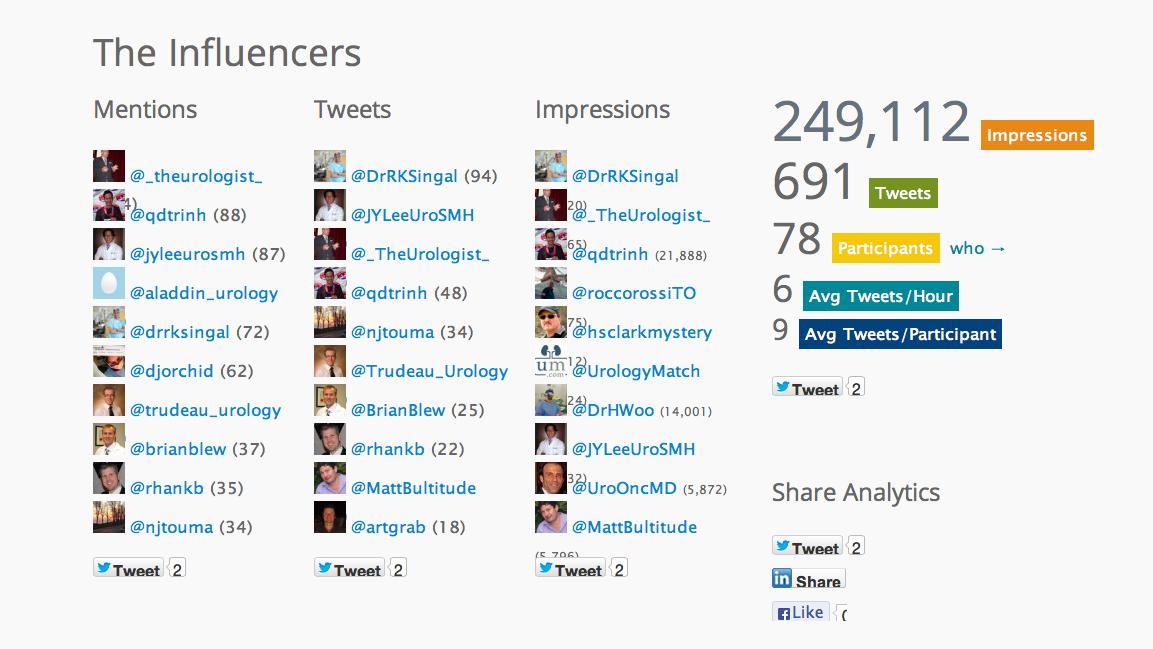 Many international colleagues joined in and @mattbultitude even made the top 10 from across the pond.

This form of communication has greatly enhanced our ability to connect and exchange ideas with colleagues from around the world. All urologists would be well advised to explore this technology. A nice primer with a Canadian perspective by @cmaer on the use of social media and twitter for physicians can be found here. At the recent #USANZ13 meeting use of Social Media for Urology was part of the scientific agenda as this presentation by @declangmurphy illustrates. I would like to see the number of participants at #cua14 surpass 200!

Of course living in Toronto made leaving on Tuesday from Niagara Falls about as easy an escape as one can make from any meeting. As we approach summer (at least in the Northern Hemisphere) I wish everyone a safe and restful time and look forward to continuing to engage with colleagues over the next year.

Dr Rajiv K Singal is a Urologist at Toronto East General Hospital and Assistant Professor in the Department of Surgery at the University of Toronto.
Follow him on Twitter @DrRKSingal

In Defence of Lance…
Scroll to top