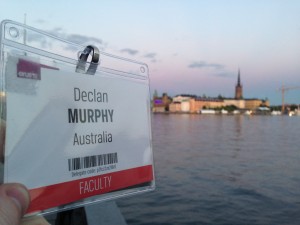 When it comes to live surgery meetings, one of the biggest and best of them all is the EAU Robotic Urology Section (ERUS) Congress (formerly the European Robotic Urology Symposium). The 10th edition of ERUS took place in Stockholm this week and continued the tradition of spectacular live robotic assisted surgery, along with scientific sessions dealing with issues around robotic assisted surgery. Following discussions with the EAU over the past two years, ERUS has now become an official section of the main EAU Organisation and future scientific and educational activity will be co-ordinated under that esteemed banner. In his welcoming address at this weeks meeting, EAU Secretary General and proud Swede Per-Anders Abrahamsson, warmly welcomed ERUS into the EAU family. He also highlighted the mission statement of ERUS, “to support science and education in the field of robotic urology”.

Over 750 delegates gathered from around the world (including a healthy delegation from Australia, South America and the USA), giving this meeting a truly global footprint. The programme featured 12 live surgical procedures performed by some of the world’s leading robotic surgeons and broadcast in full 3-D from Karolinska Hospital.

This meeting has showcased many advances in roboticsurgery over the past 10 years and this year was no exception. The audience seemed most interested in extended public lymph node dissection during radical cystectomy and prostatectomy, as well as intra-corporeal urinary diversion and complex partial nephrectomy. This year’s starring surgeons included Alex Mottrie, Peter Wiklund, Magnus Annerstedt, Geoff Coughlin, Hubert John, Aldo Bocciardi, Jean Palou, Carl Wijburg, Craig Rogers, Jim Porter, Tim Wilson, Vip Patel and Abi Hosseini. An outstanding line-up of surgeons from all over the world.

Of note, this Section has led the development of ethical guidelines around the conduct of live surgery and these have been fully endorsed by the EAU. We have previously blogged about this issue and I have blogged about my own experience of doing live surgery at ERUS 2012 in London.  As part of the live surgery ethical governance, Convener of ERUS 2012, Ben Challacombe (London), presented an update on the outcome of all patients who underwent live surgery as part of last years meeting.

The main scientific meeting was preceded by the Junior ERUS Section, the Nursing Course on Robotics, and five master classes led by experts and dealing with various aspects of robotic assisted surgery.  The Junior ERUS Prize was awarded to Khan et al who presented a poster on behalf of the International Robotic Curriculum Group entitled, “Towards a Standardised Training Curriculum in Robotic Surgery”. There were also a number of parallel meetings dealing with education and scientific activity within ERUS/EAU, in particular, the development of structured robotic training and a robotic surgery curriculum across Europe and beyond. The BJUI Editor in Chief Prokar Dasgupta, a well-known robotic surgery innovator and also an expert in simulation and education, is playing an active role coordinating development of this curriculum. European Urology Editor in Chief Jim Catto, was also present at ERUS 2013 and delivered a podium presentation outlining some of the exciting changes which the Platinum Journal will undertake once he takes over in January 2014. What is clear is that robotic surgery is an important part of the content for both of these leading journals.

Of course, this meeting has a particular reputation as being a friendly and sociable event (a point repeatedly mentioned by many of the Intercontinental visitors). The local organising committee pulled out all the stops with the official social events by hosting the welcome reception at the Stockholm City Hall, home of the famous Nobel Prize banquet each year. The gala dinner was in the spectacular Vasa Museum, surely one of the world’s most spectacular maritime museums. 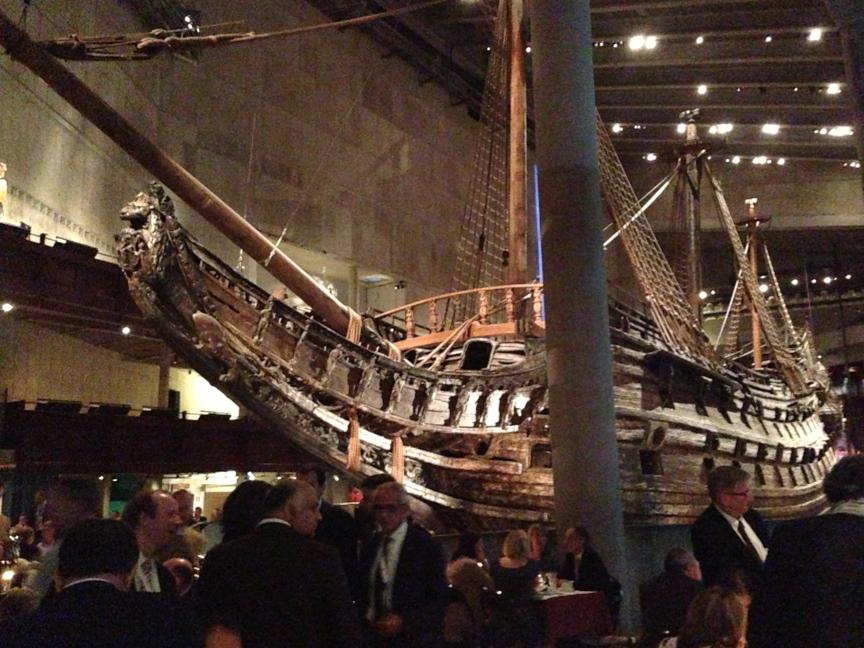 We were treated to a tour of this spectacular, fully intact 17th century warship, followed by dinner in the shadow of this huge exhibit, notorious for capsising in Stockholm harbor only 15 minutes into her maiden voyage.

As we have seen at all major urology meetings this year, social media played a prominent role in expanding the reach of the meeting and in enabling engagement from within the audience and from around the world. The conference organisers placed a Twitter feed on the panellists monitors so that questions could be directed via Twitter to the expert panels and to the operating rooms. 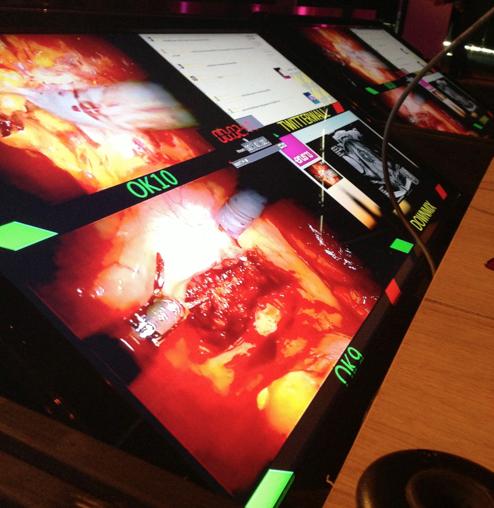 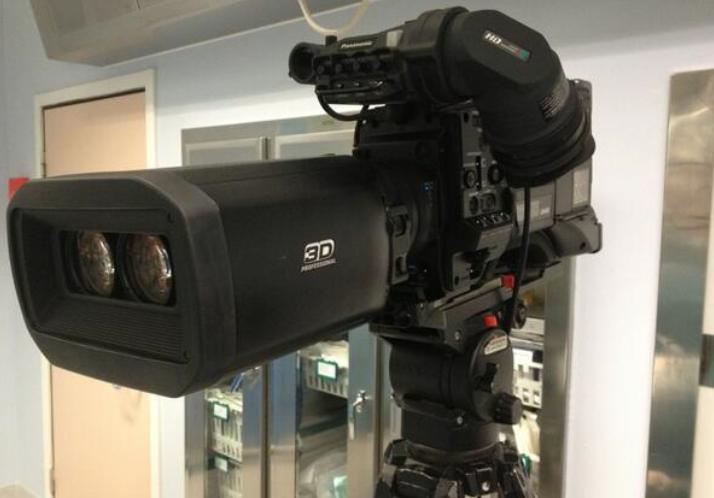 The final data from Symplur showed just how enthusiastically delegates from all over engaged with the meeting through Twitter. 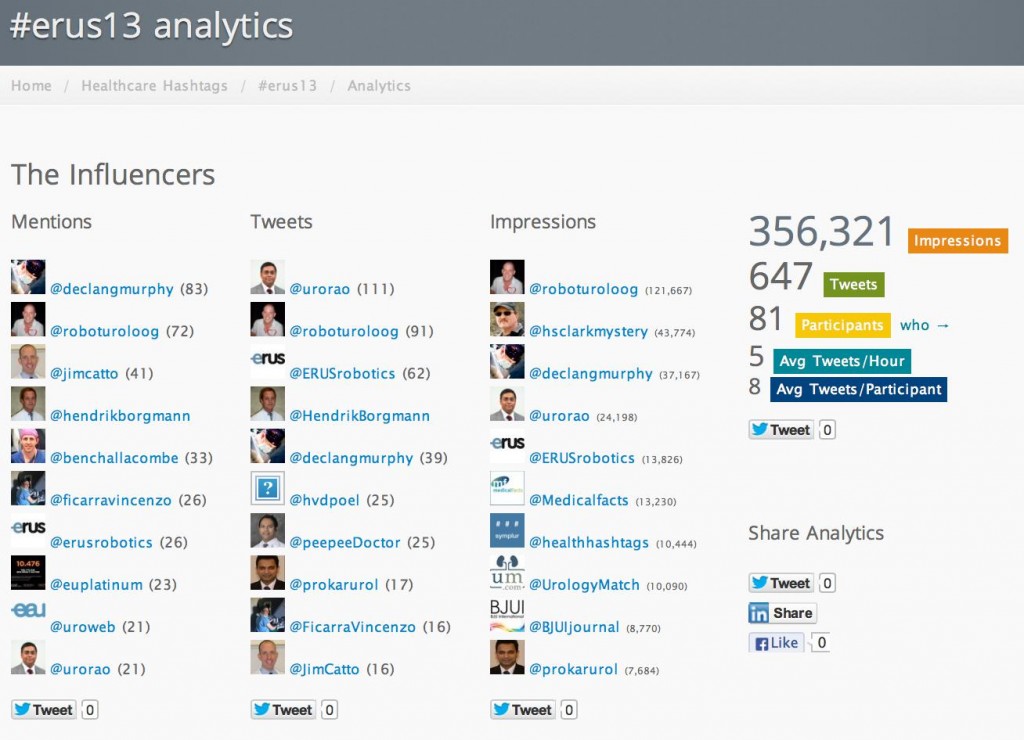 Congratulations go to the organisers and scientific committee of #ERUS13 led by Alex Mottrie (Belgium), Peter Wiklund (Stockholm) and Magnus Annerstedt (Copenhagen) who did an outstanding job putting on this complex congress.

We are already looking forward to ERUS 2014 which takes place in beautiful Amsterdam from 17- 19th September 2014, led by Chair of the Local Organising Committee, Henk van der Poel. A must-attend for anyone interested in robotic surgery.