Blog - Latest News
You are here: Home1 / BJUI Blog2 / Does Michelangelo’s David have an increased risk of prostate cancer?

Recently when researching on the Italian Renaissance master Michelangelo and his suffering with kidney stones, I stumbled upon a project on his famous masterpiece David. At the precise time, I was browsing BJUI and came across the article by Motofei et al, on the sexual side effects of finasteride as related to hand preference (right-handed or left-handed) for men undergoing treatment of male pattern baldness. This manuscript reminded me of several articles that measured different parts of the male body and correlated with the risk of prostate cancer. With this paper on my mind and at the same time looking at David, it just occurred to me whether I could predict the possibility him getting prostate cancer!

Let’s start from the beginning. Being born as a male, he had acquired a 1 in 6 chance of being diagnosed with prostate cancer and 1 in 36 chance that he would have died from it. The moment David stood erect as a toddler; the risk of getting prostate cancer became a reality. Indeed, the authors of the study go on to claim the link of erect posture of humans with BPH and infertility. For those interested, the theoretical aspects of erect posture and its effects on the male reproductive tract can be found in this review.

It is worth analyzing the David’s anthropometric measurements and bodily features from head to toe and correlate them to the current available evidence. David’s height has been calculated at being 497 cm. This, in real life would probably make him around 5’ 8” to 6’. According to the findings of the PLCO trial, being tall increased his risk of developing more aggressive prostate cancer and at a younger age. This is supported also by the findings of the ProtecT trial, which demonstrated that for high-grade tumours, there was a 23% increase in risk per 10 cm increase in height. The study group’s meta-analysis of published literature also support the increased risk of prostate cancer with increasing height.

Let us start from his head. Fortunately, David is not bald. Recent evidence suggests a strong correlation between vertex pattern androgenic alopecia and significant risk of prostate cancer. Looking at the elegance of the face, it is quite obvious that he is a clean-shaven man. Fortunately, being white, the age at which he started shaving indicating early or delayed adolescence, does not seem make his chances of getting prostate cancer worse.

A lot of research has gone into determining whether David is a right-handed or a left-handed man. If you take a closer look at the statue, the sling is held by the left hand and a rock on the right, suggesting that he could indeed be left handed, like his creator Michelangelo! Although no specific research has been carried out in prostate cancer, it has been shown in a few studies that women who are left handed are more prone to get breast cancer as compared to those who are right handed. The authors claim the effect of prenatal hormones on the foetus that determines the dominance of the side can also have effects on the breast tissue. A study found that men who were exposed to DES in utero were more likely to be left-handed. Similarly mouse experiments have shown an increased risk of prostate cancer in those exposed to DES. So, there may be a connection between left-handedness and risk of prostate cancer!

Coming to his fingers: The ratio of second to fourth digit length (2D:4D) would allow us to further assess the risk. It is now understood that the 2D:4D ratio is determined by Homeobox (Hox) a and d genes that also regulate urogenital system. What is even more interesting is the study that showed the patients with a lower 2D:4D ratio have higher risks of undergoing prostate biopsy and prostate cancer. The same group indeed went on to prove that a lower digit ratio was related to high percentage core cancer volume and higher Gleason score!

Fortunately, David’s waist circumference (WC) is within reasonable limits, thereby reducing his risk of prostate cancer. A recent study has shown that increased WC seems to be associated with high-grade disease at the time of biopsy.

It is obvious looking at David that he was not circumcised. Although aesthetically pleasing for many, there is considerable debate in the medical as well as philosophical literature whether David was circumcised or not?! Not being circumcised unfortunately increases his risk for prostate cancer.

There is a huge controversy about the size of David’s flaccid penis. Penis size has not (yet) been shown to correlate with risk of prostate cancer. Although, indirectly you conclude that because the 2D:4D digit ratio has been correlated with penis size and as shown above 2D:4D ratio has been correlated with prostate cancer. Therefore, the smaller the penis, greater the risk of prostate cancer! With so many manuscripts being published on 2D:4D ratio, I decided to research more on it and landed up on the Wikipedia page. I was astonished to find the various conclusions that have been reached with the curious case of 2D:4D ratio, including a recent study in Germany that found its correlation with male to female transsexuals!

Although not possible, but of interest would have been to measure David’s anogenital distances from anus to upper penis and from anus to scrotum. A study published in BJUI showed that a higher measurement between the anus and the penis was associated with lower risk of prostate cancer. As you may have guessed, yes there is research going on finding a relationship between anogenital distance and the 2D:4D ratio!

My interest then turned to David’s feet. Looking at it, it does seem that he would have been wearing a shoe size of 10 or 11 at least. Does it matter? Comparing his shoe size and the length of his flaccid penis, I was just reminded of the seminal paper by Jyoti Shah et al, which disproved that shoe size has got to do anything with the size of the penis. However, contrary to this paper, a study confirmed significant evidence of older age at the maximal shoe size (20.1 versus 17.6 years, P <0.05) was associated with increased risk of prostate cancer. Yes, as you may have guessed by now, there is a relationship between the 2D:4D to your penis size!

To conclude on the observations, there are several factors that increased David’s risk and several others that are protective, as shown in Table 1. I would leave it to the reader’s judgment, whether you would recommend a PSA test for David or indeed climb on to him and measure the most important parameter, the 2D:4D ratio! 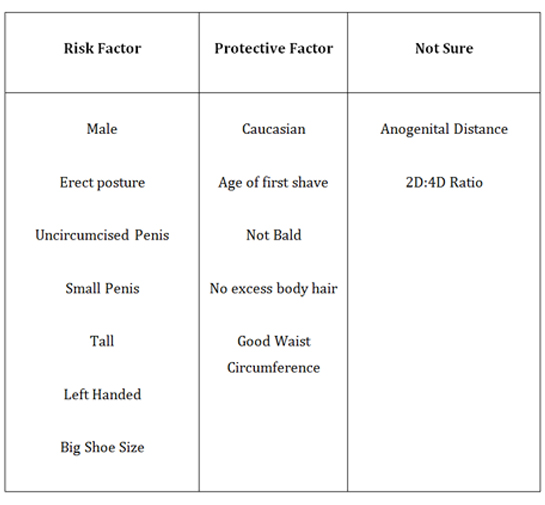 Amrith Rao is a Consultant Urological Surgeon at Wexham Park Hospital, Wexham, UK. His views are his own. @urorao

Social media @BJUIjournal: what a start!
Scroll to top