Willkommen in München! I’m happy to give you some flavours of this year’s return of the EAU meeting to my home country after nine years of absence. Let’s start of with the first little episode that many of us might have encountered: Arriving at the congress centre, it took me only 1 minute to recognize that the EAU is always racing ahead: They placed the famous red London telephone box right in the centre of the entry hall. What a start! It created the scenery of joyful anticipation of EAU 2017 in England. Congress attendees were invited to take funny pictures. Great idea to do that on the first day of the congress rather than after many days of work and party. Not surprisingly the BJUI Board jumped in and seized this opportunity. 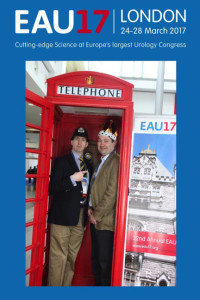 Ben Challacombe and Matthew Bultitude
posing for EAU 17 in London.

But let’s get back to the present and to Munich’s highlights on Friday. The congress kicked off with the joint meetings of the EAU and various urological societies from around the globe. The EAU has started to reach out to urologists from all countries over the couple of years – one factor on their way to being currently recognized as the world’s leading association in our specialty. The joint sessions covered a colourful range of topics from urological oncology over men’s health to functional and reconstructive urology. Highlight of the day though was of course the opening ceremony on Friday night. I gave my best shot for BJUI’s best #selfie award when asking three beautiful violin artists to smile for the camera. I wasn’t successful, but it was fun anyhow. 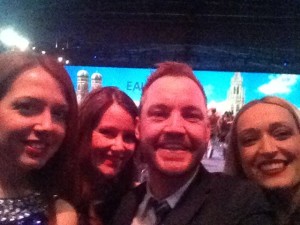 Still, the selfie experience made the girls feel so confident that they gave the audience a virtuoso, charmful atmospheric violin performance. EAU Secretary General Prof. Chapple gave out 13 awards for great achievements by pioneers in our field. Prof. Artibani received the Willy Gregoir Medal, Prof. Teillac the Frans Debruyne Life Time Achievement Award and Prof. Briganti the EAU Crystal Matula Award. Yet, the greatest honour was given to an absolute luminary in urology: When Michael Marberger received the EAU Honorary Member Award, standing ovations from the audience and an open-hearted applause created a goose bump atmosphere. There’s nothing more to say. 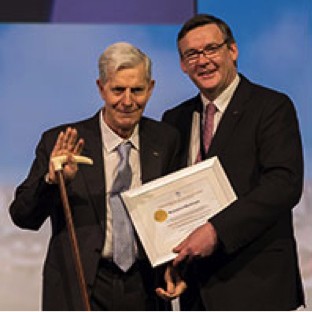 Waking up on Saturday after Friday nights activities – paying for it, as usual – drove me into the first plenary session: Evidence-based medicine vs. common practice / challenging the evidence. EAU Guidelines office chair James N’Dow and European School of Urology chair Joan Palou led the discussion, which used clinical cases to stimulate the debate between two opposing camps: pro vs. con for medical-expulsive therapy and personal experience vs. EAU guidelines for male incontinence after radical prostatectomy. The first plenary was rounded up by the AUA lecture by Abraham Morgentaler on a 40 years perspective on testosterone therapy. 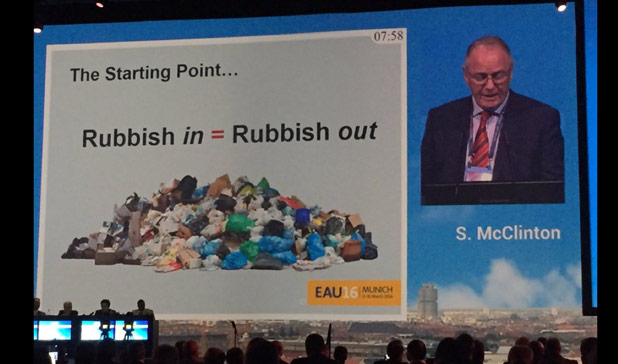 Munich’s conference centre made me cover some distance and burn some calories when rushing to the poster sessions. Funnily or annoyingly, depending on the point of view, a lot of poster presenters were fighting with rigid poster walls and poor needles. On top of that, scientific exchange was limited during the 20 minutes of poster viewing preceding the talks – shall we dedicate more time to talks instead? 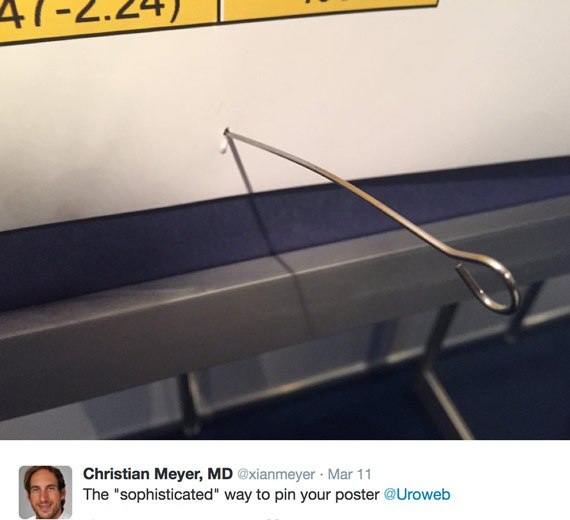 Poster presenters struggling to pin their research on stiff walls.

The EAU congress wasn’t all about the latest research though. Of course, education played a major role, which was reflected by over 70 hands-on training courses. You want to improve your surgical skills on adrenalectomy? No problem. Try out Green Light Laser Vaporisation and get advice from experts? Go ahead. Looking for advanced training on urethral stricture surgery? Sure! There were hands-on-training sessions for everybody. 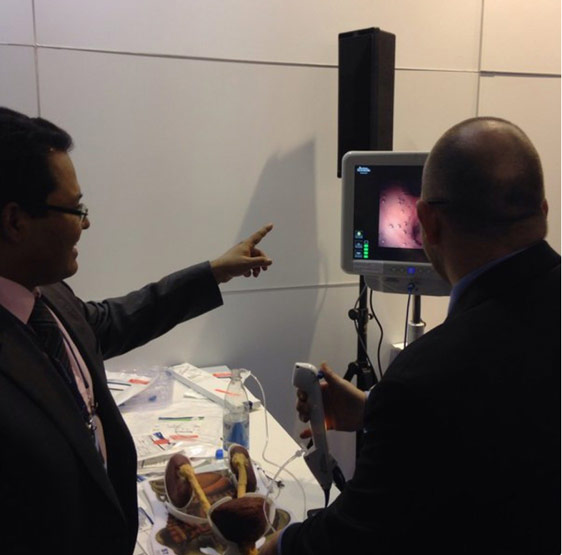 The congress wouldn’t have been the same without it’s indispensable elixir of life: LIVE SURGERY. The Urotechnology, Robotic Urology and Urolithiasis Sections shined with their latest advancements: 3D-HD laparoscopy, fluorescence partial nephrectomy, SPIES-assisted and NBI-assisted ureterorenoscopy for upper tract urothelial cancer – the spectacle went on and on. Interestingly, a working group from Italy took on the hot topic of ethics in live surgery for an important study: In their work “Live surgery: Harmful or helpful? Experience of the ‘Challenge in Laparoscopy and Robotics’ meeting” the authors retrospectively reviewed 197 live surgery cases. The authors found an acceptable overall complication rate of 11.6% according to Clavien Dindo classification. Over the course of time, the interest in live surgery seemed to remain alive, as shown by the high number of 539 participants per event. I think the study is very original and we can anticipate an interesting paper on this very soon.

Sunday morning was all about the Plenary Session on prostate cancer in the eURO Auditorium. Results of the TOOKAD® Phase III trial were highly anticipated. High noon was at 8AM when Marc Emberton presented the results of their study “TOOKAD Soluble ® versus active surveillance in men with low risk prostate cancer – a randomized phase 3 clinical trial”. 413 patients were randomized 1:1 to vascular-targeted photodynamic (VTP) therapy vs. active surveillance. Progression free survival rates were higher for VTP (28% of patients progressed) when compared to active surveillance (58% progressed; hazard ratio: 0.34; 95% confidence interval: 0.24-0.46; p<0.001). Also, fewer VTP treated men underwent radical therapy within 24-months: 6% vs. 29%, RR=0.20 [0.11-0.36].

Results from the TOOKAD study

Discussant Declan Murphy congratulated the group for the well-designed study and asked 3 questions:

1.) Does this type of very low-risk prostate cancer need intervention?

2.) What is going on in the control arm?

3.) What is the impact of TOOKAD on future intervention?

The population from the PRIAS study was comparable to the presented study population. PRIAS showed that active surveillance can be pursued safely in very low-risk prostate cancer patients. Moreover, the control arm of the TOOKAD study had much worse outcomes for histological progression, negative biopsy and need for radical intervention when compared to the PRIAS population. Finally, salvage radical prostatectomy post-TOOKAD had notable morbidity and disappointing oncological outcomes in a small study of 19 patients, which differs from outcomes observed for radical prostatectomy after active surveillance.

After this strong opening, the prostate cancer fireworks continued with debates on the role for pre-biopsy MRI, timing of radiotherapy after radical prostatectomy and indications for chemotherapy in hormone-naïve prostate cancer.

On Sunday afternoon magic happened: the #EAU16 Twitter feed took the 10,000-tweet-hurdle for the first time in #EAU Twitter history: Congratulations and thanks to all contributors. More numbers needed? Up to 15 million impressions, 1,400 users and 115 tweets/hour show that the Twitter fan community is constantly growing. No one of us knows when the boom will slow down.

Which content went viral though? See for yourself in the wordle I pulled from Tweetarchivist and the Retweet analysis from Twitonomy.

Most retweeted tweets during #EAU16.

Despite that, the social media highlight was yet to come: the famous BJUI SoMe awards! The urologic Twitterati gathered in the beautiful roof-top lounge in Munich city centre for the “cult awards” as Prokar Dasgupta (@prokarurol), BJUI Editor-in-chief, justifiably stated. We warmed up with wine or beer and felt the suspense increasing when everybody was waiting for Declan’s last-minute slide editing to the start the show. Prokar honoured the Twitter community for their huge engagement. While everybody was enjoying the show, we were coming closer to the most awaited prize: the @BJUIjournal best selfie award! Morgan Roupret (@MRoupret) and Angelika Cebulla (@AngelikaCebulla) were fighting hard for it, but it the end Maria Ribal (MariaJRibal) raced ahead and won the coveted award. But the show wasn’t over and the best was still to come in the final round: the @BJUIjournal Social Media Award 2016. Stacy Loeb (@LoebStacy) made a great proof-of-principle when initiating the #ILookLikeAUrologist campaign, which reached close to 1,000 tweets and was the well deserved award winner. 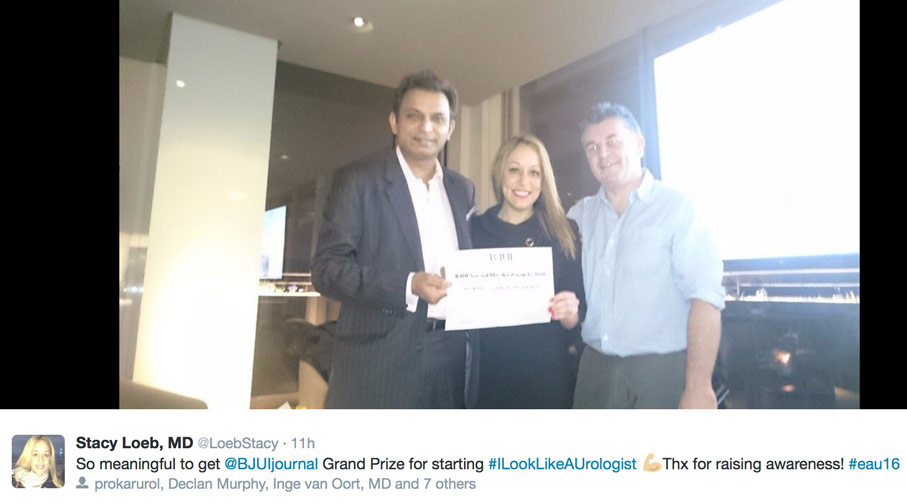 For more details of the Award winners look out for Declan’s forthcoming blog, coming to this site soon.

Video: NSAID use is not associated with erectile dysfunction risk
Scroll to top