The BJUI team was most impressed with this year’s EAU Annual Congress which has just concluded in Milan. The scientific content was excellent – topical plenary sessions from key opinion leaders; lively poster sessions; superb video sessions and very high-quality courses run by the European School of Urology. The EAU are to be congratulated on consistently raising the bar with the quality of this meeting which is reflected in the huge delegate numbers again this year.

The last two days had a number of highlights, some of which we summarise here:

We are not sure if all would agree but we do enjoy seeing the debate bouncing around the Twittersphere!

Lastly, we would again like to congratulate EAU and all the active Tweeters who contributed so much to the social media side of this year’s meeting. The final data from Symplur show huge activity which greatly expanded the reach and engagement of this meeting: 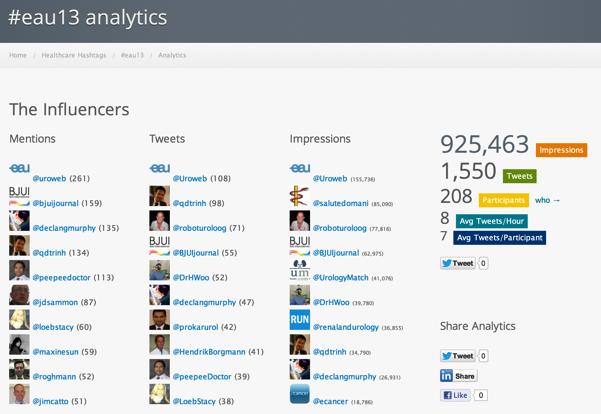 We are also very pleased that the BJUI team dominated the metrics for key influencers of #eau13 which reflects well on the strong social media strategy which we have put in place since January 2013. We were delighted to visit the busy EAU Communications back-office on the last day of the meeting to congratulate Communication Manager Evgenia “Zhenya” Starkova and her talented team who did a fantastic job running the Congress and EAU websites, twitter, facebook, video interviews etc and who we enjoyed interacting with through the week. Zhenya’s team kept tweeters engaged by awarding a “Tweet of the Day”:

EAU Official Tweets of the Day for the conference:

Saturday – “#eau13 this is not just the European meeting now. It is the world meeting! What an event.”
@benchallacombe

Sunday – “It’s going to be a tough act for Stockholm to follow! Great congress so far! #eau13”@SJGore

Monday – “I suspect #eau13 will be remembered as 1st major urology meeting to do social media seriously. It’s been great fun!”@MattBultitude

So we look forward to EAU Annual Congress 2014 which takes place in Stockholm from 11-15th April 2014. We wish Scientific Chair Arnulf Stenzl and the team at EAU Central Office all the best with planning for next year’s meeting!

We will be back with more conference coverage from the Urological Society of Australia and New Zealand Annual Scientific Meeting that takes place in Melbourne next month (#usanz13).

In Memoriam of Bill Hendry
Scroll to top