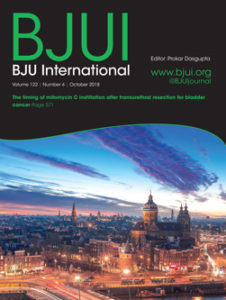 This issue’s Article of the Month is The effect of timing of an immediate instillation of mitomycin C after transurethral resection in 941 patients with non‐muscle‐invasive bladder cancer, carried out by a team from Amsterdam, The Netherlands.

The cover shows the skyline of Amsterdam, the capital of the Netherlands, although it is not the seat of government, which is The Hague. Amsterdam is well-known for its canals, its Art (particularly Rembrandt and Van Gogh) and its infamous coffee shops. In 2013 there were more bicycles than people in Amsterdam.

Re: Efficacy and safety of PAE for BPH: an observational study and propensity-matched...
Scroll to top