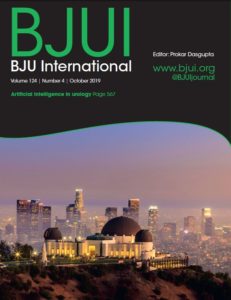 The Article of the Month for October was written by researchers primarily from Los Angeles, California, USA: Current status of artificial intelligence applications in urology and their potential to influence clinical practice

The cover image shows the Griffith Observatory, with the surrounding view of LA. The observatory is “Southern California’s gateway to the cosmos”. It is named after its creator and funder Griffith J. Griffith who wanted a free public observatory – it is now a world-leader in public astronomy and has received over 80 million visitors in its nearly 90-year history. It is also one of the best vantage points from which to view the Hollywood sign.