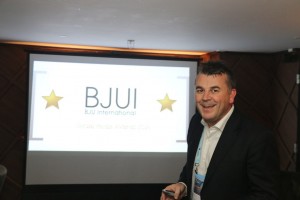 Following the inaugural BJUI Social Media Awards presented at the 2013 AUA Annual Meeting in San Diego, this year’s awards moved across the Atlantic to the EAU Annual Congress in Stockholm. Both of these conferences play host to intense social media activity and it is fitting that the BJUI Social Media Awards gets to acknowledge the Uro-Twitterati on both continents! Individuals and organisations were recognised across 16 categories including the top gong, The BJUI Social Media Award 2014, awarded to an individual or organization who has made an outstanding contribution to social media in urology in the preceding year. The 2013 Award was won by the all-conquering Urology Match portal which continues to innovate in social and digital media. There had been much anticipation and speculation ahead of time about who would win the top and bottom gongs, and whether or not the King of Twitter, Ben Davies @daviesbj, would be acknowledged

In keeping with the informality of the 2013 BJUI Social Media Awards (held in an Irish Bar in San Diego), this year’s ceremony was held in the Acoustic Bar of the Scandic Grand Central in beautiful Stockholm. Fifty of the World’s leading social media enthusiasts in urology gathered to meet up in person and to see who would be recognised. Yours truly once again played the role of MC wearing my hat of BJUI Social Media Editor, ably assisted by Matt Bultitude, BJUI Website Associate Editor, and Editor-in-Chief Prokar Dasgupta.

The full list of awardees, along with some examples of “best practice” in the urology social media-sphere can be found on this Prezi (https://prezi.com/iukizmhni9_w/bjui-social-media-awards-2014/). The winners are also listed here: 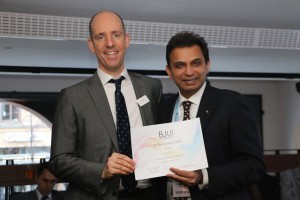 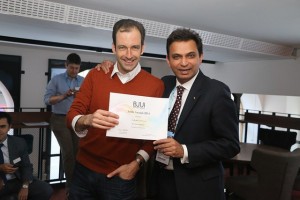 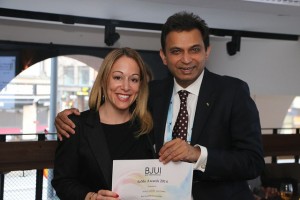 Many of the Award winners were present to collect their awards themselves, including the omnipresent Stacy Loeb who was awarded our top gong to huge applause.

A special thanks to our outstanding BJUI team at BJUI in London, Scott Millar and Helena Kasprowicz, who manage our social media and website activity and who were present on the night.

Declan Murphy is Associate Editor for Social Media at BJUI. He is a urologist in Melbourne, Australia

Not So Watchful Waiting?

Video: Prostatic urethral lift for the treatment of LUTS
Scroll to top