Blog - Latest News
You are here: Home1 / BJUI Blog2 / The BJUI and BAUS join forces at AUA in San Diego 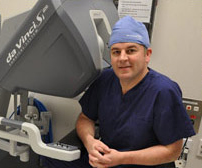 For the first time, the BJUI and our friends at the British Association of Urological Surgeons (BAUS), joined forces at the Annual Meeting of the American Urological Association to stage a satellite session focusing on some interesting areas of urology. While both BAUS and BJUI have long had strong relations and have worked together on many occasions, this was the first time we had an opportunity to present a full afternoon of plenary content at the AUA.

This year’s AUA took place in beautiful San Diego, a very popular destination for delegates, even those travelling all the way from the UK. The convention centre is very conveniently located and is state-of-the-art. The adjoining Marriott hotel hosts many of the satellite events and it was here on Sunday 5th May 2013 that the joint BAUS/BJUI session took place. We attracted over 200 delegates in the face of tremendous competition from parallel sessions and had a wonderful atmosphere all afternoon. 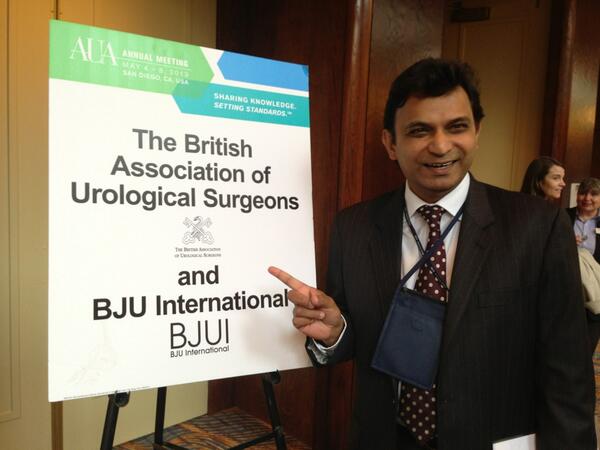 Prokar Dasgupta excited about this session at AUA Annual Meeting 2013

The second session was opened by BJUI Chairman Dr David Quinlan who gave a great introduction before handing over to BJUI Editor-in-Chief Prokar Dasgupta who Chaired the session. This was a fascinating session which combined state-of-the-art addresses from well known BJUI editors/contributors Dr John Davis, Dr Peter Gilling and Dr David Ralph, along with an exciting overview of social media and digital publishing by Prokar Dasgupta, Casey Ng and myself. The future of publishing is certainly not in paper and attendees at this session were given a wonderful preview of how urology publishing might look in the future.

The joint session finished with the presentation of the BJUI Coffey–Krane Prize, which was accepted by Dr Christian Pavlovich on behalf of his team for their paper Impact of surgical technique (open vs laparoscopic vs robotic-assisted) on pathological and biochemical outcomes following radical prostatectomy: an analysis using propensity score matching. The Prize was presented by the great Dr Coffey who gave a humorous overview after his warm introduction by Dr Quinlan. 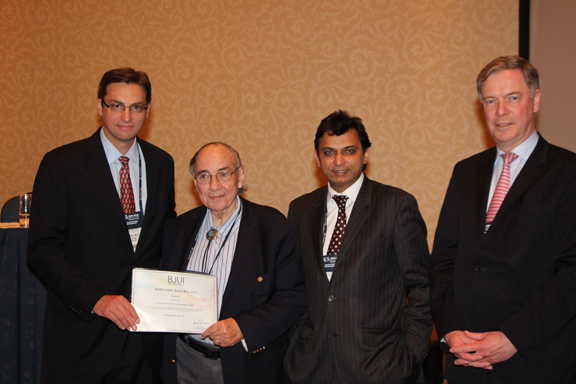 Attendees enjoyed socializing over drinks following the session and toasted the strong relationship between BAUS, the BJUI and the AUA.

We look forward to similar conjoined events in the future and are particularly looking forward to the BJUI supporting the forthcoming BAUS Annual Meeting in Manchester from 17–20th June 2013.