Squamous cell carcinoma (SqCC) and sarcomatoid carcinoma (SC) are rare subtypes of prostate cancer. We report a rare case with concurrence of SqCC, SC and adenocarcinoma in a relapsed tumour originated from adenocarcinoma.

Abstract
Squamous cell carcinoma (SqCC) and sarcomatoid carcinoma (SC) are rare subtypes of prostate cancer. We report a rare case with concurrence of SqCC, SC and adenocarcinoma in a relapsed tumour originated from adenocarcinoma. A 62-year-old man diagnosed with prostate adenocarcinoma (Gleason score 5+4=9)  received androgen blockade (AB) treatment and 89Sr radiotherapy. An increase in total prostate-specific antigen level was noted 13 months after treatment. Pathological analyses on biopsies from transurethral resection of the prostate revealed the concomitance of SqCC and SC with adenocarcinoma (Gleason score 5+5=10). Expression of the epithelial markers E-cadherin and β-catenin were significantly down-regulated, while the mesenchymal marker vimentin was up-regulated in both SqCC and SC. The expression of androgen receptor (AR) was down-regulated in SqCC but elevated in SC. The altered epithelial and mesenchymal markers and the heterogeneous AR expression in the relapsed tumour suggest that the concurrence of unusual subtypes may arise from the epithelial-to-mesenchymal transition and/or the differential function of AR on prostatic epithelial and stromal cells. The present study raises concerns about antiandrogen therapy regimen for prostate cancer.

Introduction
Prostate cancer is the most common malignant tumour in men > 70 years old and the morbidity of prostate cancer has been markedly increasing in recent years [1, 2]. Prostatic squamous cell carcinoma (SqCC) and sarcomatoid (SC) are rare subtypes of prostate cancer that account for 0.5–1% and < 0.1% of all prostate tumours, respectively [3-5]. The prognosis of patients with SqCC and SC is usually poor. Understanding the origin and initiation of SqCC and SC may benefit the development of an effective therapeutic regimen. SqCC and SC have mainly been observed after endocrine therapy or radiotherapy [4]. It has been postulated that the selection pressure from endocrine therapy is one of the driving forces for clonal selection in SqCC, but the exact mechanism underlying the occurrence of SqCC and SC de novo is not yet understood. The present study reports a rare pathological differentiation from initial adenocarcinoma to the concomitance of three kinds of pathological subtypes, adenocarcinoma, SqCC and SC. The expression of androgen receptor (AR), epithelial markers E-cadherin and β-catenin, and the mesenchymal marker vimentin in specimens before and after therapy were examined to evaluate their possible involvement in the transformation of pathological phenotypes.

Case Report
A 62-year-old patient was admitted to our hospital on 3 February 2010 with a 36-month history of progressive LUTS. Before these symptoms, there had been no previous history of urinary tract disease. His PSA level during admission was 30.5 ng/mL (Fig. 1A). The initial pathological analysis from needle biopsy led to a diagnosis of moderately differentiated adenocarcinoma with small acinar infiltration and proliferation mainly centered in the peri-acinar region (Gleason score 5+4=9, FIG. 1B, i). A bone scan revealed widespread metastases. The patient was treated with androgen deprivation therapy for 10 months as the initial regimen. During this period, 89Sr radionuclide therapy against prostate cancer was used twice, once at 4 months and once at 9 months, and the patient’s total PSA level was initially suppressed but was then elevated at a later stage (FIG. 1A). TURP was undertaken for pathological analysis at 13 months because of the increase in total PSA level (FIG. 1A). Specimens were ﬁxed intact in 4% formalin and then sectioned transversally at regular intervals for random sampling (10 points). Pathological diagnosis showed concurrent adenocarcinoma, SqCC and SC (Gleason score 5+5=10). A 55% area of the TURP specimen showed the pathological structure of adenocarcinoma with abundant clear cytoplasm and enlarged nucleolus (FIG. 1B, ii). An area of ~25% of the TURP specimen showed the differentiation of SqCC with individual cell keratinization (cytokeratin high molecular weight; FIG. 1B, vi), intercellular bridges, and/or keratin pearl formation (FIG. 1B, iii). An area of nearly 20% of the TURP specimen showed bizarre atypia with giant cells and a tumour-induced osteoclastic phenotype with S-100 positive (a marker for osteosarcoma) in SC (FIG. 1B, iv). From the 13th month to time of death, serum total PSA increased rapidly to nearly 400ng/mL (FIG. 1A).
Compared with samples from the needle biopsy, the intensities of AR (FIG. 2B), and E-cadherin and β-catenin (FIG. 3B) immunoreactivity were all significantly lowered in SqCC. Similar to the pattern in the SqCC, the expression of E-cadherin and β-catenin in specimens after therapy was also lower in SC compared with those before therapy. The expression of the mesenchymal marker vimentin was increased after therapy (FIG. 1B, x), but the expression of AR was elevated in SC (FIG. 2B, iv, viii). Moreover, the AR C-terminal ligand-binding domain was mainly located in the cytoplasm of osteosarcomatous cells (FIG. 2B, iv), while the AR N-terminal transcription activation-binding domain was mainly located in the nucleus of osteosarcomatous components (FIG. 2B, viii). 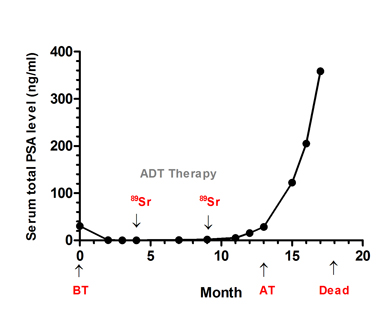 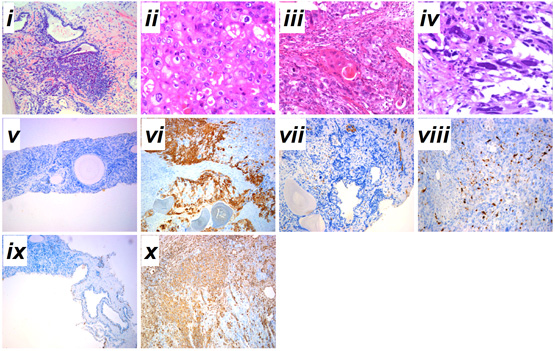 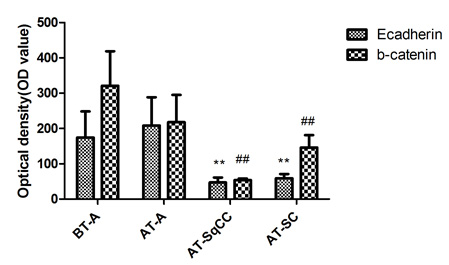 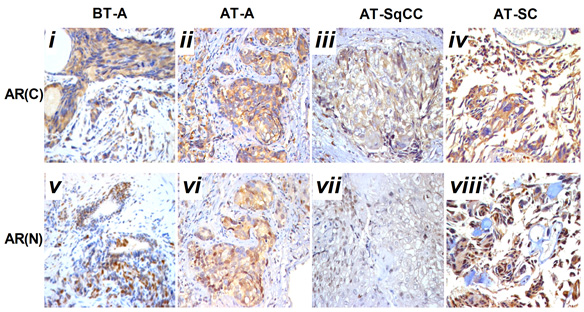 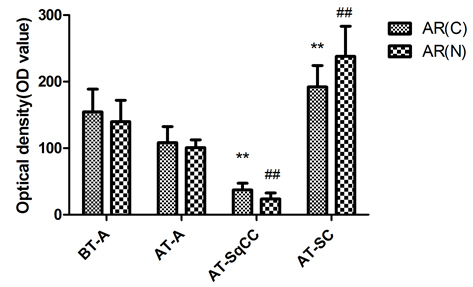 Discussion
Sarcomatoid carcinoma and SqCC are unusual histological prostatic tumours with a low incidence rate. About half of them can arise from patients with initial acinar adenocarcinoma after endocrine therapy or radiotherapy [4], but the mechanism underlying the occurrence of histological variants of prostate carcinoma remains unknown. In the present case, the concurrence of SqCC and SC was observed in a relapsed tumour originated from adenocarcinoma. The characteristics of the unusual concurrence of multiple carcinoma may provide some clues as to the pathogenesis of histological variants of prostate cancer.
Serum PSA level is the main indicator for estimating the prognosis of prostate cancer [6]. It has been reported that PSA can regulate and transactivate AR expression in prostate cancer cells [7]. During the initial phase of antiandrogen therapy, serum PSA concentration decreased, then rapidly increased at a later stage (FIG. 1A), indicating insensitivity to the hormone therapy [8]. Pathological analysis of the specimens from the needle biopsies suggested that primary multifocal adenocarcinoma tumour occurred both in the right and left lobes. Even with androgen deprivation therapy and radionuclide therapy, the total PSA level of the patient rose gradually from the 13th month (FIG. 1A), therefore, TURP was undertaken for more precise pathological analysis. Intra-operative localization in the TURP specimen indicated that extensive multifocal carrion-like tissues were found in the the middle, left and right lobes of the prostate. Samples from all the three lobes were found to be tumours, based on histological features and immunohistochemical evidence of epithelial and sarcomatoid-like differentiation, including vimentin (FIG. 1B, x) and PSA (FIG. 1A).
Histological analysis of the relapsed tumour found adenocarcinoma, SqCC and SC and revealed a lower AR expression in the area of SqCC, but a significantly higher AR expression in the SC region. Furthermore, the AR C-terminal domain was mainly localized in the cytoplasm of giant cells and tumour-induced osteoclastic cells in the SC, while the AR N-terminal transcription activation-binding domain was mainly in the nucleus of the above cell types. AR has been shown to exert dual functions in prostate cancer proliferation and metastasis. On the one hand, it acts as a suppressor in prostate epithelium, on the other hand, it promotes proliferation in stroma [9, 10]; therefore, the differential expression of AR in relapsed tumour may contribute to the differential response and insensitivity to antiandrogen therapy in the patient [11].
A number of studies have shown that adenocarcinoma can undergo the epithelial-to-mesenchymal transition (EMT) in order to migrate and invade other tissues [12, 13]. EMT is also considered to be a de-differentiation process, which is associated with the loss of epithelial markers and gain of mesenchymal markers [14]. In the present case, mixed populations of E-cadherin- (FIG. 3A, ii, iii) and β-catenin- (FIG. 3A, vi, vii) negative and positive cells were detected in the region between the junction of adenocarcinoma and SqCC. Moreover, down-regulation of E-cadherin (FIG. 3A, iii, iv) and β-catenin (FIG. 3A, vii, viii) and up-regulation of the mesenchymal marker vimentin (FIG.1.Bx) was found in the areas of both SqCC and SC, suggesting that the relapse of three subtypes of prostate cancer may be partially originated from a stem-like cell from the EMT of initial adenocarcinoma; however, the signal that triggers the EMT process in this case remains unknown. Interestingly, it has been suggested that androgen can trigger EMT in prostate tumour epithelial cells, and the effect is inversely correlated with expression levels of AR [15]. While we proposed that EMT may contribute to SqCC, SC and possibly other undifferentiated histological variants of the prostate cancer, the association between AR and EMT suggest that the occurrence of SqCC and SC from the initial adenocarcinoma may be a consequence of the antiandrogen treatment.

Conclusion
The alteration in epithelial and mesenchymal markers and differential AR expression may underlie the concurrence of multiple carcinoma in this case of prostate cancer. The insensitivity of the patient to antiandrogen treatment with a rapid increase in PSA level and the observed differential expression of AR in SqCC and SC raise doubts about the treatment regime, which warrants future investigation.

Acknowledgement
This work was supported by grants from the national High Technology Research and Development Program of China (863 Program, 2006AA02A302 and 2009AA022707) and Bank of Clinical Data of Major Diseases and Biological Specimens of Shenzhen (CXC201005260001A). The authors wish to thank Prof Hsiao Chang Chan (The Chinese University of Hong Kong, Department of Physiology, Epithelial Cell Biology Research Center, China) for her critical comments on the manuscript.

Editorial: What is the optimal length of time for SNM testing?
Scroll to top