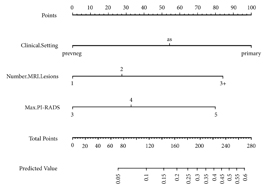 A consecutive sample of men undergoing TRUS/MRI‐fusion‐guided biopsy with the UroNav® system (Invivo International, Best, The Netherlands) who also underwent concurrent systematic biopsy was included. By comparing the grade of cancer diagnosed on targeted and systematic biopsy cores, we identified cases where clinically significant disease (Gleason score ≥3+4) was only found on systematic and not targeted cores. Multivariable logistic regression analyses were used to identify predictive factors for finding significant cancer on systematic cores only. We then used these data to develop a nomogram and evaluated its utility using decision curve analysis. 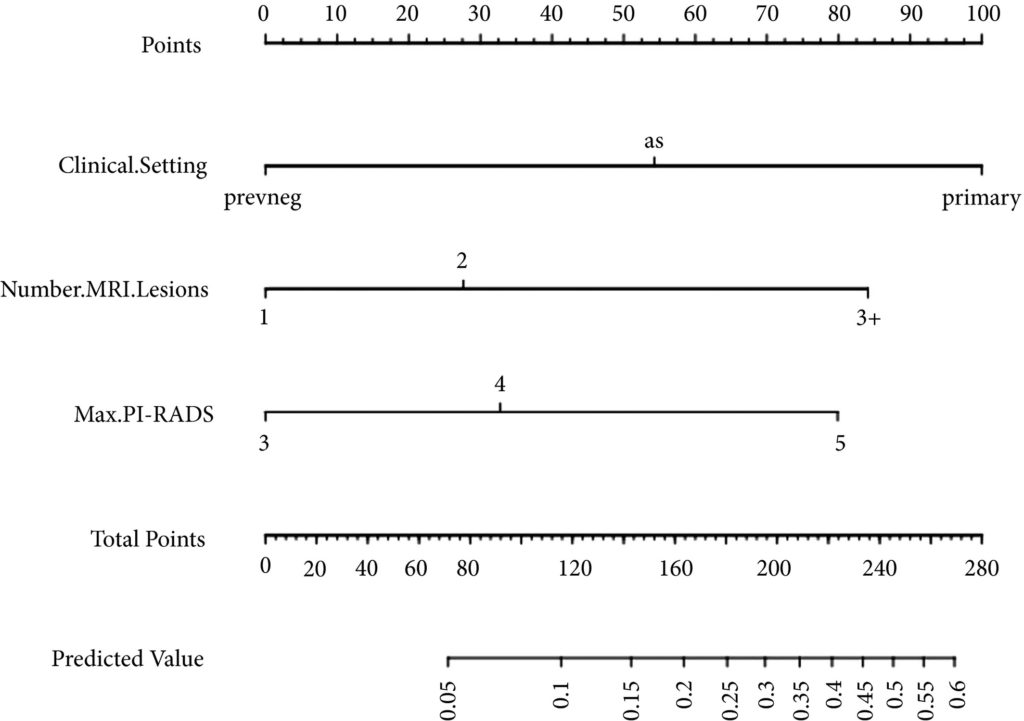 Fig 1. Nomogram for predicting the diagnosis of clinically significant on systematic biopsy only and missed on targeted biopsy.

Of the 398 men undergoing TRUS/MRI‐fusion‐guided biopsy in our study, there were 46 (11.6%) cases in which clinically significant cancer was missed on targeted biopsy and detected on systematic biopsy. The clinical setting, number of MRI lesions identified, and the highest Prostate Imaging‐Reporting and Data System (PI‐RADS) score of the lesions, were all found to be predictors of this. Our model had a good discriminative ability (concordance index = 0.70). The results from our decision curve analysis show that this model provides a higher net clinical benefit than either biopsying all men or omitting biopsy in all patients when the threshold probability is <30%.

We found that omitting concurrent systematic biopsy in men undergoing TRUS/MRI‐fusion‐guided biopsy would miss significant disease in more than one in 10 patients. We propose a prediction model with good discriminative ability that can be used to improve patient selection for performing concurrent systematic biopsy in order to minimise the number of missed significant cancers. It is important that our model is validated in external cohorts before being employed in routine clinical practice. 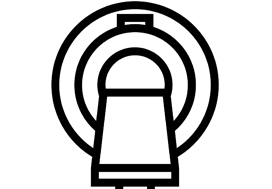 In clinical practice, the need for maximising prostate cancer detection is often balanced against the theoretical risks of infection, bleeding, and pain associated with taking additional cores. In this novel study, Sathianathen et al. [1] provide a tool for measuring the oncological benefit of including concurrent systematic biopsy (SB) at the time of MRI‐guided targeted biopsy (TB). There were several key findings: (i) Amongst patients undergoing MRI‐guided biopsy (all biopsy settings), 11.6% were found to have significant cancers detected by SB alone; (ii) Amongst patients who had clinically significant cancers detected by SB alone, 52.2% were sampled within sextants outside the targeted regions of interest; (iii) According to the proposed nomogram, patients with prior negative biopsies, fewer MRI lesions, and lower Prostate Imaging‐Reporting and Data System (PI‐RADS) scores were at the lowest risk of missing significant cancer when SB was omitted.

Based on the present study, biopsy setting appears to be a key factor for deciding whether to omit SB. In the subset of patients undergoing primary biopsy, the authors found that 18.5% of cancers were detected by SB alone. These results are consistent with those of the MRI‐FIRST trial, which showed 14% of cancers were detected by SB only, 20% by TB only, and 66% by combining both techniques [2]. MRI‐FIRST concluded that in the primary biopsy setting, there was no difference between SB and TB in detection of clinically significant prostate cancer, although combining both techniques provided the highest detection rate.

Prior negative biopsy cohorts are generally at lower risk of harbouring significant cancer, as many cancers have already been ‘selected out’ by initial biopsies. In this setting, TB plays an important role in sampling tumour foci in difficult‐to‐reach regions of the prostate (e.g., anterior and apical) [3]. According to the authors’ nomogram, prior negative biopsy patients were least likely to benefit from concurrent SB. While the authors suggest a paradigm of selectively omitting SB, some authors have proposed omitting both TB and SB altogether in select patients. A previously reported multi‐institutional nomogram can be used to predict benign pathology after MRI‐guided biopsy, which can help reduce the number of unnecessary biopsies after MRI in the prior negative biopsy setting [4]. This clinical tool was further externally validated and optimised by Bjurlin et al. [5].

The ‘active surveillance (AS)’ setting typically refers to a confirmatory MRI‐guided biopsy in men with Grade Group 1 prostate cancer prior to enrollment in AS. Recently, the presence of cribriform morphology in Grade Group 2 patients was confirmed to be a key poor prognostic feature that would exclude patients from AS [6]. The present study, however, did not account for different Gleason pattern 4 morphologies in their analysis, as ‘significant cancer’ was defined by Grade Group alone. Studies by independent groups have found that TB combined with SB was more accurate than either modality alone for detecting cribriform at the time of MRI‐guided biopsy [7, 8]. Therefore, concurrent SB is required to properly sample cribriform cancers in patients who are considering AS.

In this study, Sathianathen et al. [1] provide clinicians with a clinical tool for quantifying the added oncological value of concurrent SB. However, concurrent SB is probably prudent for most patients, particularly for those considering AS or focal therapy for which accurate determination of whole gland grade, cancer volume, and cribriform status are essential. As reducing the number of cores has not yet been shown to reduce biopsy‐related complications, are we willing to suboptimise cancer sampling without proven compensation?