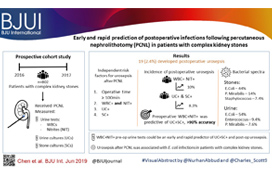 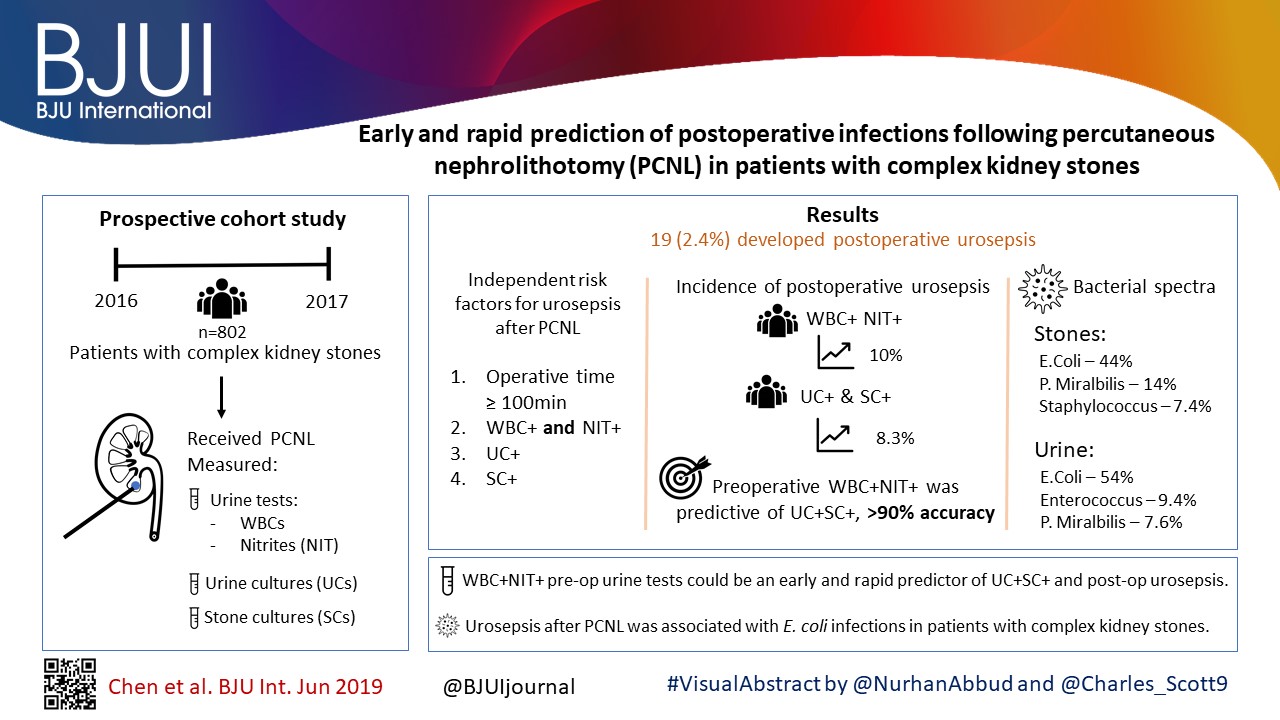 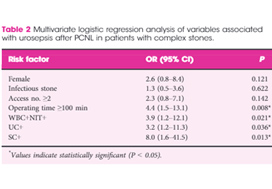 In addition to the article itself, there is an editorial  and a visual abstract prepared by prominent members of the urological community. These are intended to provoke comment and discussion and we invite you to use the comment tools at the bottom of each post to join the conversation.

A total of 802 patients with complex kidney stones who underwent PCNL, from September 2016 to September 2017, were recruited. Urine tests, urine cultures (UCs) and stone cultures (SCs) were performed, and the perioperative data were prospectively recorded. 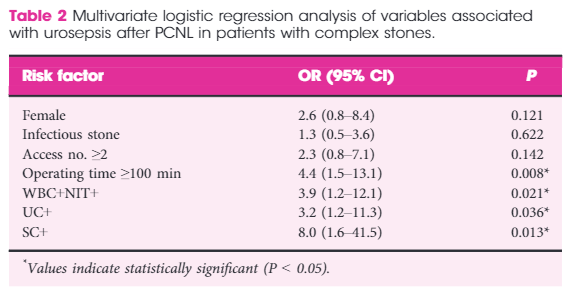 In all, 19 (2.4%) patients developed postoperative urosepsis. A multivariate logistic regression analysis revealed that an operating time of ≥100 min, urine test results with both positive urine white blood cells (WBC+) and positive urine nitrite (WBC+NIT+), positive UCs (UC+), and positive SCs (SC+) were independent risk factors of urosepsis. The incidence of postoperative urosepsis was higher in patients with WBC+NIT+ (10%) or patients with both UC+ and SC+ (UC+SC+; 8.3%) than in patients with negative urine test results or negative cultures (P < 0.01). Preoperative WBC+NIT+ was predictive of UC+SC+, with an accuracy of >90%. The main pathogens found in kidney stones were Escherichia coli (44%), Proteus mirabilis (14%) and Staphylococcus (7.4%); whilst the main pathogens found in urine were E. coli (54%), Enterococcus (9.4%) and P. mirabilis (7.6%). The incidence of E. coli was more frequent in the group with urosepsis than in the group without urosepsis (P < 0.05).

WBC+NIT+ in preoperative urine tests could be considered as an early and rapid predictor of UC+SC+ and postoperative urosepsis. Urosepsis following PCNL was strongly associated with E. coli infections in patients with complex kidney stones.

In this month’s BJUI, Chen et al. [1] report on a large series of percutaneous nephrolithotomy (PCNL) procedures from Guangzhou in China. The authors studied patients who developed postoperative urosepsis and looked for any predictive factors that would herald impending sepsis.

In this latest report, the authors analysed 802 patients with complex kidney stones undergoing PCNL in a single centre. ‘Complex’ was defined as complete staghorn, partial staghorn or pelvic stone with at least two calyceal stones. Midstream urines (MSU) were collected and analysed for white blood cells (WBC) and nitrites (NIT). Antibiotics were given preoperatively if the urine culture (UC) was positive for WBC (WBC+) or NIT (NIT+). Standard single‐dose antibiotic was given on induction of anaesthesia and only continued for 48 h if the culture was positive. Stone cultures (SCs) were routinely collected. Of the 802 patients, UCs were positive (UC+) in 171 (21%) and SCs subsequently positive (SC+) in 30%. Postoperatively, 98 (12%) developed a fever, 62 (7.7%) developed systemic inflammatory response syndrome (SIRS), and 19 (2.4%) developed sepsis as defined by the quick Sequential (sepsis‐related) Organ Failure Assessment (qSOFA).

The authors also report on the bacterial findings of the UCs and SCs. In the SCs, Escherichia coli (44%), Proteus mirabilis (14%) and Staphylococcus (7.4%) were the most common; whilst in the UCs, E. coli (54%), Enterococcus (9.4%) and P. mirabilis (7.6%) were predominant. It is important to remember the potential differences when interpreting UCs preoperatively and to ensure broad‐spectrum cover is given and this justifies the sending of SCs, particularly in high‐risk patients [1].

The recognition of early sepsis is paramount and has been recognised in previous studies leading to the ‘golden hour’, when early aggressive treatment of the infection has been shown to lead to better outcomes [2]. In a large study by Kumar et al. [2], early antimicrobial administration (within the first hour of hypotension from septic shock) led to a higher overall survival; but worryingly, only 50% of patients received appropriate antibiotics within 6 h. Thus, if high‐risk patients could be predicted then closer monitoring, aggressive fluid management, and early broad‐spectrum antibiotics with intensive care support could be targeted at those specific patients.

There are multiple definitions for infection, e.g., sepsis, severe sepsis, septic shock, and SIRS. The 2016 International Consensus attempted to clarify these and defined sepsis as ‘A life‐threatening organ dysfunction due to dysregulated host response to infection’ [3]. They found the term ‘severe sepsis’ to be obsolete. Septic shock is defined as ‘a subset of sepsis in which particularly profound circulatory, cellular, and metabolic abnormalities are associated with a greater risk of mortality than with sepsis alone’ [3]. The Consensus recommended organ dysfunction is assessed by a SOFA score increase of ≥2, as this is associated with a mortality of 10%. This then led to the bedside assessment clinical score called qSOFA. Poorer outcomes were associated with two or more of the qSOFA criteria: respiratory rate ≥22 breaths/min, altered mentation (as judged by the Glasgow Coma Scale), and systolic blood pressure ≤100 mmHg.

In this current study [1], many of the factors associated with postoperative sepsis are logical and have been demonstrated before, e.g., female sex, infection stone, prolonged operating times, and multiple accesses. This paper has shown that careful attention to the preoperative urine dipstick can provide important prediction of potential severe infective complications postoperatively. In an era of antibiotic stewardship this could help guide targeted preoperative and prolonged postoperative antibiotics for a small group of patients, whilst managing WBC–NIT– patients with standard prophylaxis only. The high‐risk group should also be observed very closely postoperatively and moved to a high‐dependence setting rapidly if clinical signs of sepsis develop. It would also suggest that in this high‐risk group, operating times and intra‐renal pressure should be minimised. It may be that in these patients it is better to use larger tract PCNL sizes to allow rapid fragmentation and evacuation of the stone and that consideration should be given to staged procedures in complicated stones where multiple access is being considered to minimise operating time and allow analysis of intraoperative SCs.

It should of course be remembered that antibiotic decisions should be based on local policies and sensitivities, which may be very different from this population. Rapid treatment of sepsis is paramount and the most recent ‘Hour‐1’ bundle provides the most up‐to‐date guidance for immediate resuscitation and management with lactate management, blood cultures, broad‐spectrum antibiotics, i.v. fluids, and early use of vasopressors if the blood pressure does not respond to fluid replacement [4].

by Matt Bultitude and Kay Thomas