Finally, the third post under the Article of the Week heading on the homepage will consist of additional material or media. This week we feature a video from Klaus Brasso, discussing his paper.

To investigate whether the International Society of Urological Pathology (ISUP) 2005 revision of the Gleason grading system has influenced the risk of biochemical recurrence (BCR) after radical prostatectomy (RP), as the new guideline implies that some prostate cancers previously graded as Gleason score 6 (3 + 3) are now considered as 7 (3 + 4).

A matched-pair analysis was conducted. In all, 215 patients with Gleason score 6 or 7 (3 + 4) prostate cancer on biopsy who underwent RP before 31 December 2005 (pre-ISUP group), were matched 1:1 by biopsy Gleason score, clinical tumour category, PSA level, and margin status to patients undergoing RP between 1 January 2008 and 31 December 2011 (post-ISUP group). Patients were followed until BCR defined as a PSA level of ≥0.2 ng/mL. Risk of BCR was analysed in a competing-risk model. 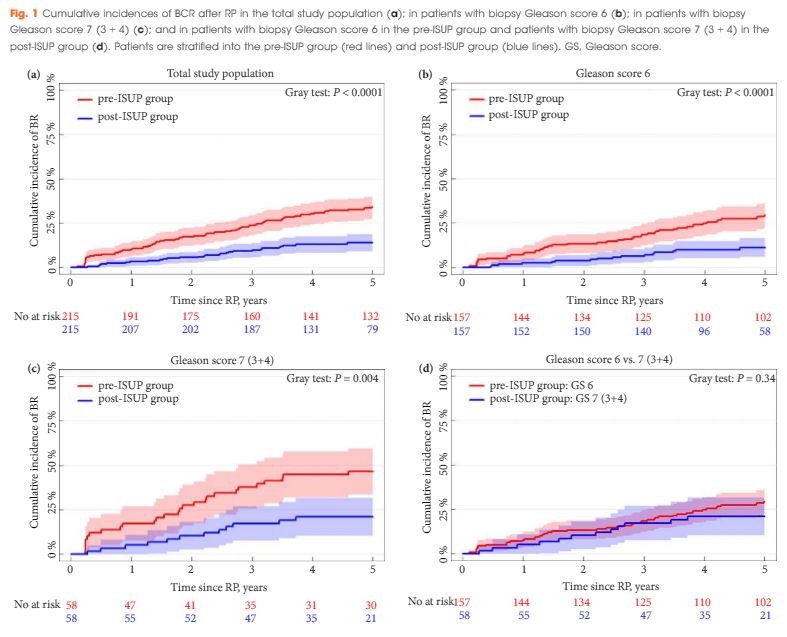 The revision of the Gleason grading system has reduced the risk of BCR after RP in patients with biopsy Gleason score 6 and 7 (3 + 4). This may have consequences when comparing outcomes across studies and historical periods and may affect future treatment recommendations.

Read more articles of the week
Editorial: Current Gleason score 3 + 4 = 7: has it lost its significance compared...

June’s BJUI – About the Cover
Scroll to top