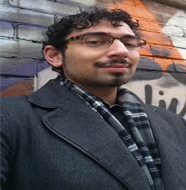 The #RadOnc Journal Club continued its success in Movember with over 700 tweets from 60 participants in a three-day discussion on smoking and prostate cancer radiation treatment outcomes. Thanks to the generosity of the BJUI (@BJUIJournal) and Prof. Prokar Dasgupta (@prokarurol), the study of a large retrospective cohort of localized prostate cancer patients who received external beam radiation treatment from Memorial Sloan Kettering (@sloan _kettering) was open-access and engaged a wide audience.

Sharing best practices on the role of radiation treatment from around the world:

The state of tobacco use: 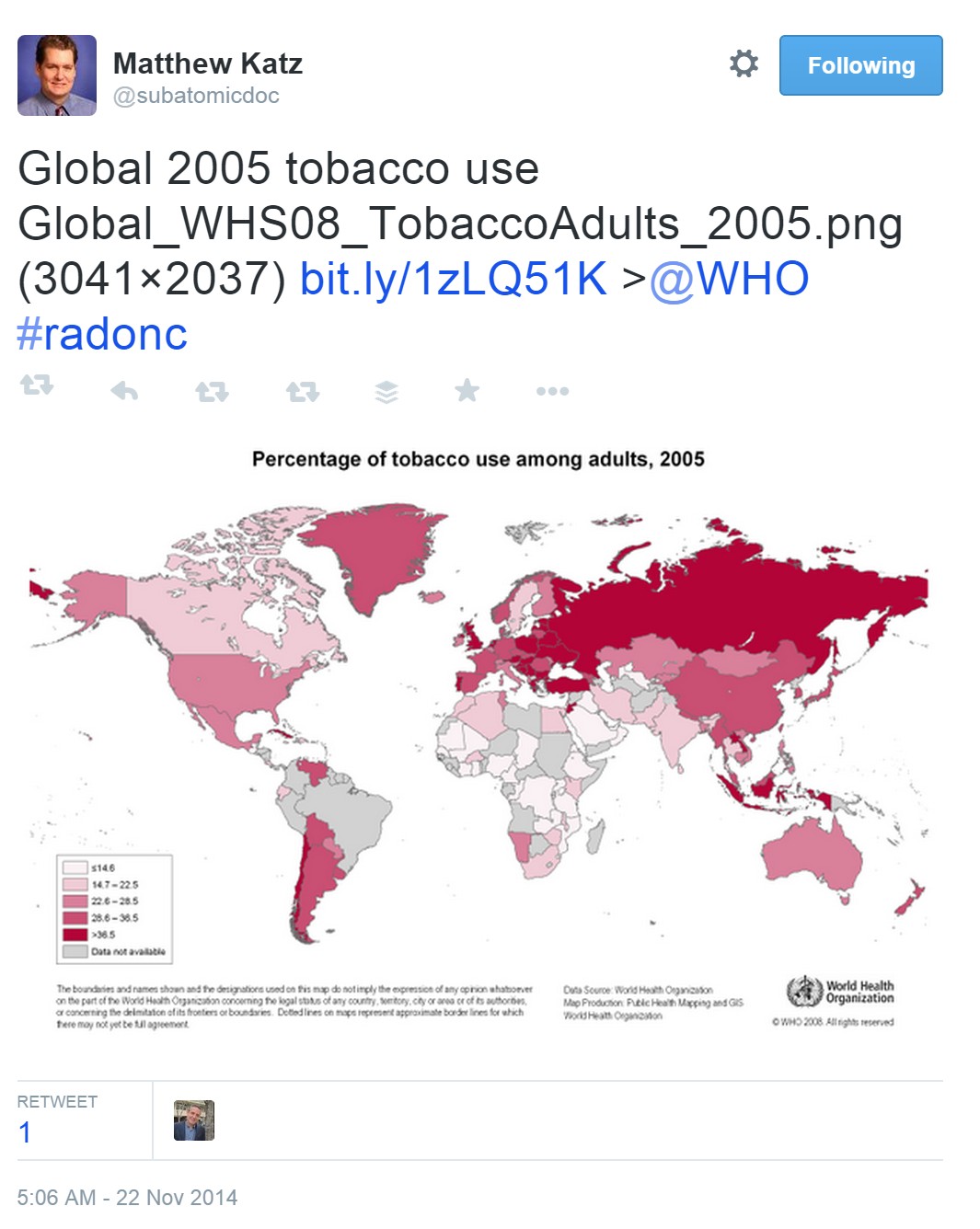 And smoking cessation from an interdisciplinary audience: 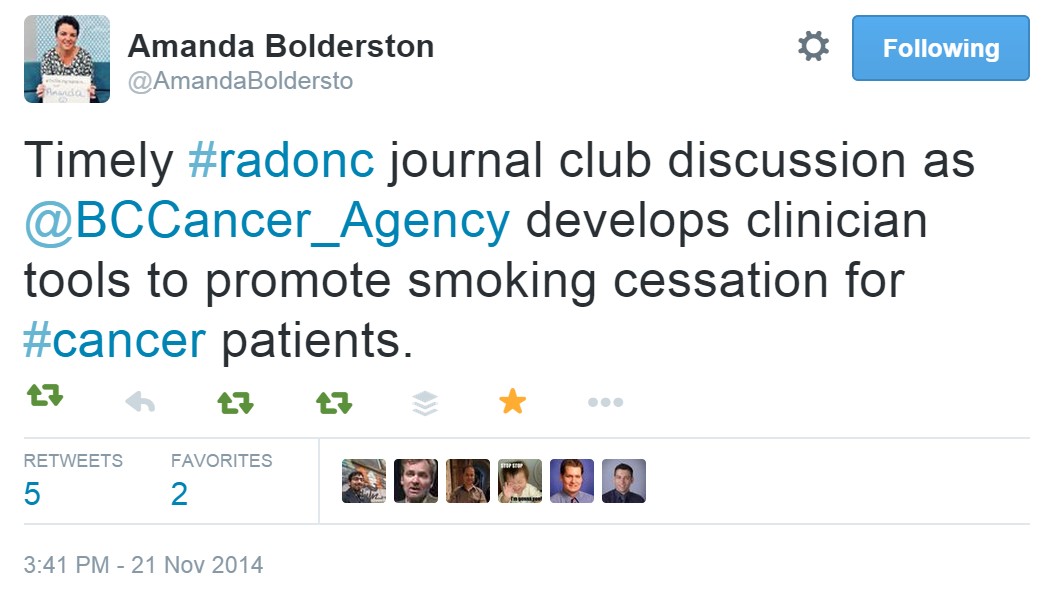 On Sunday, the community came together for a live discussion with study author Emily Steinberger (@easteinberger). Participants explored roles for radiation treatment and the reduction of side effects including hypofractionated treatment and current guidelines for IMRT: 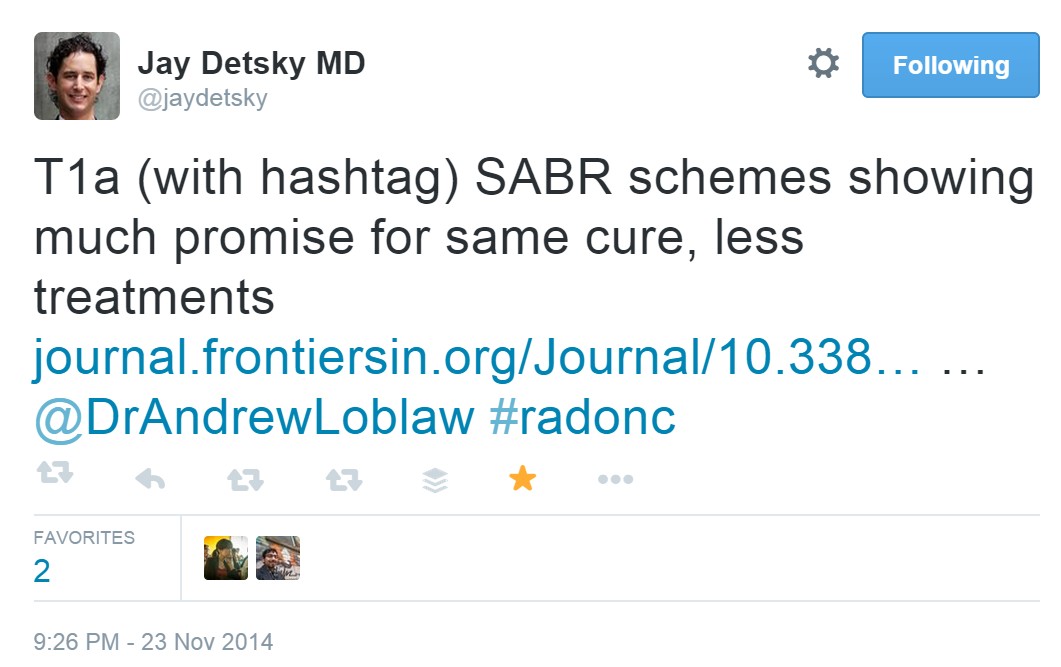 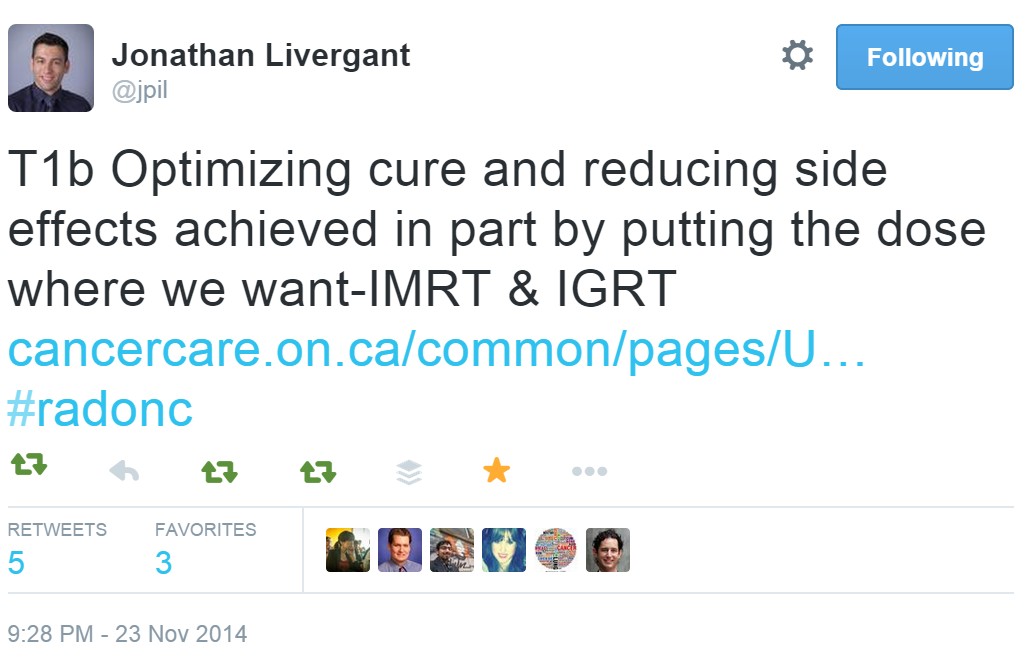 Practice patterns in patient assessment stressed the importance of a tobacco history. These encounters created an opportunity for cessation counselling as opposed to guiding treatment decisions while recognizing the threat of information overload. 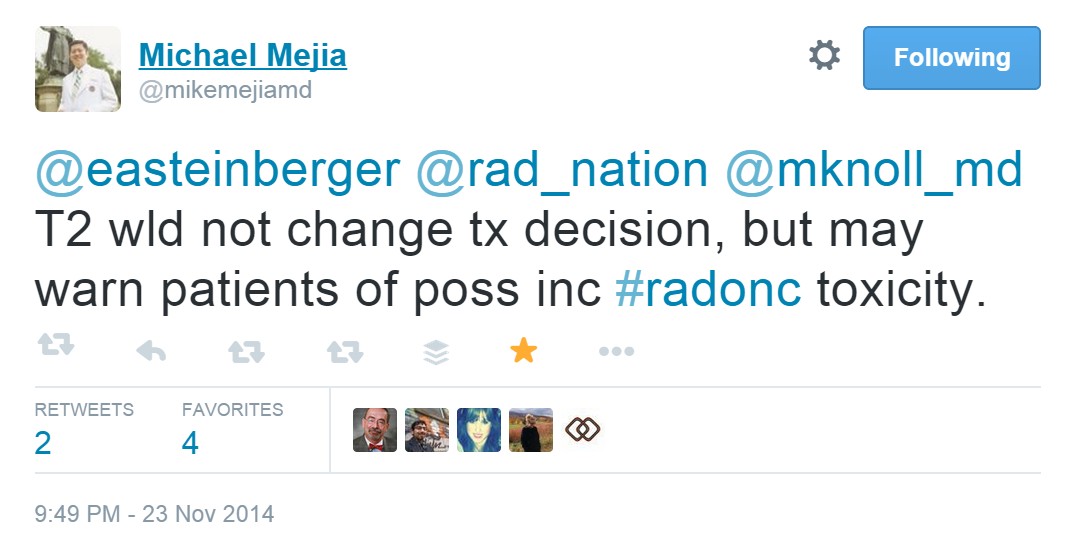 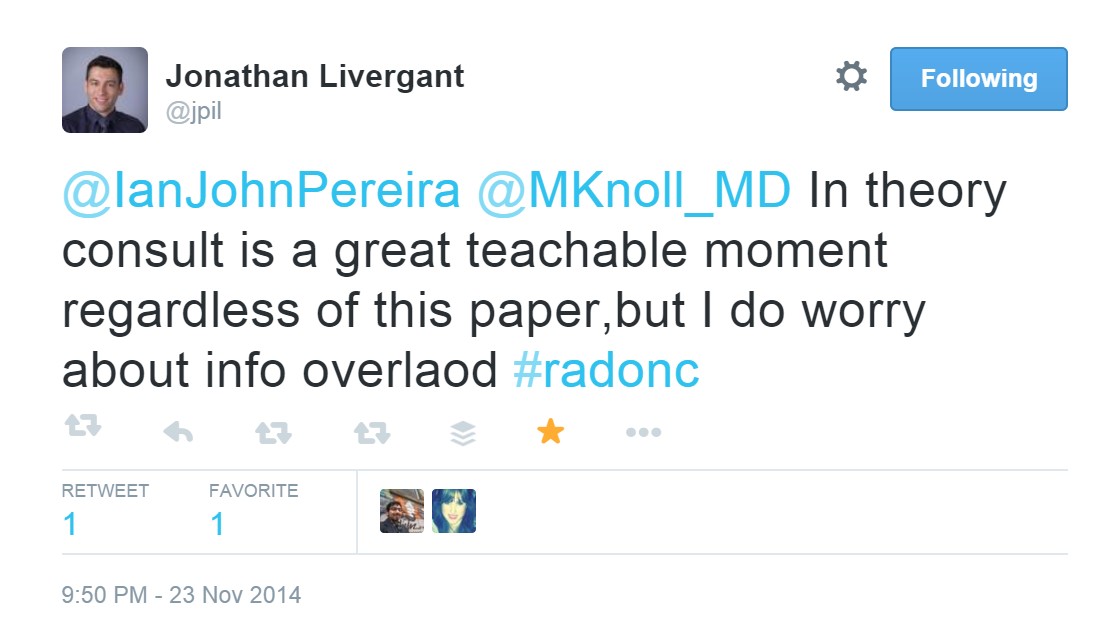 The conversation then moved to the study. Results showed current-smokers had a higher PSA relapse rate (HR 1.37 compared to former or non-smokers), more distant metastases (DM-free survival 72% vs. 87% in never-smokers), and higher cancer specific mortality (HR 2.25). There were a few surprises including finding no significant differences based on pack-years smoked and that only current as opposed to former smoking status mattered. 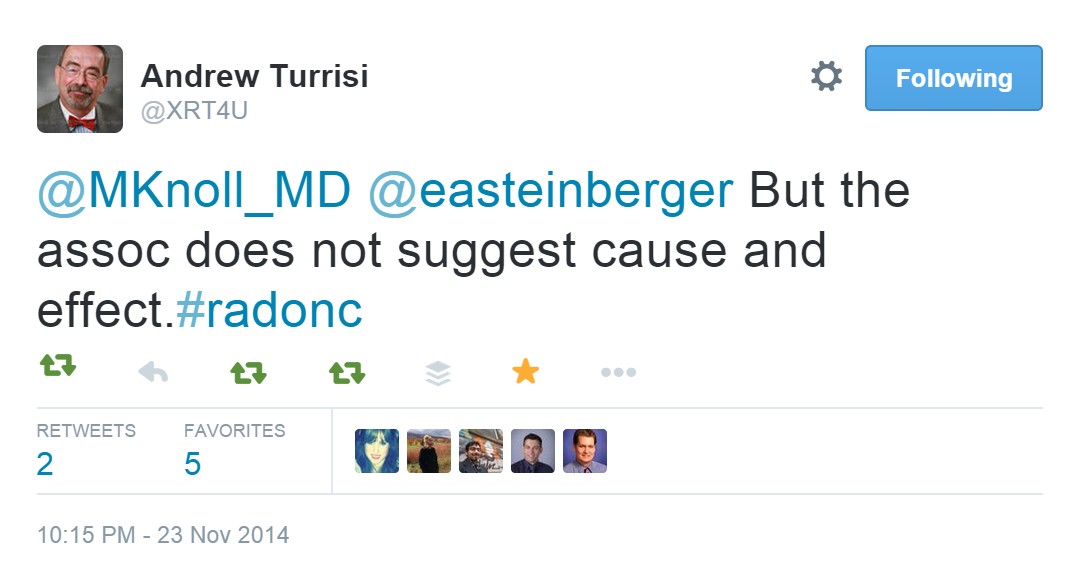 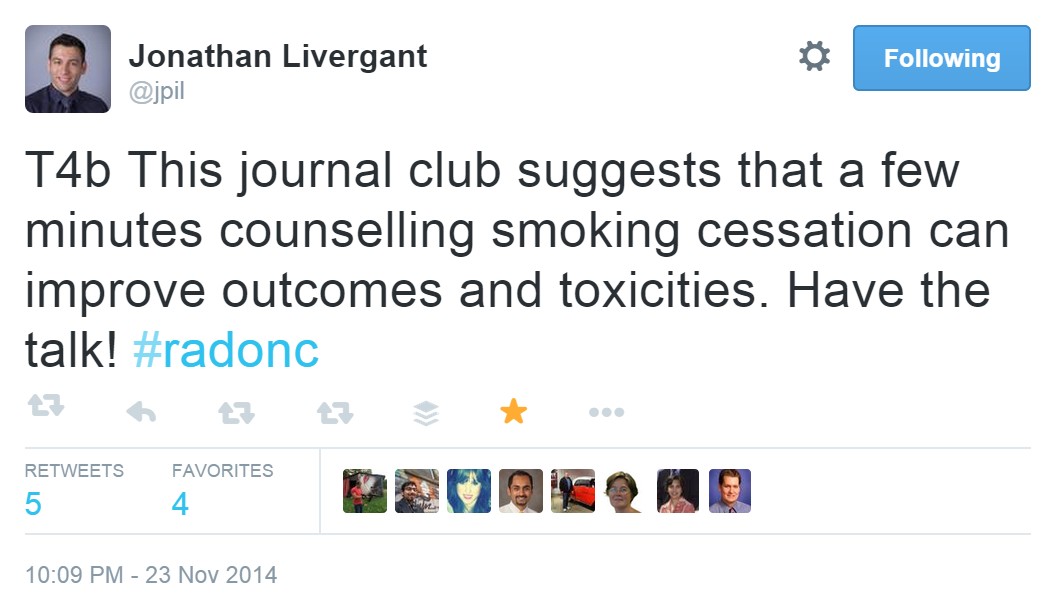 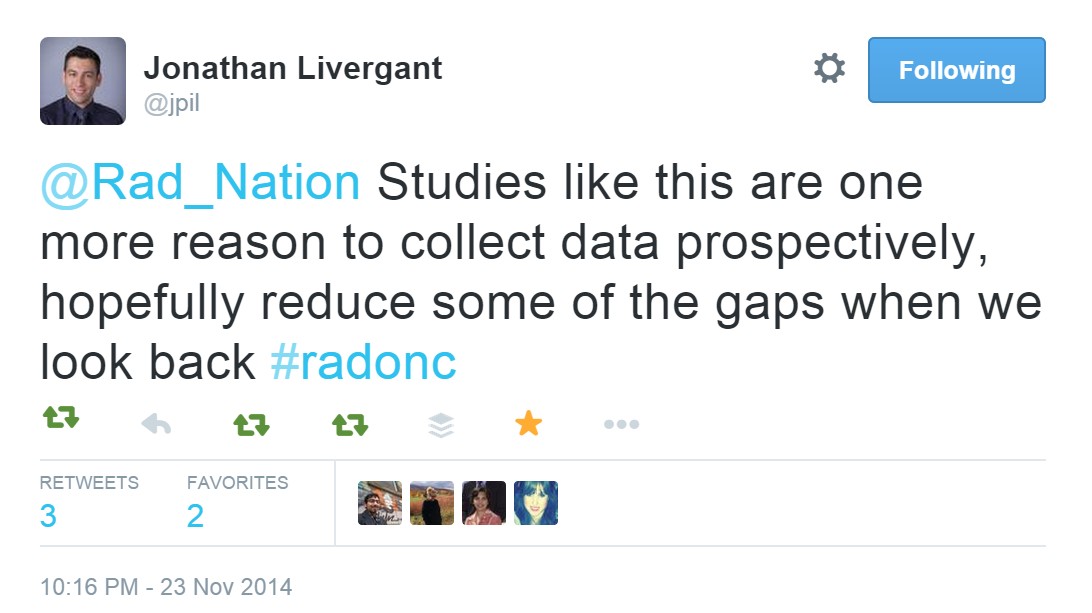 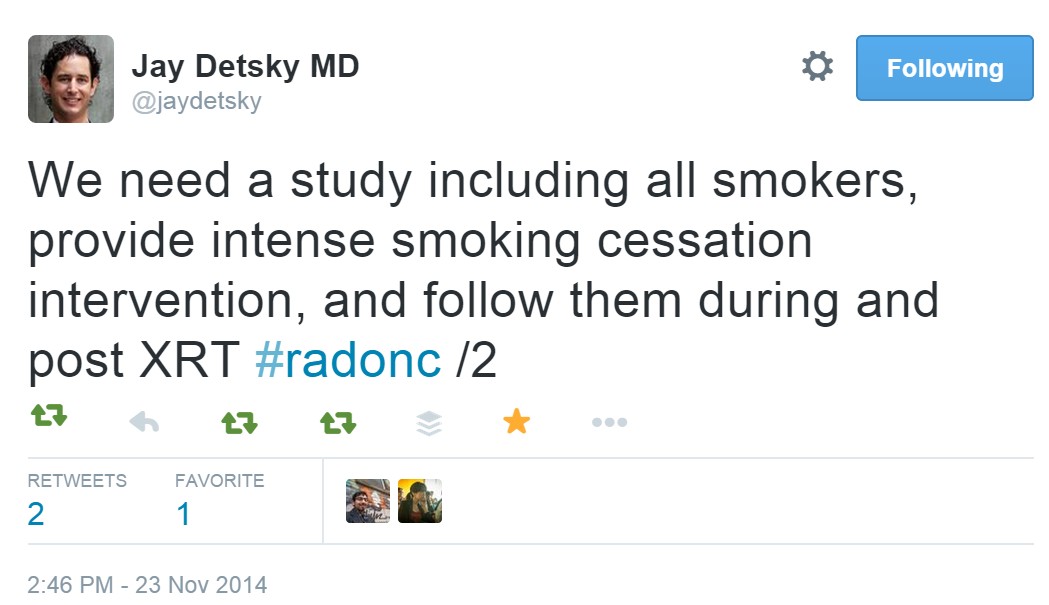 With a little #RadOnc humor in-between. 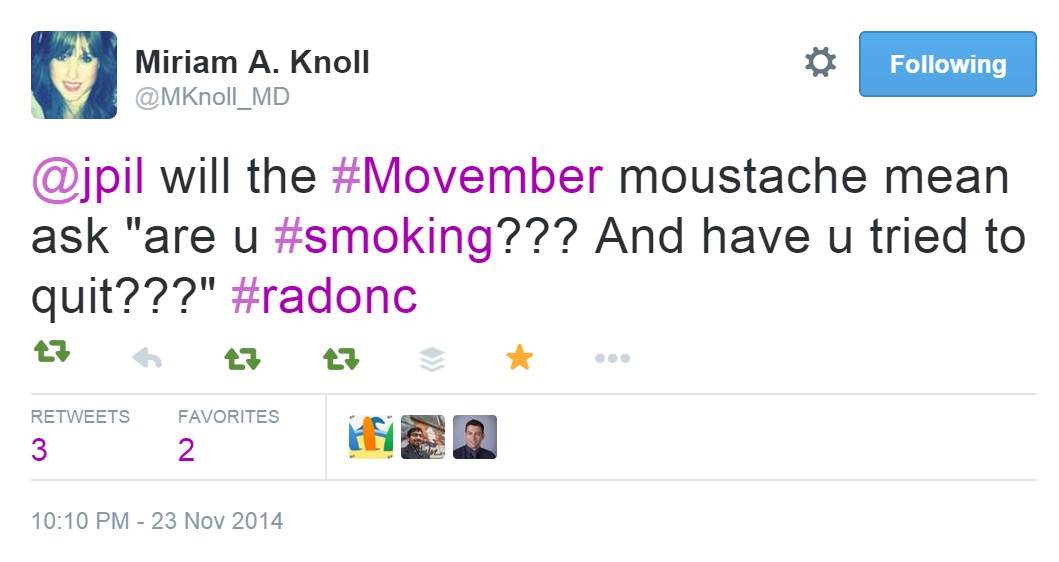 We recognize the quality contributions from all members of our community. For their leadership during this chat, congratulations to Dr. Jay Detsky (@JayDetsky) and Dr. Mohammad Alfayez (@alfayezmo) who received the Jerry Maguire Award for their evidence-based tweets. (“Show me the data!!!”) The Francis Peabody award went to Dr. Jonathan Livergant (@jpil) and Dr. Jarad Martin (@DocJarad) for the best clinical tweets. We will be looking forward to more lively conversations in the New Year!

The #RadOnc Journal Club was first proposed at the Yale Department of Therapeutic Radiology in April 2014 to leverage published evidence and stimulate discussion on key topics in radiation oncology. It became part of Radiation Nation – a community founded by Dr. Matthew Katz (@subatomicdoc) dedicated to improve cancer care through online collaborative conversations on education, medical practice, and quality and safety improvement for patients, caregivers, and medical professionals. Interest grew globally and in September, where we bridged cultural divides by encouraging conversations in multiple languages. Today, we routinely have participation from over 5 countries during the #RadOnc Journal Club and on Radiation Nation blog.

Ian Pereira is an R2 resident in Radiation Oncology at Queen’s University, Kingston, Canada. He believes that education is a basis for progress in health and care, and is interested in leveraging new technologies including social media in medical education.

A big thank you to all our 2014 reviewers

Into Africa: Engaging with urology in the developing world
Scroll to top