Persistent rain throughout this year’s 30th EAU Annual Congress failed to dampen the spirits of over 12,000 delegates who have enjoyed another fantastic congress here in Madrid. The EAU Scientific Committee, led by Arnulf Stenzl, deserve tremendous credit for the work they have done to construct an extremely comprehensive and stimulating programme once again this year. I do recall my last EAU Congress in Madrid 12 years ago and there is no doubt but that the standard of this meeting has risen exponentially during this time. It is not just be Annual Congress of course which has developed in this time; the EAU has seen enormous growth in its global influence through the meteoric rise of European Urology, the activities of the European School of Urology (even beyond Europe), the pre-eminence of the EAU Guidelines, and the introduction of new initiatives such as UroSource. The Annual Congress is the nidus for much of this activity and it has become an unmissable event for many of us (even when based in Australia as I am!).

Rebecca Tregunna and Matthew Bultitude have already covered some of the highlights of the opening days of this year’s Congress in their BJUI blog . I will give you some further highlights and point you towards the excellent congress website which has archived a huge amount of material to allow you to catch up on sessions you may have missed.

Big highlights for me on day 3 and 4 include the following (please forgive my oncology focus):

PSMA PET scanning – there was considerable interest in the early data on PSMA PET scanning for recurrent prostate cancer at last year’s EAU Congress, and this year has seen some very positive data being presented from Munich and Heidelberg and further enthusiasm for this imaging modality. Tobias Maurer (Munich) presented a number of papers showing the high sensitivity in particular for PSMA PET in detecting recurrent prostate cancer at low levels of biochemical recurrence using either PET CT or PET MRI (poster 928).

Many other plenary speakers also highlighted the positive data surrounding PSMA PET and also the possible theragnostic potential of this in the future (poster 675 and Dr Haberkorn plenary lecture). However in the scientific souvenir session which closed the meeting, Dr Peter Albers burst the bubble somewhat by warning that we need much better data (tissue validation in particular), before we all rush towards PSMA. He has a point of course, although I have been extremely impressed with our initial experience using PSMA PET in Melbourne over the past six months and I do expect it to live up to the hype.

CHAARTED data looking good – Nine months after he made world-wide headlines when he presented the overall survival data of the CHAARTED study at ASCO, Dr Chris Sweeney crossed the Atlantic to again present this data to a packed eUro auditorium. This randomised study of 790 men with metastatic prostate cancer, has demonstrated that men who receive six cycles of docetaxel chemotherapy upfront at the time of starting androgen deprivation therapy, have a considerable survival benefit compared to those who receive ADT on its own (the current standard of care). This was especially so for men with high volume metastases who had a 17 month survival benefit (HR 0.61).

Although the French GETUG study has not shown the same benefit, Sweeney and others have proposed rational explanations for why this might be so. While the final paper has not yet been published (will be submitted this week), very many of us have already embraced the CHAARTED as the new standard of care for men presenting with high-volume metastatic prostate cancer. A proper landmark study.

Metastatic castrate-resistant prostate cancer (mCRPC) – still more questions than answers. What an amazing few years for this disease area! Five years ago, urology trainees only had a handful of “essential reading” papers in the world’s top journal, the NEJM, that we could cite to support evidence-based practice. It is now difficult to keep up with all the landmark trials in NEJM and other top journals reporting overall survival advantage for a variety of agents targeting mCRPC. Enzalutamide has already joined the ranks of these blockbuster drugs and this year’s EAU saw more data illustrating the powerful activity of enzalutamide in the pre-chemo mCRPC space. In the Breaking News session on the final day, Dr Bertrand Tombal presented the final analysis of the PREVAIL study which confirmed the overall survival advantage of patients receiving enza pre-chemo when compared with placebo. The HR of 0.77 was strongly significant (p=0.0002) and the therapy was well tolerated. 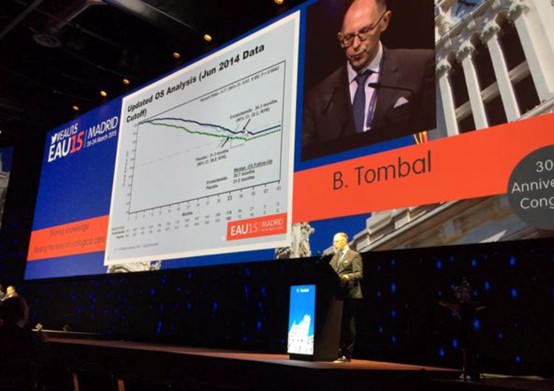 However as pointed out by discussant Dr Maria de Santis, we have still a way to go to figure out which patient will benefit from which therapy and when. The sequence and combination of therapies is still being worked out, and while the potential of predictive biomarkers such as AR7 is certainly exciting, we are still bereft of data and tools (and funding), to figure out the best pathways. 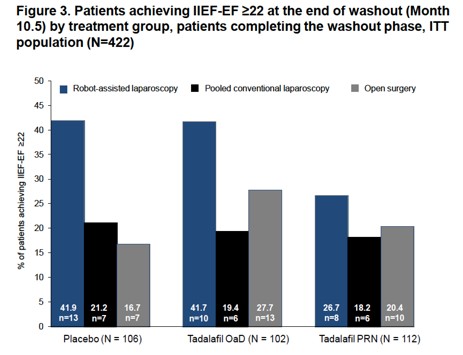 The same cannot yet be said of robotic cystectomy. Despite my own enthusiasm for and publications on robotic cystectomy, it is hard to get away from some of the cautionary language being expressed about the role of robotic cystectomy at the moment. An excellent plenary featuring giants in the field of bladder cancer (Dr’s Bochner, Wiklund, Studer, Palou), debated the issue in the main eUro auditorium and the following day’s newsletter summed it up nicely: 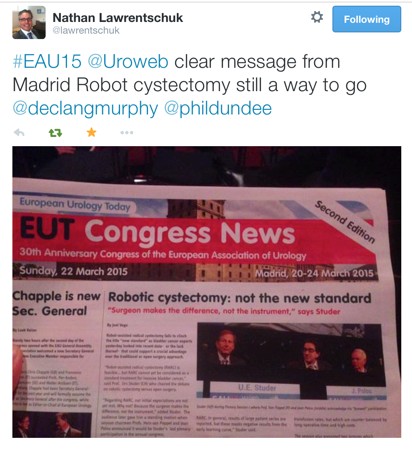 This provoked much discussion on Twitter with some prominent names chiming in from the US. Dr Khurshid Guru got involved to reassure us that the International Robotic Radical Cystectomy Consortium which he leads will provide the answer.

On a non-cancer note, it is clear that some of the most popular session and courses at EAU15 were focused on uro-lithiaisis. Stone surgeons are also very active on Twitter and although I did not attend any stone sessions, I was pleased to see that standardization of terminology is also important to the “pebble-ologists”:

Finally, #EAU15 was truly a social experience, not just in the wonderful bars and restaurants of Madrid, but also through Twitter and other social media channels, strongly supported by the excellent communications team at EAU. We recently published a paper in the BJUI documenting the growth of social media at major urology conferences and at EAU in particular. Between 2012 and 2014, the number of Twitter participants increased almost ten-fold, leading to an increase in the number of tweets from 347 to almost 6,000 At #EAU14, digital impressions reached 7.35 million with 5,903 tweets sent by 797 participants. 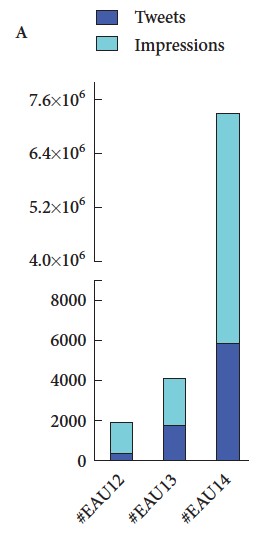 As might be expected, #EAU15 has continued this trajectory with almost 8000 tweets sent by 1220 participants. 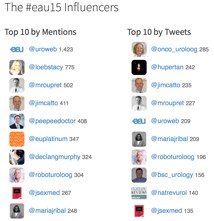 One of the only criticisms I have of EAU15 is that the scientific program is now so large that it is impossible to get to all the sessions I am interested in. There did seem to be a lot of prostate cancer running simultaneously but I am not sure how much the Scientific Committee can do to avoid such clashes. Thankfully, the EAU meeting website www.eaumadrid2015.org contains a huge amount of material including webcasts, interviews, posters etc which allows delegates and EAU members to catch up on some of the outstanding content.

Another big attraction of the EAU Annual Congress is of course that it takes place in Europe’s most wonderful cities. EAU16 heads to Munich – put the date in your diary 11-15 March 2016.

Are you travelling to Madrid for EAU? Poll Results