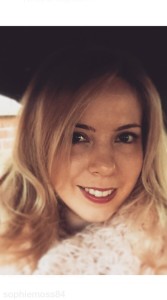 The 30th anniversary EAU congress is currently taking place in the beautiful but rainy city of Madrid with over 12,000 delegates attending. The opening Friday proved a monumental day with the start of the congress as well as personally as I gave into the pressure of social media, and joined Twitter. This is being heavily promoted by the EAU this year and with multiple engaging sessions going on at the same time this seemed to be the best way to have my cake and eat it and enjoy highlights from different parts of the meeting.

The second ESO prostate cancer observatory was well attended and led to interesting debates about PSA screening and informed consent due to risks of over-detection and subsequent overtreatment of indolent disease. Indeed Andrew Vickers also highlighted that the results of the much anticipated ProtecT trial should be interpreted with caution given the high number of Gleason 6 patients that have been randomised.

In the evening the opening ceremony took place with an emotional final introduction to the congress by Per Anders Abrahamsson as he steps down and hands over to Chris Chapple as EAU Secretary General (photo courtesy @uroweb). 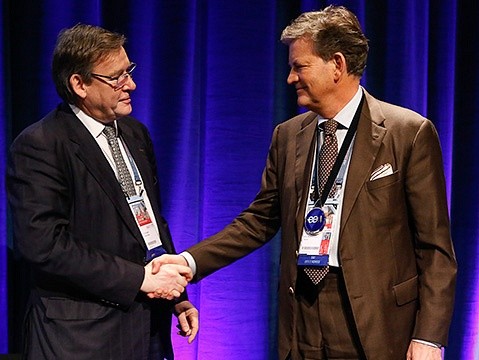 The EAU also gave out a number of awards including the Crystal Matula award for promising young urologist which was given to Morgan Roupret.

The scientific programme on Saturday started with the main plenary session on controversies in bladder and kidney cancer. It is difficult to draw conclusions regarding lymphadenectomy in upper tract tumours due to a lack of randomised data but certainly based on retrospective data a benefit is seen both in terms of staging and cancer specific survival. A hot topic lecture on molecular profiling in bladder cancer gave a thrilling insight into how agents will be able to target pathways based on specific mutations and Professor Studer, in his last ever plenary session, led to an interesting debate on robotic vs. open radical cystectomy. This has caused much controversy recently with the Bochner randomised controlled trial and this debate will surely run and run. Maybe most importantly, as Studer concluded “The surgeon makes the difference not the instrument”. This was highlighted on the front cover of the congress news with a more downbeat headline on robotic cystectomy. 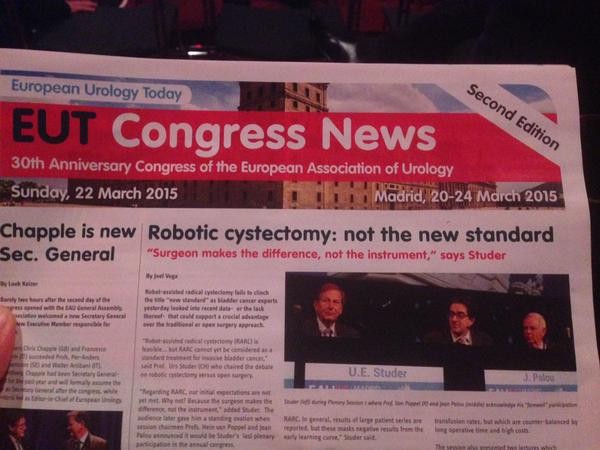 Next came an intriguingly titled talk “What would Charles Darwin make of renal cell carcinoma?” with discussion about the heterogeneity of renal tumours making it difficult to identify specific targeted treatments based on renal biopsy alone.
Multiple section meetings then ensued. From the EAU section of urolithiasis (EULIS) meeting it seems that PCNLs are increasingly being miniaturised with development to mini, ultra-mini and micro procedures. The issues behind “diabesity” and stones were discussed with Professor Reis Santos predicting an epidemic of stones either due to uric acid stone formation from obesity or calcium oxalate formation from malabsorbative bariatric procedures. There was also a recurring theme with poster and podium sessions on “ESWL – is there still a role?” While the argument is made for ESWL there is no doubt that worldwide treatment rates for ESWL are falling.
As the EAU Section of Female and Functional Urology there was an excellent series of talks on mesh and mesh complications. There was a fantastic review of dealing with these complications through a variety of approaches and techniques and whether all these should all be dealt with in high volume centres. Unfortunately, no one knows what high volume means for this. Interestingly the terminology is changing, moving away from ‘erosion’ to ‘exposure’ and ‘perforation’. Removing the mesh only relieves associated pain in 50% of cases and these dedicated centres need to offer multimodality treatments to deal with pain and ongoing continence issues.
In the parallel EAU section meeting of Genito-urinary Reconstructive Surgeons, Professor Mundy gave a personal 30 year series of 169 patients treated with both clam cystoplasty and artificial sphincter. The majority of complications were related to the sphincter. The largest subgroup was patients with Spina Bifida but were the patients with the best outcomes.
David Ralph in the EAU Section of Andrology stated that shunts were ineffective after 48 hours after priapism and that a prosthesis instead should be inserted to prevent corporal fibrosis.
The EAU section of Oncological Urology also heard that 68Ga-S+PSMA-PET improves detection of metastatic lymph nodes in prostate cancer and can be used intra-operatively in radioguided surgery for targeted lymph node dissection.
Overall the organisers have done a fantastic job with a well organised meeting and a great venue despite the disappointing weather. There were sessions that people could not get in to as the rooms were full. 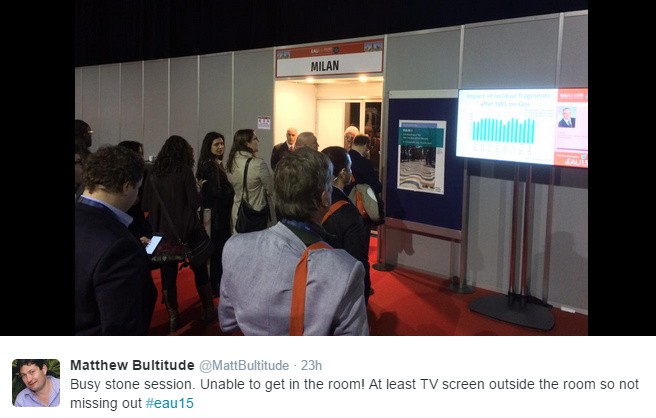 However, with live TV screens outside those rooms and transmission to an adjacent overflow room this didn’t seem to matter too much. Much to look forward to for the rest of the conference #EAU15.