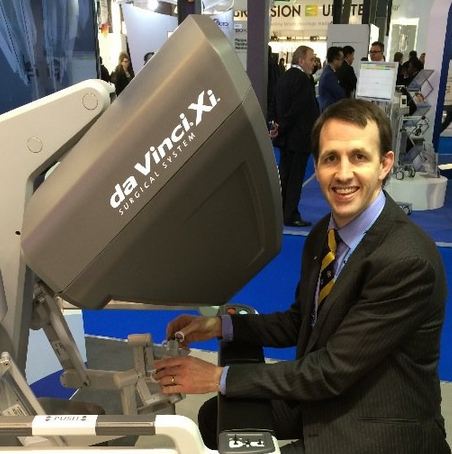 The 2016 AUA returned to the beautiful city of San Diego set on the shores of the Pacific in an excellent conference centre located in the centre of the town adjacent to the Gaslamp district. For a change the wifi was excellent and allowed enhanced levels of social media interaction and urological discussion. Opening these interactions were 2 key sessions which provoked much debate. Firstly the announcement that after over 10 years of trying the FDA has approved HIFU treatment although it seemed to get there through a slightly “de novo” pathway. Apparently the FDA approved it as an ablation tools but not for prostate cancer. 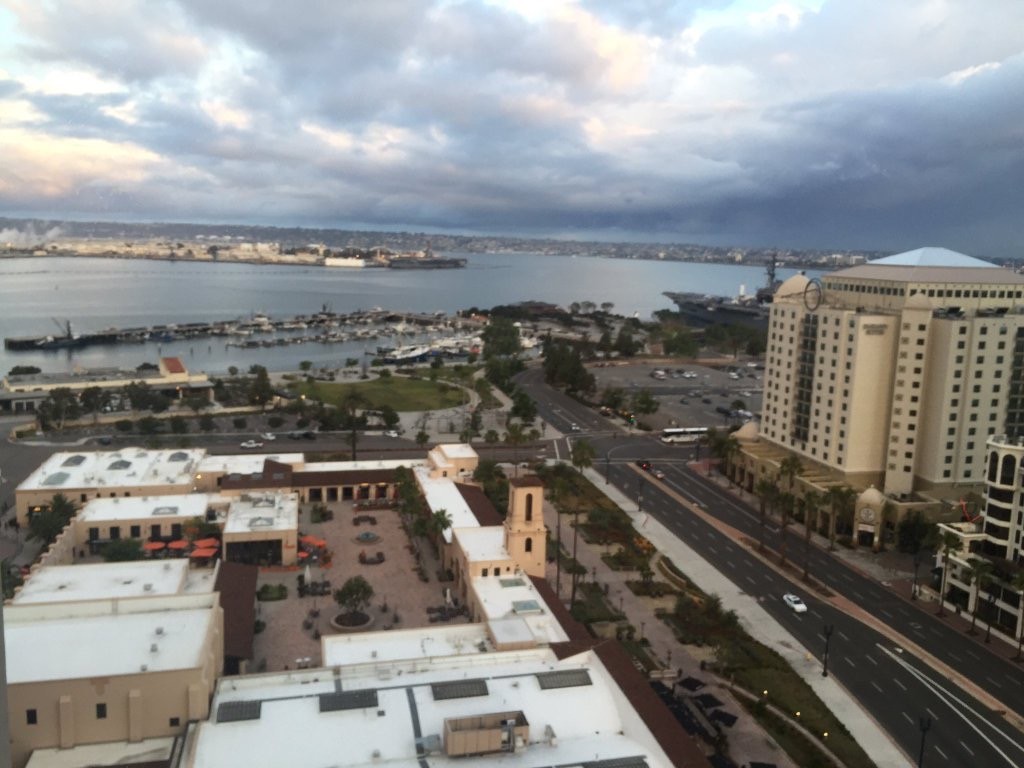 Although not directly approved for use in prostate cancer, that is exactly what it is going to be used for. A packed house saw a debate with evidence from both sides. Dr Nathan Lawrentschuk promoted the 4 Ds of HIFU. His key point was that 56/101 had a post treatment biopsy of which 51 where biopsy positive! 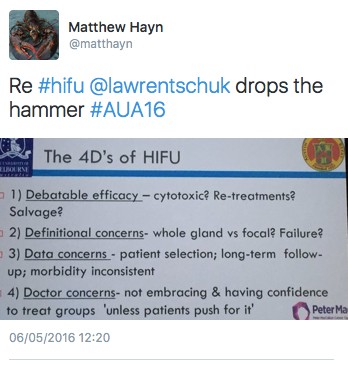 The second big session focussed on the AUA/SAR consensus statement  document on prostate cancer diagnostics. This recommended a “High Quality” MRI should be strongly considered if patient has a rising PSA with a previous negative biopsy, has persistent clinical suspicion for prostate cancer or is undergoing a repeat biopsy. There was no mention of MRI for all at the pre-biopsy stage which many had hoped for and only 2 lines on trans-perineal biopsy as an option. This is of course related to health resources and the outpatient office-based nature of most USA urologists. 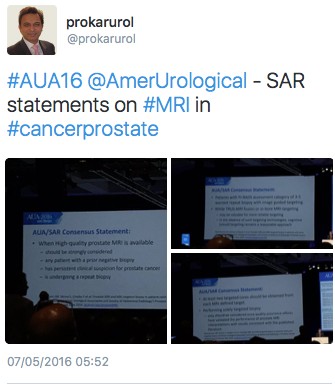 A welcome innovation was the Crossfire Sessions which pitted 2 well known advocates of one treatment against 2 with the opposite views. It was hardly debating of the Oxbridge variety but none the less did provoke some useful discussions. Topics included radical prostatectomy vs radiotherapy, endoscopic vs nephro-ureterectomy management of upper tract TCC, and enucleation at partial nephrectomy vs formal resection. Standing room only at the back of the halls but no real audience interaction or voting which was a shame. 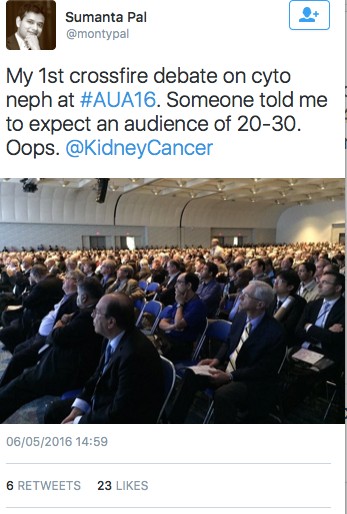 The session which really woke everyone up was Rene Sotalo’s wonderful complication horror show. Bleeding, bleeding and more bleeding in a variety of ways. How would you handle this he asked? Pray I thought! But this and similar sessions clearly show the benefits of recording all cases and reviewing these DVDs if something goes wrong. The cause of some complications were only identified by review of the intra-operative tapes. Some clinical titbits learn’t included  using only a horizontal incision for the camera port at RARP to reduce hernias and turning off pneumocompression stockings if there is a major venous injury to prevent excessive venous bleeding. 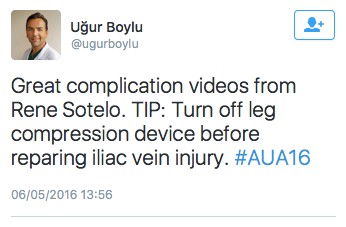 From a SoME perspective there was both good and bad. One poster showed that 40% of graduating US residents had publicly accessible unprofessional content on social media. Food for thought at the consultant interview no doubt, but on the other side SoMe ranks third in the acquisition of urological knowledge (and climbing…). One hack produced this tweeting guideline for all to reflect on. 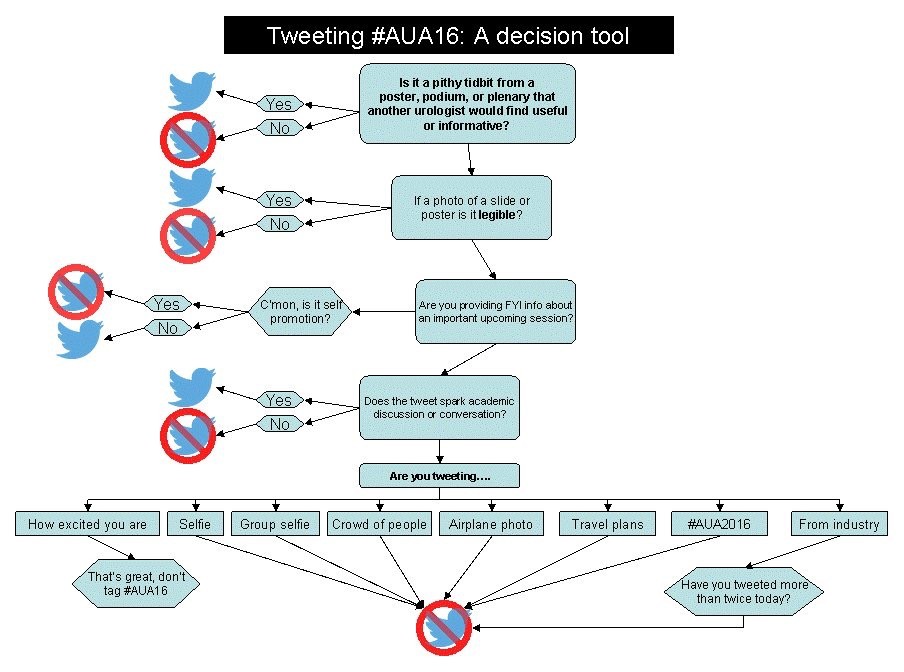 Prof Prokar Dasgupta had the honour of presenting the widely anticipated session on emerging robotic technology . At last there appears to be some real competition to Intuitive’s dominance on the way. There are at least 3 credible robotic systems on the way. He finished with an intriguing slide on Dr Google being the most powerful doctor in the world! 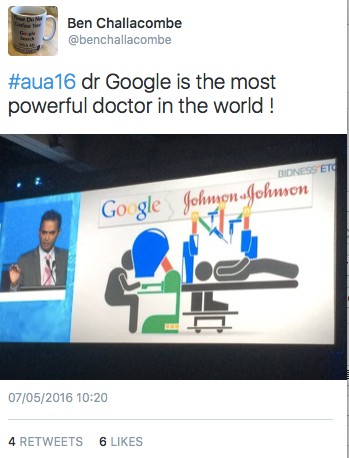 Despite Europe and Asia moving towards the use of PMSA PET , the USA is not moving in this direction due to reimbursement issues if the PMSA molecule. 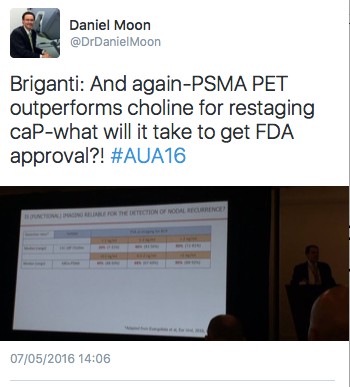 There was a lot of interest in a packed auditorium to see live surgery for a single use disposable fURS “Lithovue” with some reporting superior vision , optics and deflection. 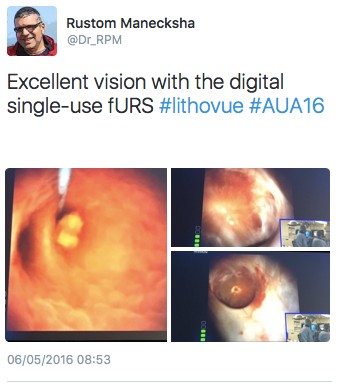 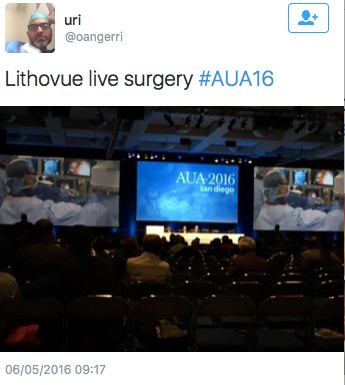 There were some sceptics amongst the stone community with the environmental impact and cost effectiveness a concern. 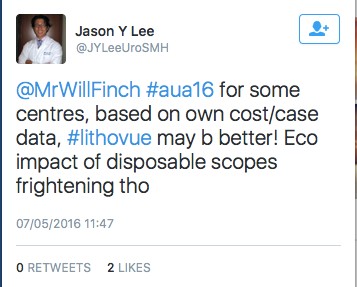 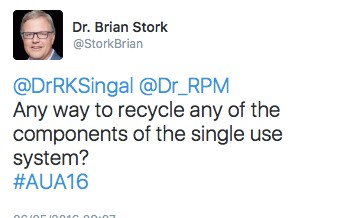 With the popular Gaslamp district a stones throw away many delegates went after the conference for a meal and drinks. The local baseball team San Diego Padres was a popular destination with may watching baseball for the 1st time whist others had gone for a run along the harbour and even caught a sighting of some seals! 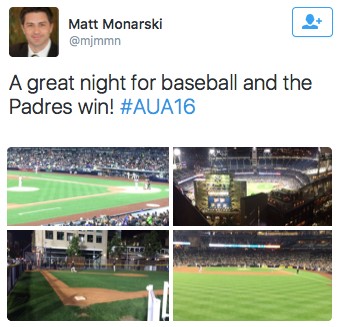 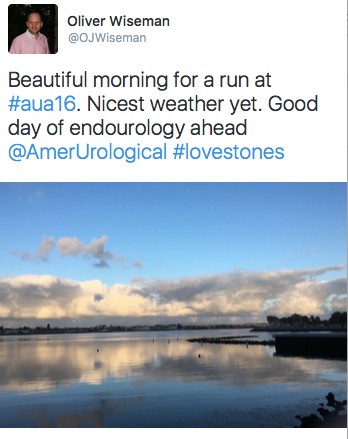 RE: Opportunity of widening the resort to multiparametric MRI/transrectal ultrasound...