Blog - Latest News
You are here: Home1 / BJUI Blog2 / In search of the ROSETTA stone (again)?

We are having an amazing year of scientific discovery in our specialty. 2016 has already seen the results of the only randomised trial comparing open versus robotic radical prostatectomy from Australia and the ProtecT trial from UK discussed intensively on [email protected] The PROMIS of MRI is expected to change the practice of prostate biopsies in response to a raised PSA. The teams completing these trials deserve our heartiest congratulations as it is well known how difficult randomised trials in surgery are to initiate and complete.

As if this was not enough, this month the randomised controlled trial comparing Botox (Onabotulinum toxin A) to Interstim (sacral neuromodulation) in patients with refractory overactive bladder has been reported in JAMA. It is otherwise known as the ROSETTA study (Refractory Overactive Bladder:  Sacral NEuromodulation v. BoTulinum Toxin Assessment).

This is an example of what collaboration between individuals and teams within a pelvic floor group can achieve. Cindy Amundsen, the lead author, presented the trial results at the #AUA16 late breaking abstract session in San Diego.

The CONSORT diagram is shown here 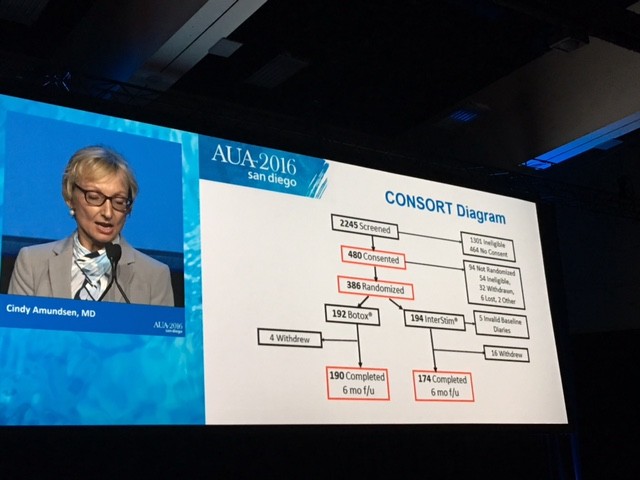 The primary outcome measure showing Botox winning over Interstim (narrowly) in reducing urgency urinary incontinence is demonstrated in this diagram. 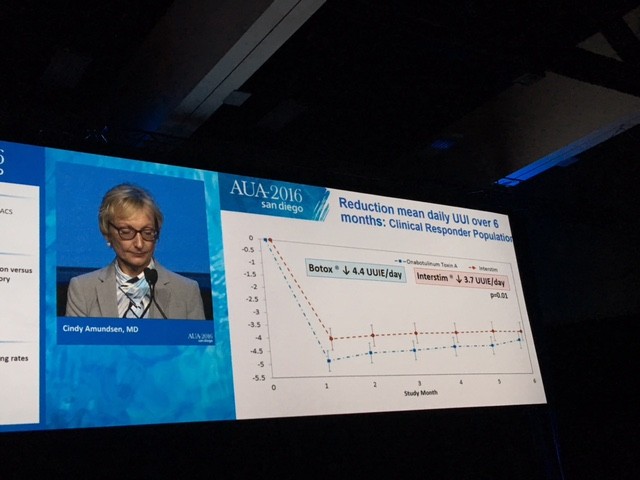 The summary results are shown here 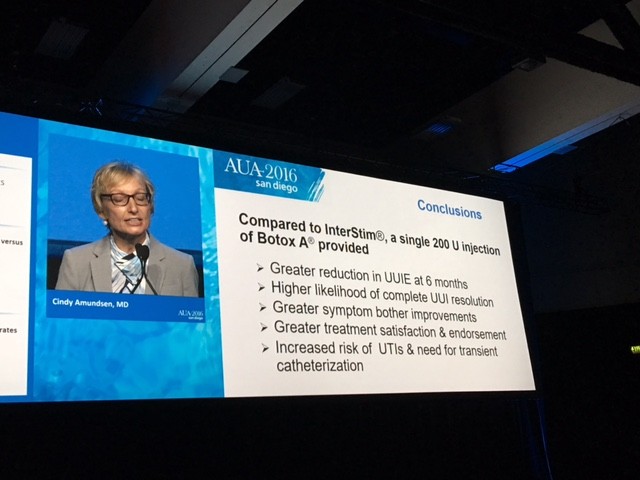 So what would you do for your patient with refractory overactive bladder who has failed Anticholinergics and Mirabegron?

I have spent the last week thinking about the trial results carefully and was asked exactly this question at the International Endourology Forum in China. There are a number of important aspects to consider. The dose of Botox used in the trial was 200 units while the licensed dose is 100 units for overactive bladder of non-neurogenic origin. We know that one size does not fit all and indeed some patients failing 100 units need higher doses of Botox. It remains unknown as to what would have happened if 100 units of Botox was compared to Interstim as the authors are quite guarded about their own conclusions about the benefits.

The side effects also need to be carefully discussed with the patient. The UTI rate in the Botox group is about three times that of the Interstim group. Most patients may accept a period of oral antibiotics to counter this. The risk of CISC dropped from 8% at 1 month to 2% at 6 months in the Botox group. This is lower than previously reported in Phase lll studies. The need for revision or removal in the Interstim patients was around 3% – small but not to be ignored.

Punchline
If I was the patient in question, I would have Botox initially, preserving Interstim for later. It is less invasive and can be repeated roughly once a year if needed. Call me “lilly livered” but I do not like the idea of having a little box, however tiny, inside my bum and occasionally having to sit on it! I look forward to the smarter new generation of minimally invasive or even non-invasive nerve stimulators. But then it would need another randomised trial, many years of unanswered questions, perhaps even wastage of a lot of grant money…………..yawn!!

In the meantime, I will take my chances with Botox and counsel my patients accordingly. Unlike the famous ROSETTA stone, the key to understanding the mystery behind hieroglyphs and the controversy as to whether it should at all be in the British museum, I fail to see any such controversy with this nice trial in JAMA.

My thoughts and message are clear. Are yours?

November’s BJUI – About the Cover
Scroll to top