Blog - Latest News
You are here: Home1 / BJUI Blog2 / Movember and the Importance of Patient Advocacy 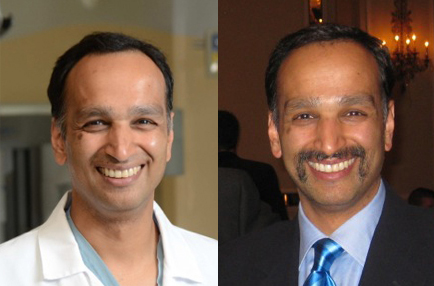 In October 2009 the resident on my service was Dr Dean Elterman. I have had many residents and fellows over the years and have always felt that as much as they hopefully learn something from me I probably learn more from my time with them. The concept of ‘drilling down’ to make lasting connections with leaders of the next generation is not something that is always intuitively grasped in the hierarchy of surgical life. As it was, in late October of that year Dean mentioned Movember to me and asked whether I would like to participate. At that point, not knowing what he was talking about I proceeded to tell him to consult his spell-check. Having once before sported facial hair in my early 20s to very little acclaim I had not entertained the thought since. My immediate reaction was dismissive. Nevertheless after some further discussion it became obvious to me that the whole concept of Movember is not simply to raise money for men’s health and prostate cancer research but to generally shine a brighter light on the nature of the disease, the work we do as urologists and to start a dialogue. This grassroots movement, started in 2003 in Australia by Adam Garrone has quickly grown into a worldwide phenomenon. That fall I anchored Dean’s team of residents and we broke into the top 20 of small teams worldwide.

Last year I set up a local team at Toronto East General Hospital with tremendous success. On an individual level I raised $46,000 in support of men’s health, the seventh highest individual total worldwide. While that certainly was nice, as the month wore on what became increasingly clear to me was the larger role that my involvement in Movember had created in engaging patients, other healthcare providers and society at large. The quirky nature of the campaign lends itself to a fun, easy discussion about an important topic. Having a dialogue around prostate cancer including how to screen as well as when and when not to treat is very important. The significant emotional and physical consequences of treatment deserve attention. A particularly great example by the terrific @docmikeevans illustrates the space that Movember now inhabits. The role that urologists in particular have as advocates of men’s’ health is very clear.

It is with this last thought in mind that I call upon my colleagues in Canada and around the world to take up the charge. In recent years, much of the progress that we have made in treating prostate cancer is at risk of being undermined. The confusing and rather opaque nature of screening guidelines have increasingly promoted prostate cancer as an indolent disease not worth having a discussion about. I certainly have previously written about this and recently a group of experts met in Melbourne and attempted to better make sense of screening and stratify risk. Prostate Cancer Canada, an important advocacy group in Canada has also done a great job this fall with their #knowyournumber campaign. I was proud to be a part of it. Their CEO Rocco Rossi has embarked upon a terrific campaign of support by walking the Camino to Santiago de Compostella this month. All leaders must actively embrace the role of advocacy for our patients. Movember to me is a great vehicle for this. Will you look silly and unprofessional in the clinic during Movember? Absolutely not. In reality, every patient in the clinic is immediately reassured that their urologist walks along beside them, although perhaps not as far as Rocco.

It is in this context that I would call on all of my urological colleagues to stop shaving in Movember, start a team, create a network and share this experience with our brave patients and their partners for a month. The amount raised is really secondary. Having that visible presence is crucial. With epidemiologists, policy makers and many others expressing expert opinions about a disease that we treat every day don’t you think we should also embrace that role? Movember is the forum where the most important group, our patients, will be having that conversation for a month. Join them. Simply caring for them after diagnosis or waiting for a research grant to materialize is not good enough. My female colleagues can join as ‘mo-sistas’. You can certainly follow my ‘progress’ and support my venture as well. I look forward to seeing my colleagues from around the world and the self-described #urotwitterati that contributes regularly on #urojc in particular to join in the fun. I expect to be pushed on the leaderboard.

Movember: The power of the Mo!
Scroll to top