Out with the old; In with the new. Stats and metrics: The BJUI website 2013

Is it already over twelve months since the new Editor took over and the new BJUI web journal was launched? The old one had served its purpose well but the editorial board had decided the change of leadership dictated a clean new website would be launched in January 2013. Decisions were hard. Out went non-journal content such as case reports and in its place we created four main content areas with the aim of maintaining fresh, regularly changing content. These (article of the week; BJUI blogs; picture quiz of the week; BJUI poll) you will by now be familiar with, but how has the new web journal performed? Let’s look at the metrics over the last year. 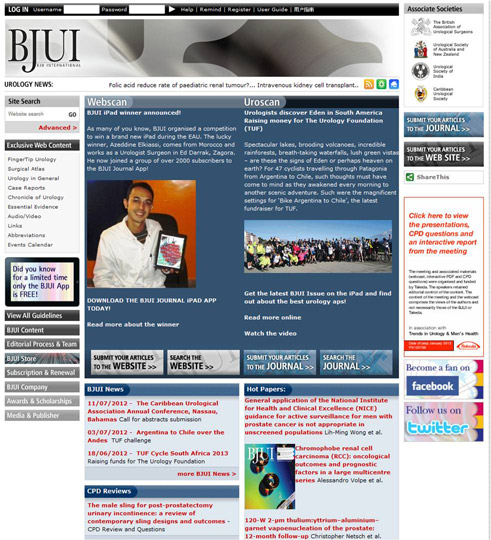 Firstly, most of the figures referred to in this article are for the www.bjui.org site only. They do not include direct access to the journal articles in the Wiley Online Library where the issues are stored. Thus analysing overall visitor numbers is not that valid and doesn’t allow for meaningful comparison. However, it appears there has been an increase in web visits of at least 10%. When we drill deeper, this is where we really notice a change. Readers now spend on average over 3 minutes on the site per visit. This is a dramatic change from previously – in 2012 the mean visit duration was just 87 seconds!

Geographically, the top country by visit is the United States with 22% of all visits, closely followed with the UK (21.6%) with Australia third. In total there were visits from 189 countries with both India and Japan making the top 10 (numbers of visitors) emphasising the journal’s global reach. This is truly an international journal. 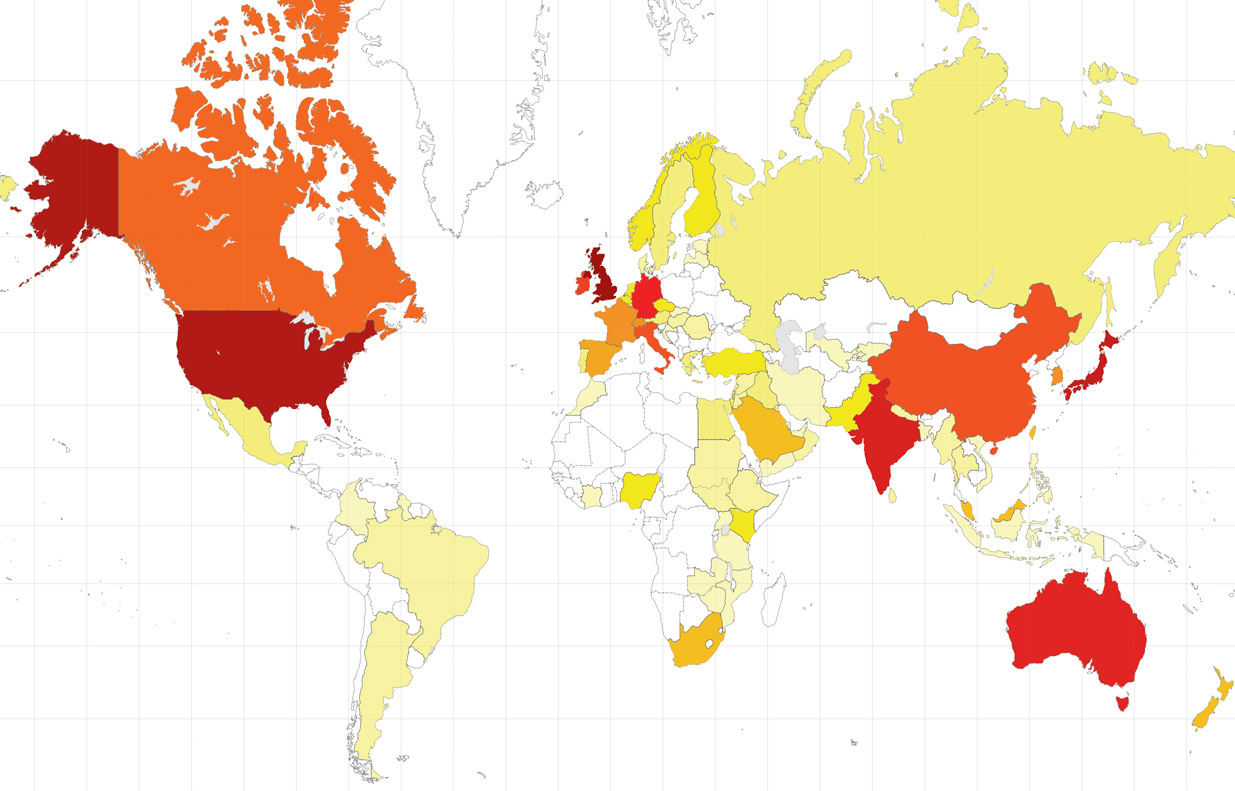 Global subscriptions to BJUI represented as a “heat map”

Another major difference we have noticed is in bounce rate. This refers to the percentage of people who leave immediately after visiting the page they landed on i.e. if everyone only looks at the first page they come to then the bounce rate would be 100%. In 2012 the bounce rate was 66% – and this has improved significantly to 50% in 2013. This rate is never going to be very low – people come directly to a blog, quiz or just go straight onto the author guidelines or an article on Wiley Online Library. But to see such a reduction is encouraging and vindicates the approach we have taken with the web.

When we look at traffic sources, again we see another big change. This is how the visitor came to the site i.e. do they type in the web address, use a search engine or get driven to the site by social media. As you might expect, the largest single source of traffic (45%) is from Google – these visitors also spend over 3 minutes on the site with a bounce rate of 40% – so the site is not being found by accident and readers move onto other pages. 24% of traffic is direct but what is new behaviour is that 12% is from Twitter and 6% from Facebook – so social media is now driving nearly 20% of all website traffic. Facebook visitors also spend over 4 minutes on the site – they come for a reason! Of course there are the quirks – a men’s health magazine drove 1% of visits to a specific article on penis extenders! Those readers aren’t urologists as they only spend 16 seconds on the site with a bounce rate of 99.4% – this, however, does give credibility to the use of these statistics.

Apart from the homepage, the majority of social media-driven traffic is to the blogs. This has been highly successful with regular topical blogs and comments. Blog traffic has been high with the most popular (Melbourne Consensus Statement) receiving over 6500 views and 58 comments. Whilst this is clearly the highest, the top 8 blogs all have over 1000 views. Time spent on these blogs is high with several being read for an average of over 6 minutes. In January 2014 we added widgets to our blogs that allow you to see the number of reads each blog has received, and also  to allow tweeting and Facebook liking directly from the blog. Blogs posted prior to this time also have these features but the number of reads prior to January 2014 are not displayed. With this section being so popular are Letters to the Editor dead?

In a recent poll, we asked you what single feature you had liked best. Exactly equal with 34% were the blogs and the free Articles of the Week (which have also been popular in the web metrics with over 13,000 views). Picture quizzes have been successful with over 10,000 views. These demonstrate a shorter time on the page as one would expect (100 secs) but also a lower bounce rate (48%) – these readers often go elsewhere on the site. The video section has also been popular with over 2000 views although obtaining good quality videos is challenging and we encourage authors to submit video with their articles to further drive this section. 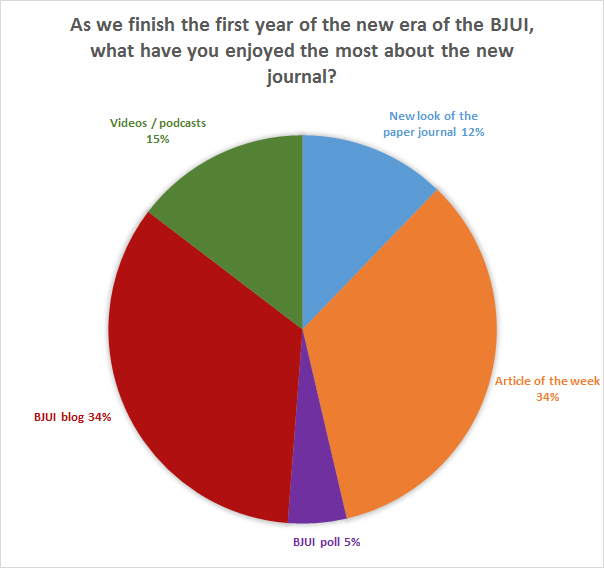 How does this translate to actual journal article downloads? Interestingly our approach has led to an increase of over 35% in full text downloads from Wiley Online Library compared with 2012. This is exciting and shows the web journal has been very successful not only in driving website activity as described above but also in promoting core journal content.

So for 2014 we have a new App to view the journal. Currently only on the Apple platform (80% of mobile devices used in 2013 to view the website were Apple), this is free to download although requires a log-in to view full content (available via your institutional subscription, from Wiley or from your society). It works really well on the iPhone as well as the iPad and allows access to not only the monthly journal but ‘Early View’ articles as well. This is already my preferred method for reading the journal and I highly recommend trying it.

With high-quality web and mobile interfaces, the question has to be are we ready to go paperless? As the Web Editor I should of course say yes. We discussed this at length at our first board meeting in November 2012. Due to our diverse international readership it was felt to be too early for such innovation. This will inevitably happen and another major urology journal has taken this step in 2014 (€60 supplement for the print version of European Urology). It is surely only a matter of time until digital is the standard platform. Hopefully you, the readers, will tell us when the time is right.