What a fun destination we had for the 3rd Annual BJUI Awards! As you may know, we alternate the occasion of these awards between the annual congresses of the American Urological Association (AUA) and of the European Association of Urology (EAU). Our first awards ceremony took place at the AUA in San Diego in 2013, followed last year in Stockholm at the EAU. This year, we descended on New Orleans, Louisiana to join the 16,000 or so other delegates attending the AUA Annual Meeting and to enjoy all that the “Big Easy” had to offer. What a fun city; a true melting pot of food, music and culture all borne out of the eclectic French, American and African cultures on show. I think I met more key opinion leaders in the clubs on Frenchman Street than I did in some of the prostate cancer poster sessions!

You can read more about all that in our #AUA15 Conference Highlights blog, so on now to the Awards. The AUA Annual Meeting plays host to intense social media activity and it is fitting that the BJUI Social Media Awards gets to acknowledge the rapidly growing number of Uro-Twitterati in attendance. Over 100 of the most prominent tweeters turned up to the Ritz-Carlton to enjoy the hospitality of the BJUI and to hear who would be recognised in the 2015 BJUI Social Media Awards. Individuals and organisations were recognised across 16 categories including the top gong, The BJUI Social Media Award 2015, awarded to an individual, organization or innovation who has made an outstanding contribution to social media in urology in the preceding year. The 2013 Award was won by the outstanding Urology Match portal, followed in 2014 by Dr Stacy Loeb for her outstanding contributions.  This year our Awards Committee consisted of members of the BJUI Editorial Board (Declan Murphy, Prokar Dasgupta, Matt Bultitude as well as BJUI Managing Editor Scott Millar whose team in London drive the content across our social platforms). 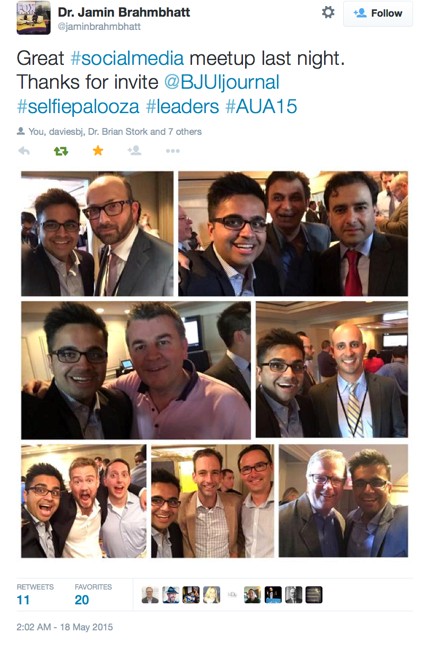 The full list of awardees, along with some examples of “best practice” in the urology social media sphere can be found on this Prezi. The winners are also listed here:

Most of the Award winners were present to collect their awards themselves, including the omnipresent Dr Henry Woo who received our top gong for his work on the very successful International Urology Journal Club #urojc. The #urojc now has over 3000 followers and its monthly, asynchronous 48hr global journal club has become a huge event. Many other specialties and #FOAMed resources have recognised #urojc and BJUI are delighted to publish a blog summarising each month’s discussions. Well done to Henry, Mike Leveridge and others in setting and maintaining this outstanding example of social media adding real value.

A special thanks to our outstanding BJUI team at BJUI in London, Scott Millar and Max Cobb, who manage our social media and website activity as well as the day-to-day running of our busy journal.

See you all in Munich for #EAU16 where we will present the 4th BJUI Social Media Awards ceremony!

Article of the Week: Evaluating the proportion of tadalafil-treated patients...

#AUA15 bursts to life in New Orleans
Scroll to top