The AUA meeting was starting to hot up with the anticipation of the Crossfire sessions, PSA screening and the MET debate that appeared to rumble on.  We attended the MUSIC (Michigan Urological Surgery Improvement Collaborative) session. It is a fantastic physician led program including >200 urologists, which aims to improve the quality of care for men with urological diseases. It is a forum for urologists across Michigan, USA to come together to collect clinical data, share best practices and implement evidence based quality improvement activities. One of their projects is crowd reviewing of RALP by international experts for quality of the nerve spare in order to improve surgical outcomes. 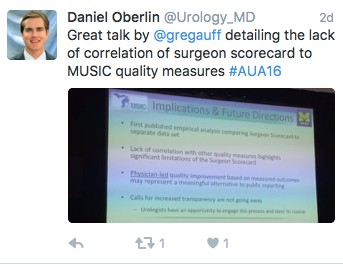 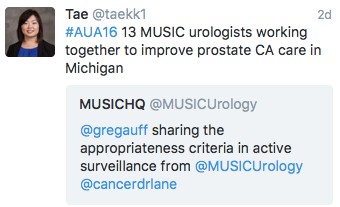 The MET debate continues to cause controversy. In the UK there has been almost uniform abandonment of the use of tamsulosin for ureteric stones following The Lancet SUSPEND RCT. 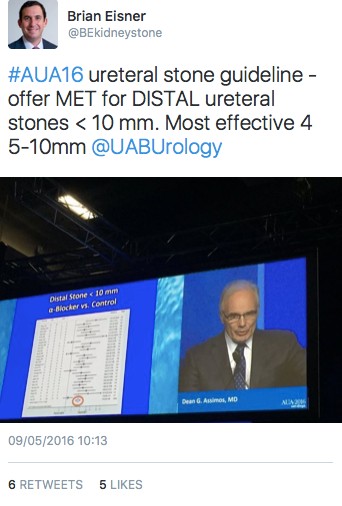 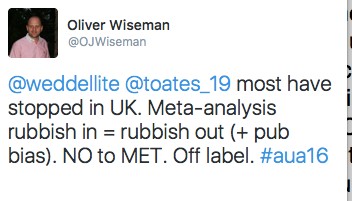 The MET crossfire debate was eagerly awaited. The debate was led by James N’Dow (@NDowJames) arguing against and Philipp Dahm (@EBMUrology) in favour of MET. Many have criticised the SUSPEND paper for lack of CT confirmation of stone passage. Dr Matlaga (@BrianMatlaga) stated that comparing previous studies of MET to SUSPEND is like comparing apples to oranges due to different outcome measures. He recommended urologists continue MET until more data is published. More conflicting statements were made suggesting that MET is effective in all patients especially for large stones in the ureter. The AUA guidelines update was released and stated that MET can be offered for distal ureteric stones less than 10mm. 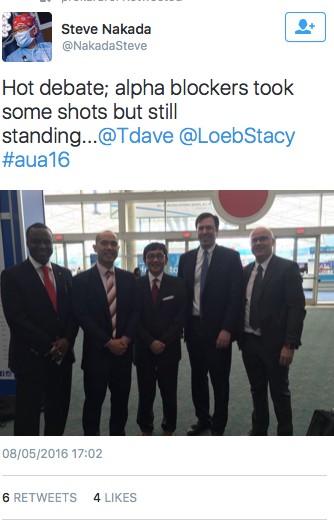 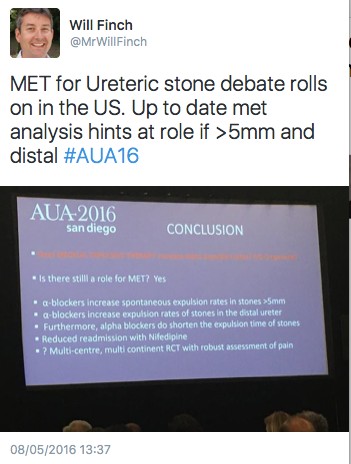 In a packed Endourology video session there were many high quality video presentations. One such video was a demonstration of the robotic management for a missed JJ ureteric stent. Khurshid Ghani (@peepeeDoctor) presented a video demonstrating the pop-corning and pop-dusting technique with a 100w laser machine.

One of the highlights of the Sunday was the panel discussion plenary session, Screening for Prostate Cancer: Past, Present and Future. In a packed auditorium Stacy Loeb (@LoebStacy), gave an excellent overview of PSA screening with present techniques including phi, 4K and targeted biopsies. Freddie Hamdy looked into the crystal ball and gave a talk on future directions of PSA testing and three important research questions that still needed to be answered. Dr. Catalona presented the data on PSA screening and the impact of the PLCO trial. He argued that due to inaccurate reporting, national organisations should restore PSA screening as he felt it saved lives. 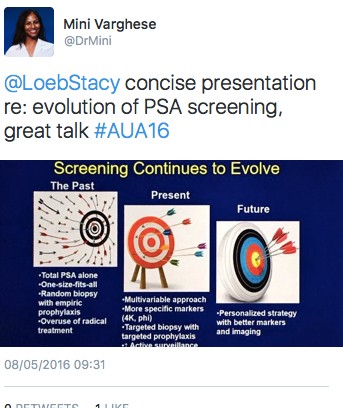 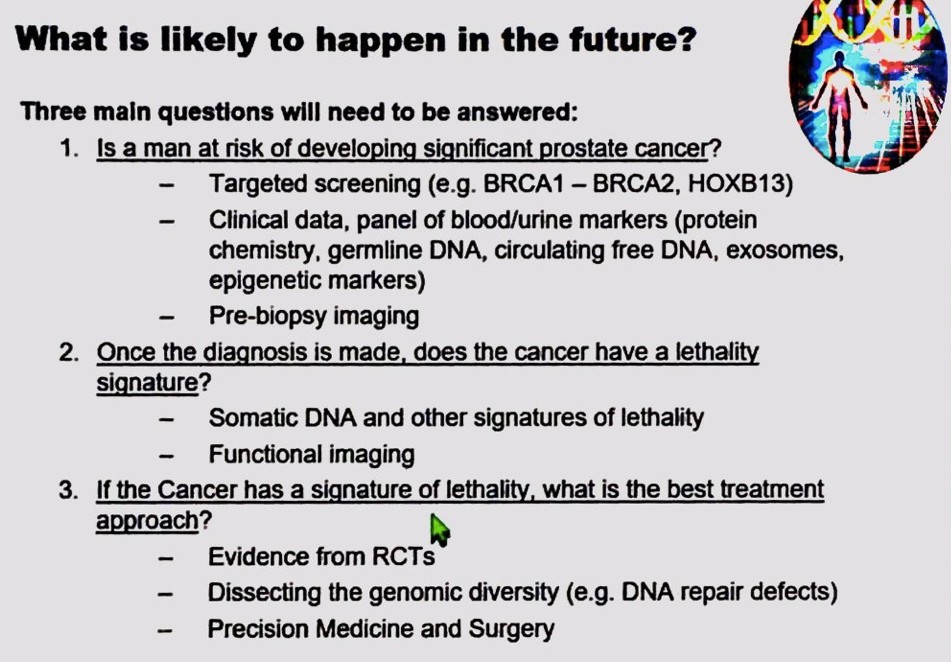 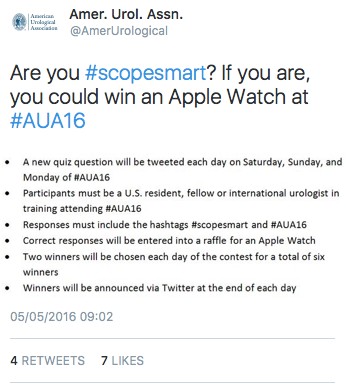 There was a twitter competition for residents and fellows requiring participants to  tweet an answer to a previously tweeted question including the hashtag #scopesmart and #aua16. The prize was Apple Watch. Some of the questions asked included; who performed the 1st fURS? And what is the depth of penetration of the Holmium laser?

UK trainees picked up the prizes on the first two days. 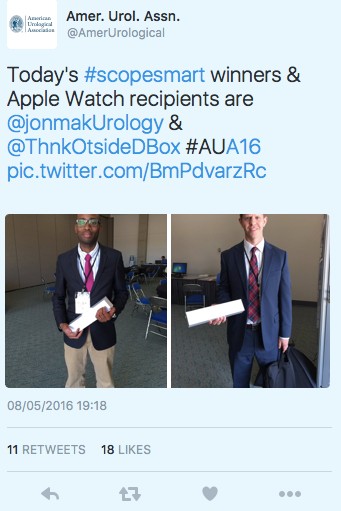 The British Association of Urological Surgeons (BAUS) / BJU International (BJUI) / Urological Society of Australia and New Zealand (USANZ) session was a real highlight of day three of the AUA meeting. There were high quality talks from opinion leaders in their sub specialities. Freddie Hamdy from Oxford University outlined early thoughts from the protecT study and the likely direction of travel for management of clinically localised prostate cancer. Prof Emberton (@EmbertonMark) summarised the current evidence for the role of MRI in prostate cancer diagnosis including his thoughts on the on going PROMIS trial. Hashim Ahmed was asked if HIFU was ready for the primetime and bought us up to speed with the latest evidence. 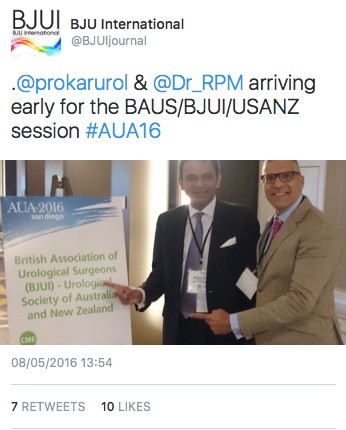 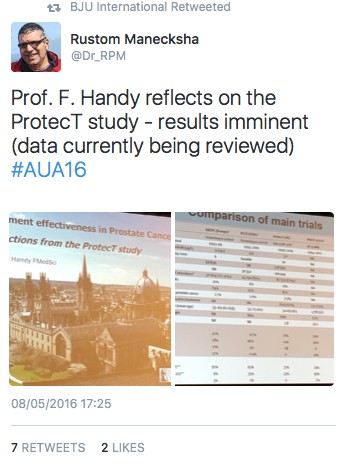 The eagerly awaited RCT comparing open prostatectomy vs RALP by the Brisbane group was summarised with regards to study design and inclusion criteria. It is due for publication on the 18th May 2016 so there was a restriction of presenting results.  Dr Coughlin left the audience wanting more despite Prof. Dasgupta’s best effort to get a sneak preview of the results!  We learnt from BAUS president Mark Speakman (@Parabolics) about the UK effort to improve the quality of national outcomes database for a number of index urological procedures. 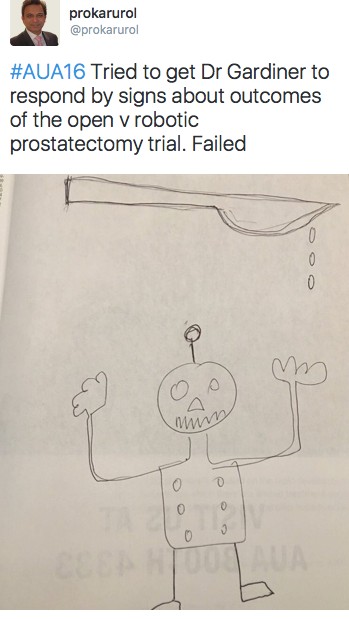 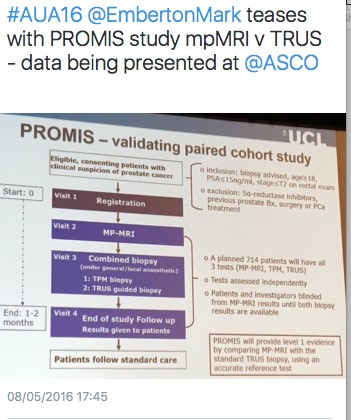 Oliver Wiseman (@OJWiseman) gave us a flavour of outcomes from the BAUS national PCNL database and how they are trying drive up standards to improve patient care. A paediatric surgery update was given by Dr Gundeti. The outcomes of another trial comparing open vs laparoscopic vs RALP was presented. There was no difference in outcomes between the treatment modalities but Prof. Fydenburg summarised by saying that the surgeon was more important determinant of outcome than the tool. Stacy Loeb closed the meeting with an excellent overview of the use of twitter in Urology, followed by a drinks reception. 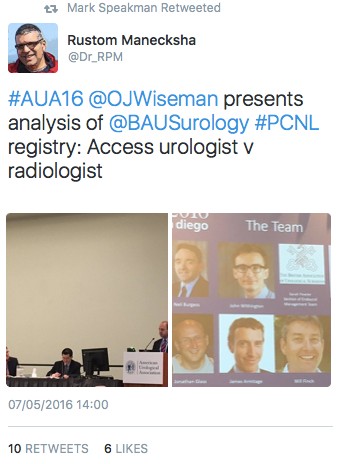 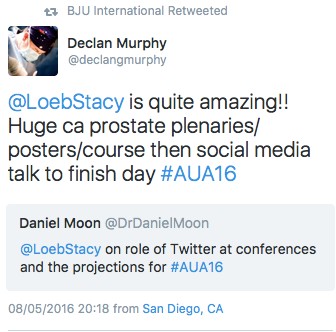 It was not all about stones and robots. The results of the Refractory Overactive Bladder: Sacral NEuromodulation vs. BoTulinum Toxin Assessment (ROSETTA) trial results were presented. Botox came out on top against neuromodulation in urgency urinary incontinence episodes over 6 months, as well as other lower urinary tract symptoms. 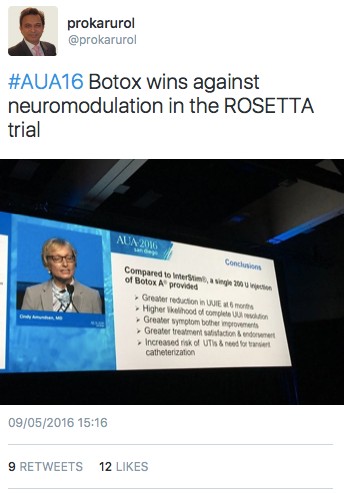 The late breaking abstract session presented by Stacy Loeb highlighted a paper suggesting a 56% reduction in high-grade prostate cancer for men on long term testosterone. This was a controversial abstract and generated a lot of discussion on social media. 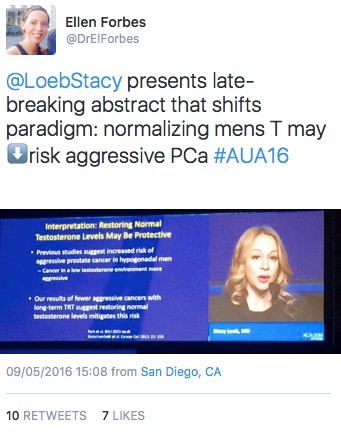 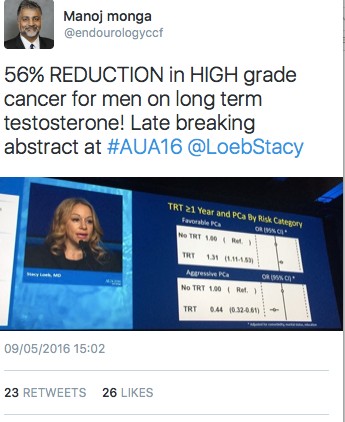 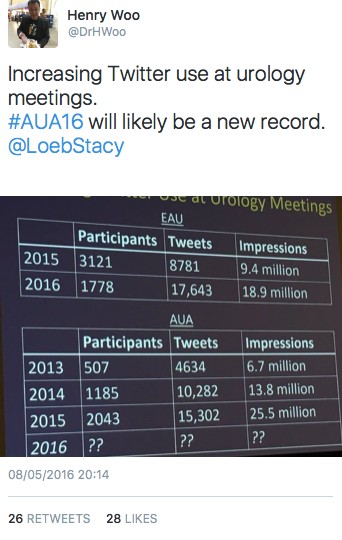 It has been an excellent meeting in San Diego and we caught up with old and met new friends. It was nice to meet urologists from across the globe with differing priorities and pressures. There was a good British, Irish and Australian contingent flying the flag for their respective countries. It was another record-breaking year for the #AUA16 on twitter. It surpassed the stats for #AUA15 with over 30M impressions, 16,659 tweets 2,377 participants. See you all in Boston for AUA 2017.