Dr Indy Gill, as everyone knows, has always been a pioneer of minimally invasive surgery, and has continued to push the boundaries of this over the past 20 years. Some of this progress has been seriously exciting, both for us mere mortals who have visited his operating room or viewed his live surgery, and also for Dr Gill as he has continued to reinvent what is possible.   Tackling a Level II/III caval thrombus using robotic surgery, exploring nephron-sparing surgery with anatomically extreme tumours, and now zero ischaemia – all of this progress has been very thrilling indeed.

But last week, I realised that there is something that is capable of getting the great Dr Gill REALLY excited, and I thought I would share that with you.

It started after Indy accepted an invitation from myself and my colleague, Daniel Moon, to join our international faculty at the National Bladder and Kidney Cancer Symposium which we convene here in Melbourne. Our faculty already included Dr Mike Stifleman (NYU), Dr Colin Dinney (MD Anderson), Dr Simon Horenblas (National Cancer Institute, The Netherlands), Dr Nick James (University of Birmingham), and Dr Maha Hussein (University of Michigan), as well as an excellent faculty from around Australia and New Zealand. This symposium is convened at the world famous Melbourne Cricket Ground (MCG), one of the world’s greatest sporting arenas, and one of the most famous cricket grounds in the world. It recently broke the world record for attendance at an international test cricket match when over 91,000 people attended the Australia versus England “Ashes” match on Boxing Day.

I was aware that Indy receives about 1000 emails per day and we wanted to catch his eye as we planned the program. I therefore emailed him with the subject heading, “Opening the batting at the MCG?”, in the certain knowledge that as a self-confessed “cricket tragic”, he might just respond! And here is his response: 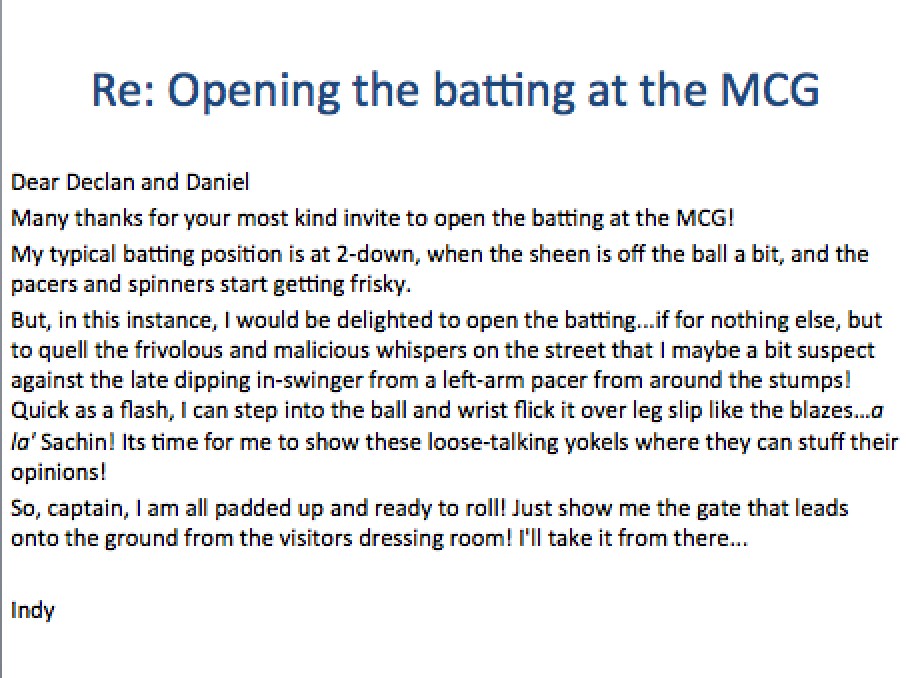 Apologies to those (me included) who do not understand “cricket-speak”! However one can tell that Indy, like everyone else I know from the sub-continent, is a big cricket fan. The stage was therefore set: our Symposium would benefit from Indy presenting a spectacular overview of advances in nephron-sparing surgery with the wonderful backdrop of one of the world’s greatest sporting arenas and a mecca for cricket lovers.

What we did not know was that by chance, one of the greatest cricketers of all time, legendary leg-spin bowler Shane Warne, was hosting a private charity cricket match in aid of The Shane Warne Foundation on the hallowed turf during our Symposium. As soon as we realised, we started plotting to see if we could arrange for the Urology Legend to meet the Cricket Legend. A few phone calls later and it had been agreed- “Warney” would meet Indy at 08:30 the next morning.

Put simply, I have never seen anybody so excited in my entire life. I don’t think Indy slept very much as he looked forward with child-like amazement to his encounter with one of the greatest cricket players of all time. He paced up and down somewhat nervously (I would say considerably more nervous than he would be before performing one of his live surgery spectaculars to a gigantic audience), as we waited for our escort to bring us to the home team changing room at the MCG. He seemed somewhat breathless, he was speaking terribly quickly, his eyes scanning nystagmus-like as he looked like someone having a supraventricular tachycardia.

Meanwhile in the auditorium upstairs, Indy’s colleague Dr Mihir Desai, another cricket tragic, was broadcasting a live robotic cystectomy from the University of Southern California to our auditorium. When we explained that Indy was a little delayed as he was meeting Shane Warne downstairs, this was met with an audible sigh along with some muttering from Dr Desai’s robot console as he clearly would much prefer to have been in Melbourne than in California at that particular moment. “Stop the procedure” he pleaded in vain, “if I leave now I can be there in 15 hours”.

And then the big moment arrived – Shane Warne, cricket legend, taker of over 700 Test wickets, deliverer of the “Ball of the Century”, and one of only five of Wisden’s Cricketers of the 20th Century, walked over to the star-struck urology legend and shook hands.

They chatted for about 10 minutes about various great cricketing moments and about mutual friends in Indian cricket. They both seemed to be thoroughly enjoying themselves and one could tell that Indy was relishing every moment he was spending in the company of true cricket royalty. Shane then happily signed an Australian cricket jersey before we finally dragged Indy back to the Symposium upstairs. I don’t think it is unreasonable to say that he was somewhat starstruck: 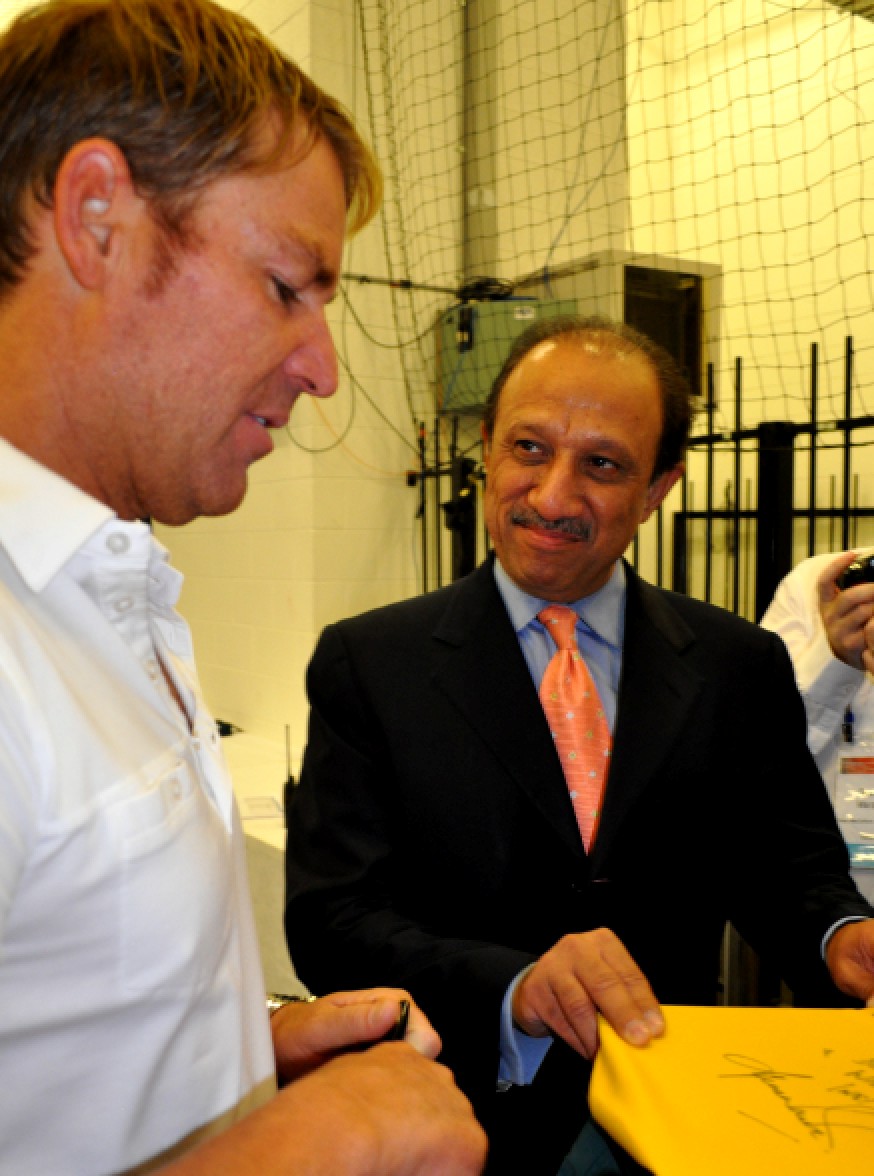 The moment was shared by Daniel Moon on Twitter using the official meeting hashtag #bkcs14:

Social media metrics supplied by Symplur at that time showed healthy activity for a sub-specialist uro-oncology meeting with about 250 delegates:

However, when Shane Warne re-tweeted us to his 1.46 million followers, the meeting statistics went through the roof! We had gone from 37,000 digital impressions to almost 1,500,000 impressions:

In the twisted world of social media statistics, #bkcs14 has become one of the biggest scientific meetings in the world this year!

Indy then returned to the relatively mundane world he normally inhabits by showing footage of a robotic-assisted partial nephrectomy with zero ischaemia for a 10cm interpolar tumour in a solitary kidney (including vascular reconstruction of a feeding vessel), followed by a super-human robotic resection of a kidney tumour with level II caval thrombus done as part of a live surgery broadcast to 1000 people. Interesting for sure, but not what gets him really excited.

Will you bury your Bentley for pleasures in your ‘after life’?