Let’s Paws for a Second!

Lets paws for a second before we all start howling about nothing! 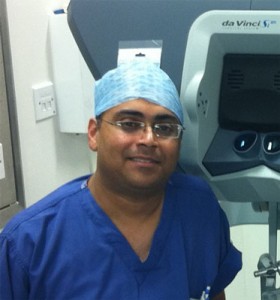 Recently while driving to a Day Surgery list at Heatherwood hospital in Ascot, I happened to listen to BBC Radio 4. There was a report regarding high accuracy for the detection of stomach cancer by a simple breath test. This reminded me of a study published some time ago in European Urology on the ability of a dog to detect prostate cancer by smelling a sample of urine. For a skeptic like me, reading that article in the platinum journal had indeed brought a sarcastic chuckle. Pondering over the paper and the report on the radio, it just dawned on to me as to why I would instantly believe a high-tech nanosensor detecting stomach cancer but not a mortal Belgian Malinois shepherd! This formed my basis of my blog.

It is well known that when someone is afflicted by a disease or cancer, there is a change that occurs in the internal milieu. In the vast majority, before this change can be manifested clinically, there is definite change seen biochemically.  There is emerging evidence that volatile organic compounds (VOC) that are exhaled either in the breath or in bodily fluids can indicate these changes reflecting the underlying pathology.  This is where the humble mongrel comes into play. Olfactory bulb in dogs is forty times bigger than of humans relative to total brain size. Having 125 to 220 million smell-sensitive receptors, their olfactory sense is up to one hundred thousand to one million times more sensitive than a human’s. So, there may be some sense and science in the paper that I had initially chuckled at. The earliest report is a letter to the Lancet reporting the diagnosis of melanoma made after the dog sniffed at a suspicious mole of its owner. Since then, there have been several reports on the ability for the trained dogs to detect various cancers and chronic illness, urological diseases. One of the earliest attempts to detect prostate cancer can be dated back to 2002. Further attempts were made to initiate trials in 2003 but no published results on Medline were found. Earliest published paper can be traced back to 2008, wherein the study did not support the concept of dogs being able to detect prostate cancer. This was recently challenged by the article by Cornu J et al that revealed a sensitivity and specificity of 91% for biopsy proven prostate cancer! In fact, one of the three patients who was wrongly classified as prostate cancer, was found to have cancer on a re-biopsy! The potential VOC that may be found in the urine of a patient with prostate cancer can be found in this letter to the editor. Indeed, to carry out more research, “Medical Detection Dogs” is aiming to recruit prostate cancer patients within the UK!

One would obviously think that if we can diagnose prostate cancer, why not bladder cancer? This is precisely what led to a “proof of principle” study headed by Carolyn Willis and findings were published in the BMJ. The dogs had a mean success rate of 41%, compared with 14% expected by chance alone. Multivariate analysis suggested that the dogs’ capacity to recognise a characteristic bladder cancer odour was independent of other chemical aspects of the urine detectable by urinalysis. What was astonishing about this study was on one occasion during training, all dogs unequivocally indicated as positive a sample from a participant recruited as a control on the basis of negative cystoscopy and ultrasonography. The consultant responsible for the patient was sufficiently concerned to bring forward further tests, and transitional cell carcinoma of the right kidney was discovered! The same group further reported specificity that ranged from 92% for urine samples obtained from healthy, young volunteers down to 56% for those taken from older patients with non-cancerous urological disease.

More trials are being carried out for detection of cancers affecting the lung, breast, ovary, bowel and others, a review of which can be found in this article. We may need to wait for a few more years to find out whether we are dealing with real science or we are going in circles like the dog chasing its own tail!

On the lighter note, if you hear an old male dog bark for no apparent reason, think prostate cancer!! Dog is the only other mammal that can be afflicted by prostate cancer and fortunately the doggie world will not be affected by the USPSTF recommendations, as canine prostate cancers do not secrete PSA!

No Classical Music In My Operating Room Please