Calcite is considered to rarely ever be a true component of urolithiasis being present only in 0.01% to 0.25% of all stones [1, 3, 4]. When found within analyzed stone material calcite is often characterized as “artifact”[5, 6] or “factitious”[5, 7, 8]. We report a 70 year-old gentleman with acromegaly found to have calcite stones among the stone mixture extracted from his kidney and mid-ureter. Thus we are certain that these calcite stones are not artifactual.

Introduction
With urinary stone disease affecting approximately 4%-12% [1] of the population, many persons require evaluation and treatment to prevent recurrence. Determining the composition of calculi is an important piece of the workup, since the pathogenesis (and hence effective treatments) differ by stone type [2]. The most frequent components of calculi found in humans include whewellite (calcium oxalate monohydrate, or COM) in 78%, weddellite (calcium oxalate dihydrate, or COD) in 43% and calcium phosphate in the form of apatite in 33% [3]. Calcium carbonate (CaCO3) crystallizes as calcite, aragonite and vaterite. It is often found in pancreatic, biliary and salivary stones; however, calcite is considered to be a true component of urolithiasis only rarely, being present in 0.01% to 0.25% of all stones [1, 3, 4]. When found within analyzed stone material calcite is often characterized as “artefact” [5, 6] or “factitious”[5, 7, 8]. We report a 70 year-old gentleman with acromegaly found to have calcite stones among the stone mixture extracted from his kidney and mid-ureter. Thus we are certain that these calcite stones are not artefactual.

Case Report
A 70 year-old Caucasian male with a remote history of a single stone passage, acromegaly, type 2 diabetes and atrial fibrillation presented with a one month history of mild dysuria, intermittent left flank pain and dark urine. Urinalysis demonstrated microscopic haematuria. He was treated for presumed urinary tract infection without resolution of symptoms. CT urogram was obtained and demonstrated a 1.3 x 1.0 x 0.6 cm stone in the left mid-ureter with associated severe pyelocaliectasis and ureterectasis, with delayed excretion of contrast and two calyceal stones in the left kidney measuring 1.3 x 0.6 and 1.0 x 0.6 cm. The patient did not have a history of prior urological surgery, metabolic evaluation for stone prevention, or stone analysis.

The patient underwent attempted left retrograde ureteroscopy with conversion to percutaneous nephrolithotomy and removal of a 1.2 cm impacted mid-ureteric stone and 2 cm of stone material from the lower pole of the left kidney. Analysis of the left kidney stone in the Mayo clinical laboratory by infrared (IR) spectroscopy demonstrated 80% COM, 10% COD and 10% calcium phosphate in the form of apatite. One piece of stone from the lower pole was sent for culture, and it was negative for bacterial or fungal growth. The remainder of the stone material removed from the lower pole and mid-ureter (a total of 8 pieces; Figure 1) was sent to Indiana University, where it was analyzed using microscopic computed tomography (micro CT) and infrared spectroscopy[9]. By micro CT all 8 pieces appeared to be composed of admixtures of COM, COD, and apatite. However, two of the fragments had a smooth surface and were black, rather than the brown/gray appearance of the rest (Figure 2). Fourier Transform Infrared (FT-IR) spectroscopy analysis revealed that they were composed of calcite (Figure 3). A 24-hour urine collection revealed a low urine pH (5.2) high citrate (1273 mg) and calcium (333 mg). The resulting supersaturations for calcium oxalate (CaOx) (2.03 DG ; reference mean 1.77 DG) and uric acid (3.72 DG; reference mean 1.04 DG) were increased while for calcium phosphate it was low (-1.05 DG; reference mean 0.21 DG).

Discussion
About 1% of urinary stones presented for analysis are felt to have factitious features [1]. Some proportion of these false stones are due to contamination, for example when a specimen is dropped and another material is picked up in its place. But presentation of a false stone can also be a sign of psychiatric problems or drug addiction[10], so correct identification of factitious calculi is clinically important.

It is understandable that a stone would be assumed factitious if identified as calcite [10], since calcite is a common mineral in soil and gravel and its occurrence in urinary stones has not been well-documented. In the largest series in the literature Gault et al.[11] reported a series of 15 patients with 67 stones containing carbonate. All the specimens were spontaneously passed by the patients and later presented for analysis, although in many evidence was felt to be strong that these represented true and not factitious stones. A unique feature of the present study is that the stone specimens were removed from the patient’s kidney and mid-ureter by percutaneous access—with video recording of the procedure—thereby ruling out any possibility of the material being of foreign origin.

Calcium carbonate has been commonly described as a component of “milk of calcium” stones, which can rarely form as partially calcified fluid collections within obstructed regions of the upper urinary collecting system including hydronephrosis[12-15]. In Gault’s series, several patients had medullary sponge kidney, and he hypothesized that that high urine concentrations of bicarbonate, carbonate or calcium in an alkaline urine pH were important features. Furthermore, Gault demonstrated that calcite stones dissolved in vitro at a pH of 5.0 but not at 6.5, suggesting they would not persist in an acid milieu [11]. An interesting aspect of the current case is that not all of the stone fragments had the same composition. This diversity in stone composition and appearance has been described for medullary sponge kidney[16], and the calcite case described by Gault et al.[11]. In the current case a majority (6 of the 8 pieces recovered from the kidney and ureter) had the obvious appearance of mixed calcium oxalate stones, while 2 were darker in color and possessed a smoother surface. Computer tomography imaging and direct visualization of this patient’s kidney during percutaneous nephrolithotomy demonstrated no evidence of medullary sponge kidney, however his initial CT urogram demonstrated severe pyelocaliectasis and ureterectasis proximal to the obstructing mid-ureteral stone. In addition, it is interesting that the 24 hour urinary pH of this patient was quite acidic, which is not consistent with the formation or persistence of calcium carbonate crystals. Therefore, it seems likely that these particular stone fragments formed secondary to the isolated urinary space caused by the obstructing mid-ureteral stone, leading to severe proximal hydroureteronephrosis and urinary stasis.

Conclusion
Calcite is commonly found in salivary and biliary sones, and in the relatively unusual case of milk of alkali stones that can form behind renal obstructions. The current study and review of the literature suggests calcite can sometimes be a mineral component of true renal calculi. However, the mechanisms underlying their formation are likely to be unique and involve a microenvironment of stasis, alkalinity, and abundant calcium. If calcite occurs in mixture with other minerals—as in the present case—its presence will likely go undetected by typical analysis methods, and as such may be underreported in the literature. Furthermore, physicians should not automatically assume that all calcite stones are artefactual or factitious in nature.

Acknowledgments
This work was supported by grants from the National Institutes of Health including the Mayo Clinic O’Brien Urology Research Center P50 DK083007 and the Mayo Clinic Center for Translational Science Activities. We are also thankful to Brittni Barnett for coordinator support during the study. This study was approved by the Mayo Clinic Institutional Review Board. 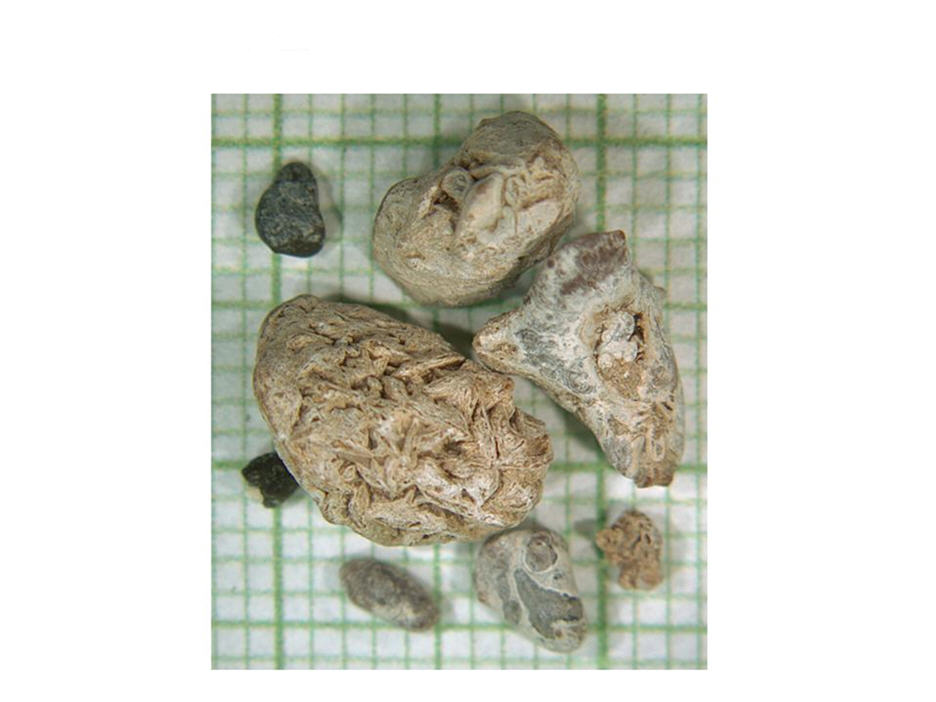 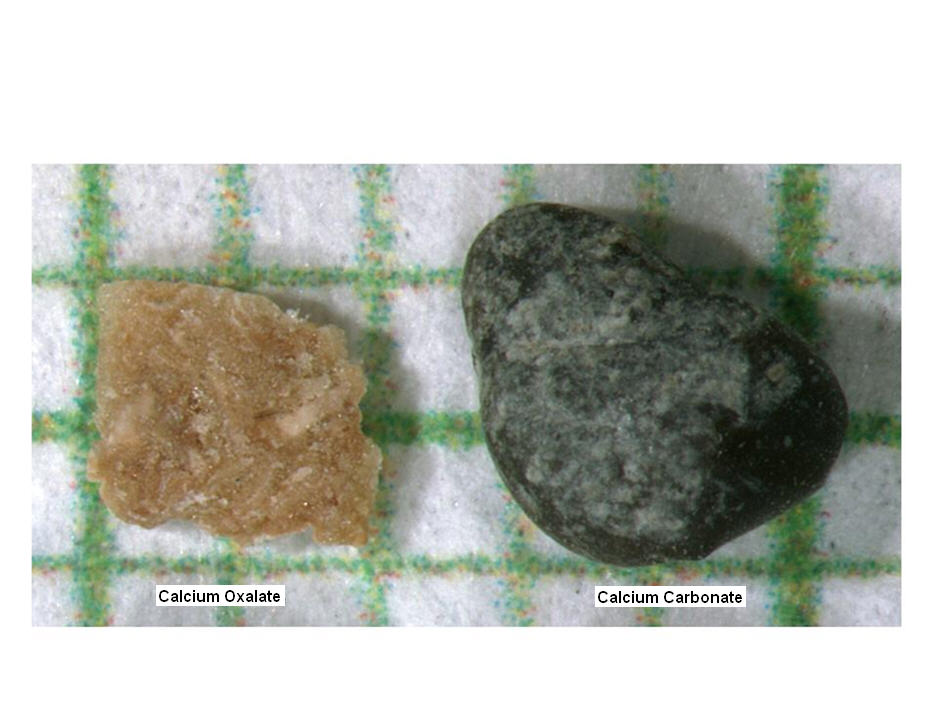 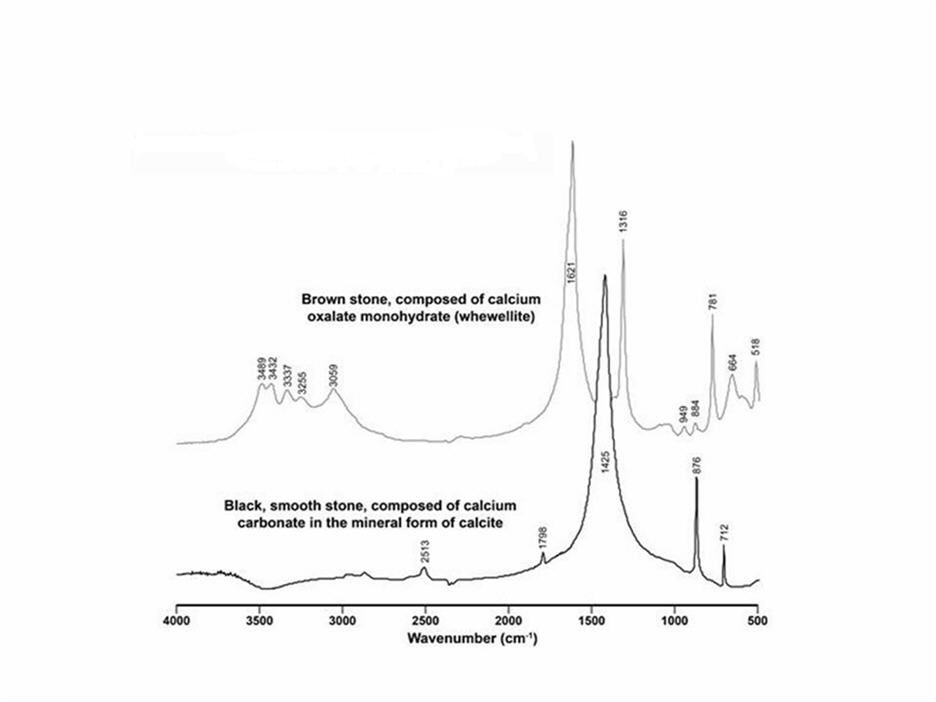