You are here: Home1 / cryptorchidism 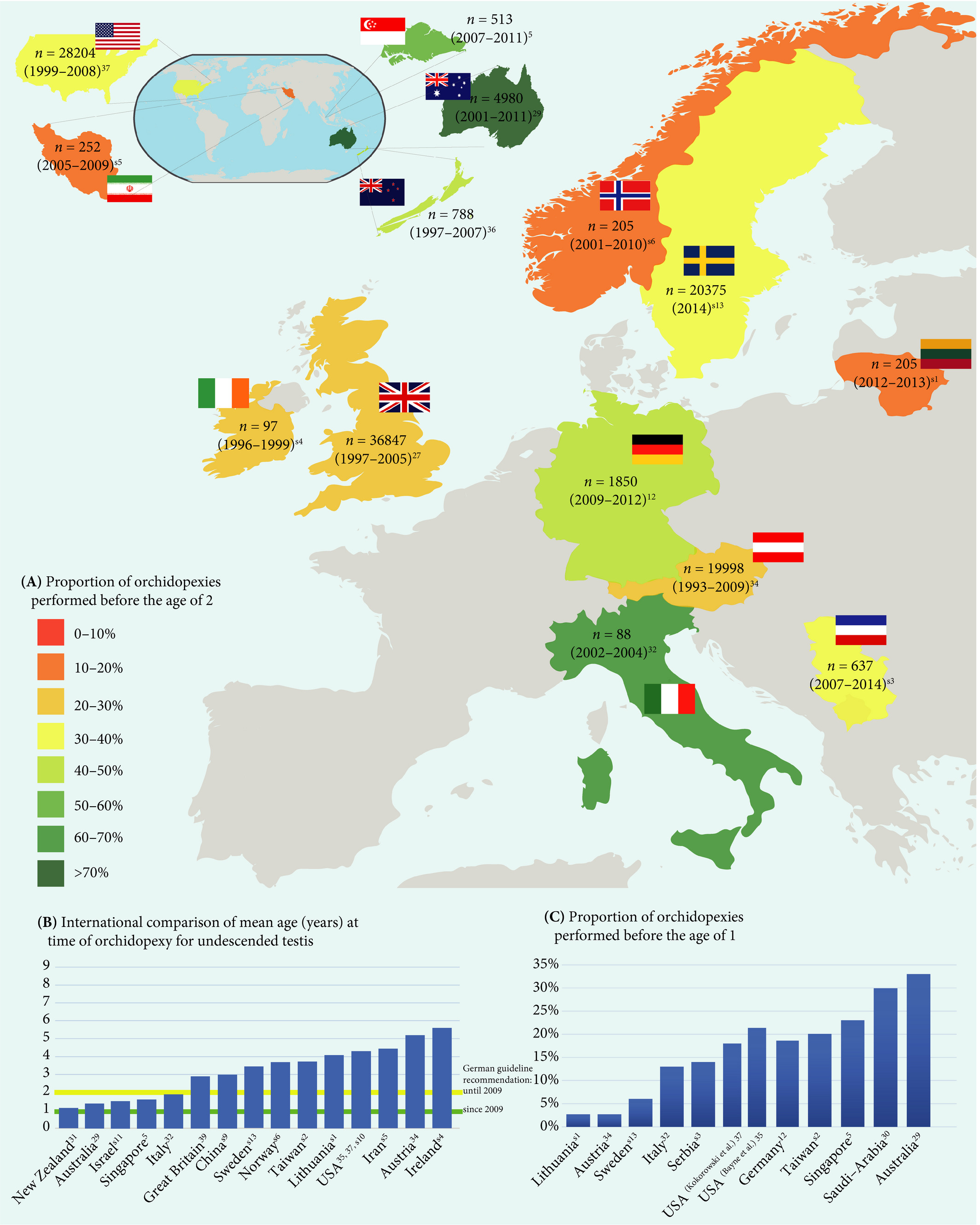 This report presents a case of splenogonadal fusion in a 13-year-old boy and reviews the relevant literature.

Abstract
Splenogonadal fusion is a rare, benign, congenital anomaly characterized by fusion of the spleen and a gonad; it is frequently associated with other organ abnormalities. Approximately 175 cases of splenogonadal fusion have been reported. The diagnosis is rarely suspected preoperatively. Splenogonadal fusion is most commonly an incidental finding during inguinal exploration for an undescended testis or hernia. We report a 13-year-old boy who was admitted to our clinic with symptoms of an undescended testis and diagnosed with splenogonadal fusion laparoscopically, and discuss the relevant literature.
Introduction
The prevalence of congenital anomalies is 23.9~32.4 per 1000 births (1). According to the European Surveillance of Congenital Anomalies (EUROCAT), congenital heart defects are the most common non-chromosomal subgroup, at 6.5 per 1000 births, followed by limb defects (3.8 per 1000), urinary system anomalies (3.1 per 1000), and nervous system defects (2.3 per 1000) (2). Splenogonadal fusion is a rare congenital anomaly. Approximately 175 cases of splenogonadal fusion have been reported since Bostroem first described this condition in 1883. Most of the cases have been reported with cryptorchidism. Splenogonadal fusion is infrequently diagnosed preoperatively because of its rarity. It was reported that orchiectomy is done unnecessarily in these cases (3). Therefore, a correct diagnosis of splenogonadal fusion using a laparoscopic approach can save the affected gonad.
Case Report
A 13-year-old boy was admitted to our clinic with symptoms of an undescended left testis and intermittent swelling in the left scrotal region. On physical examination, while the right testis was normal in size and location in the scrotum, the left testis was palpated in the mid-inguinal region. In addition, a left inguinal hernia was detected with the Valsalva maneuver. No other physical abnormalities were detected in a systemic evaluation. Routine hematologic and biochemical analyses were normal. With the diagnosis of an undescended testis, a left orchiopexy was planned via a standard inguinal incision. Left inguinal exploration revealed that the left testis was in the inguinal canal. The associated hernia sac was dissected and repaired. At this point, a fleshy, smooth, reddish-brown vascular structure was seen on the superior part of the testis lying in the abdominal cavity (Figure 1).
Figure 1. The vascular shaped structure and testis are seen

The vascular structure was approximately 15 cm long and 1 cm wide. The procedure was concluded with a left orchiopexy. Histopathologically, the specimen was normal splenic tissue (Figure 3).
Figure 3: Pathological appearance of the dissected tissue (H&E, 10x)

The patient was discharged 24 hours postoperatively, with no complications.
Discussion
Some congenital anomalies of the spleen are common, such as splenic lobulation and accessory spleens, while other conditions are rare, such as wandering spleen, polysplenia, and splenogonadal fusion (4). Splenogonadal fusion is a rare congenital anomaly characterized by fusion of the spleen and a gonad. Although the age of reported cases ranges from stillborn to 81 years, approximately half of the cases presented in patients younger than 10 years and 82% in those younger than 30 years (5). In 1956, Putschar and Manion reviewed 30 cases and categorized this anomaly into continuous and discontinuous types (6). The discontinuous type lacks any anatomic connection between the gonad and spleen. By contrast, as in our case, the continuous type involves a direct anatomical connection, between the spleen and gonad, by a cord that may be totally splenic, beaded with multiple splenic nodules, or composed of fibrous tissue. Both types are equally frequent. However, the continuous type carries a 5-fold higher risk of associated anomalies than the discontinuous type, such as peromelia (absence or malformation of the limbs), micrognathia, cardiac defects, cleft palate, anal anomalies, craniosynostosis, spina bifida, Möbius syndrome, microgastria, thoracopagus, and osteogenesis imperfecta (5,6). One third of the cases reviewed by Gouw et al. were associated with one or more congenital defects, excluding congenital inguinal hernia or cryptorchidism (7). In our case, no organ anomaly except cryptorchidism was detected.
Although the aetiology of this condition is not clear, several mechanisms have been proposed to explain it. All of the theories are based on the close proximity of the left gonadal ridge and splenic anlage between the 5th and 8th weeks of gestation. This explains why splenogonadal fusion is almost always seen on the left. During this period, several groups of cells derived from the coelomic epithelium and mesenchyme of the mesogastrium aggregate to form the splenic anlage in the dorsal mesogastrium. This occurs at approximately the same time as the gonadal ridge is formed between the dorsal mesogastrium and mesonephros on either side. During weeks 6 and 7, rotation of the stomach to the left and growth of the dorsal mesogastrium translocate the spleen to the left side of the abdominal cavity, bringing it into close proximity with the gonadal ridge (6). In addition, it was proposed that cryptorchidism and continuous splenogonadal fusion are caused by abnormal development of the cranial suspensory ligaments of the testis and failure of their involution (8).
Splenogonadal fusion is most commonly seen incidentally during inguinal exploration for cryptorchidism, a hernia, or a hydrocele. Cryptorchidism is the genital anomaly seen most commonly in splenogonadal fusion. In a review of 111 cases with splenogonadal fusion, cryptorchidism was reported in 31% (9). The most common complaint is testicular swelling. Another presentation is acute painful scrotal swelling secondary to swelling of the ectopic splenic tissue as a consequence of various processes, such as malaria, leukaemia, mononucleosis, and traumatic rupture of the ectopic spleen (5, 10). Splenogonadal fusion is seldom diagnosed or suspected preoperatively. Almost one in six cases of splenogonadal fusion has been diagnosed at autopsy (3). When suspected clinically, technetium isotope scanning is used to detect accessory splenic tissue (11). Computed tomography (CT) and ultrasonography have also been used for the diagnosis (12). In most cases, the splenic tissue can be dissected off the gonadal structures easily; if there are doubts concerning the nature of the swelling, an intraoperative frozen section may confirm the diagnosis. Diagnostic and operative laparoscopic approaches are often indicated in children for cryptorchidism, appendectomy, herniorrhaphy, and an examination of the abdominal organs. In the continuous type of splenogonadal fusion there is a direct anatomical connection between the spleen and gonad through a cord of splenic tissue. In this context, a few authors have reported that diagnostic laparoscopy can be performed via an open umbilical approach. With this approach, vascular connections, the vas deferens, and other anomalies can be seen clearly. Since laparoscopy is helpful in diagnosing this rare condition, and for planned surgical treatment, as in our case, a few cases of splenogonadal fusion have been diagnosed and managed with laparoscopy (13, 14). A laparoscopic approach prevents the loss of time due to secondary operations and frozen section examination or radiological imaging methods.
Another problem with this anomaly is unnecessary orchiectomy. Indeed, patients can undergo an unnecessary orchiectomy because a primary testicular neoplasm is suspected. In one study, 37% of the patients with splenogonadal fusion underwent an unnecessary orchiectomy for a suspected primary testicular neoplasm (3).
In summary, although extremely rare, splenogonadal fusion should be considered during the evaluation of an undescended testis.
References
1-     Dastgiri S, Stone DH, Le-Ha C, Gilmour WH. Prevalence and secular trend of congenital anomalies in Glasgow, UK. Arch Dis Child 2002;86:257-63.
2-     Dolk H, Loane M, Garne E. The prevalence of congenital anomalies in europe. Adv Exp Med Biol 2010;686:349-64.
3-     Karaman MI, Gonzales ET. Splenogonadal fusion: report of 2 cases and review of the literature. J Urol 1996;155:309-11
4-     Varga I, Galfiova P, Adamkov M, Danisovic L, Polak S, Kubikova E, Galbavy S. Congenital anomalies of the spleen from an embryological point of view. Med Sci Monit 2009;15:269-76.
5-     Khairat AB, İsmail AM. Splenogonadal fusion: Case presentation and literature review. J Pediatr Surg 2005;40:1357-60.
6-     Putschar WGJ, Manion WC. Splenic-gonadal fusion. Amer J Pathol 1956;32:15-33.
7-     Gouw AS, Elema JD, Bink-Boelkens MT. The spectrum of splenogonadal fusion. Case report and review of 84 reported cases. Eur J Pediatr 1985;144:316-33.
8-     Kaya C, Koca O, Karaman MI, Radmayr C. Splenogonadal fusion in a 13-year-old boy with contralateral displaced intraabdominal testis. Urology 2010;75:173-5.
9-     Cortes D, Throup JM, Visfeldt J. The pathogenesis of cryptorchidisim and Splenogonadal fusion: A new hypothesis. Br J Urol 1996;77:285-90.
10- Andrews RW, Copeland DD, Fried FA. Splenogonadal fusion. J Urol 1985;133:1052-3.
11- Guarin U, Dumitrieva Z, Ashley SJ. Splenogonadal fusion—rare congenital anomaly demonstrated by 99mTc-sulphur colloid imaging: case report. J Nucl Med 1975;16:922-4.
12- Li YH. Preoperative detection of splenogonadal fusion by CT. Surg Radiol Anat 2009;31:733-5.
13- Papparella A. Laparoscopy in the Diagnosis and Management of Splenogonadal Fusion: Case Report. Eur J Pediatr Surg 2011;21:203-4.
14- Braga LH, Braga MM, Dias MA. Laparoscopic diagnosis and treatment of splenogonadal fusion associated with intra-abdominal cryptorchidism in a child. Pediatr Surg Int 1999 ;15:465-6.
Date added to bjui.org: 16/02/2012