Blog - Latest News
You are here: Home1 / Article of the Week2 / Video: Four-year outcomes from a multiparametric MRI based active surveillance... 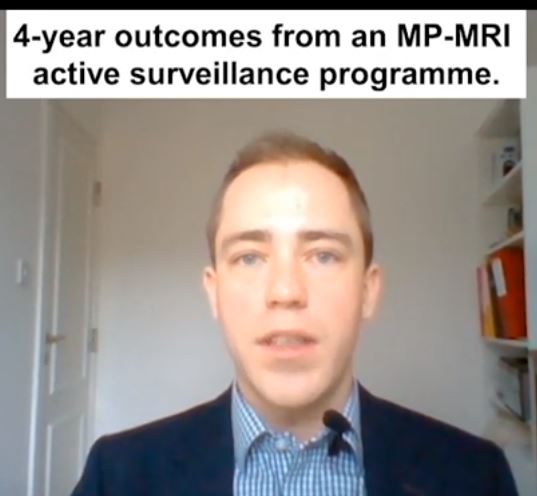 To report outcomes from a multiparametric (mp) magnetic resonance imaging (MRI)‐based active surveillance programme that did not include performing protocol biopsies after the first confirmatory biopsy.

All patients diagnosed with Gleason 3 + 3 prostate cancer because of a raised PSA level who underwent mpMRI after diagnosis were included. Patients were recorded in a prospective clinical database and followed up with PSA monitoring and repeat MRI. In patients who remained on active surveillance after the first MRI (with or without confirmatory biopsy), we investigated PSA dynamics for association with subsequent progression. Comparison between first and second MRI scans was undertaken. Outcomes assessed were: progression to radical therapy at first MRI/confirmatory biopsy and progression to radical therapy in those who remained on active surveillance after first MRI.

A total of 211 patients were included, with a median of 4.2 years of follow‐up. The rate of progression to radical therapy was significantly greater at all stages among patients with visible lesions than in those with initially negative MRI (47/125 (37.6%) vs 11/86 (12.8%); odds ratio 4.1 (95% CI 2.0–8.5), P < 0.001). Only 1/56 patients (1.8%) with negative initial MRI scans who underwent a confirmatory systematic biopsy had upgrading to Gleason 3 + 4 disease. PSA velocity was significantly associated with subsequent progression in patients with negative initial MRI (area under the curve 0.85 [95% CI 0.75–0.94]; P <0.001). Patients with high‐risk visible lesions on first MRI who remained on active surveillance had a high risk of subsequent progression 19/76 (25.0%) vs 9/84 (10.7%) for patients with no visible lesions, despite reassuring targeted and systematic confirmatory biopsies and regardless of PSA dynamics.

Men with low‐risk Gleason 3 + 3 prostate cancer on active surveillance can forgo protocol biopsies in favour of MRI and PSA monitoring with selective re‐biopsy.