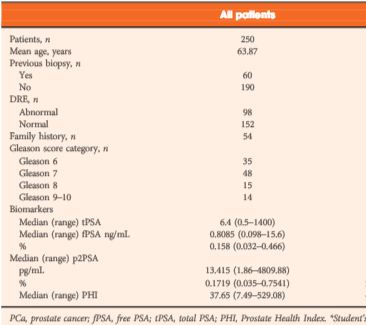 The days of using one PSA threshold to trigger a biopsy for all men are over, and the field has moved toward a more individualized approach to prostate biopsy decisions, taking into account each patient’s specific set of risk factors. Foley et al. [1] provide compelling evidence supporting the use of the Prostate Health Index (PHI) as part of this multivariable approach to prostate biopsy decisions.

There is now a large body of evidence showing that the PHI is more specific for prostate cancer than total PSA and percent free PSA, as was concluded in a 2014 systematic review [2]. Moreover, several recent studies have confirmed the superiority of the PHI over its individual components [3, 4] and compared with other markers such as PCA3 [5], for predicting clinically significant prostate cancer.

The present new study by Foley et al. [1] builds on this literature by providing clinically useful data on the role of the PHI in prostate biopsy decisions. Specifically, they examined 250 men with elevated age-specific PSA and/or abnormal DRE who were referred for ≥12-core prostate biopsy as part of the Irish Rapid Access Clinic. The median PHI was 48.6 in men with prostate cancer, vs 33.4 in men without prostate cancer on biopsy. On receiver-operating characteristic analysis, the PHI had a higher area under the curve (AUC) for overall prostate cancer compared with total and percent free PSA (AUCs 0.71, 0.62 and 0.64, respectively), as well as for high grade prostate cancer (AUC 0.78, 0.70 and 0.67, respectively). Compared with the PHI, even the combination of total and percent free PSA had a lower AUC of 0.67 for overall prostate cancer and 0.75 for high grade prostate cancer.

Next, the authors developed a multivariable prediction model incorporating age, family history, DRE and previous biopsy history, along with either PSA or the PHI. Using the PHI in this model rather than total PSA resulted in greater predictive accuracy for the detection of overall and Gleason ≥7 disease. The PHI-based model also showed superior net benefit to the PSA-based multivariable models on decision curve analysis.

These findings are exactly what we would expect, as studies have consistently shown that the PHI outperforms PSA [2, 6]. Other groups from the European Randomized Study of Screening for Prostate Cancer (ERSPC) have also integrated the PHI into multivariable risk prediction through the development of a user-friendly smartphone app called the Rotterdam Risk Calculator [7]. Because our goal is to provide each patient with the best information from which to make decisions about biopsy, it only makes sense to use the best possible combination of markers that we have.

Article of the Week: Using The PHI to improve Prostate Cancer Risk Assessme...
Scroll to top