Since the introduction of robotic surgery in the treatment of patients with prostate cancer (PCa), different surgical innovations have been implemented in order to preserve postoperative functional outcomes while maintaining oncological safety. Sparing the Retzius space during robot‐assisted radical prostatectomy (RARP) was introduced early this decade by Galfano et al [1]. Interestingly, 90% and 96% of patients treated with Retzius‐sparing RARP (RS‐RARP) were continent (no pad/safety pad) at 1 week and 1 year, respectively. Similarly, our group reported a 70% continence rate (no pad) at 1 month after RS‐RARP [2].

The fast urinary continence recovery after RS‐RARP is related to several anatomical factors: the anterior Retzius space is kept intact; the urinary bladder is not dropped; the endopelvic fascia and puboprostatic ligaments are preserved; and there is minimal distortion of the supporting urethral tissues. A recent study reported [3] that less bladder neck descent was observed during postoperative cystogram in patients treated with RS‐RARP than in those treated with standard RARP.

In addition to a higher early continence rate, RS‐RARP has a lower incidence of postoperative inguinal hernia occurrence compared with standard RARP [6]. Theoretically, RS‐RARP may provide several other potential advantages. It may be advantageous if patients require future surgery necessitating access to the Retzius space and dropping of the bladder, such as an artificial urinary sphincter implantation, an inflatable penile prosthesis insertion, or kidney transplantation. In addition, in patients with previous inguinal hernia repair using mesh, it enables the avoidance of anterior adhesions by accessing the prostate directly from the Douglas pouch. Notably, large‐size glands and/or middle‐lobe, advanced/high‐risk PCa, and patients with previous prostatic surgeries can be managed safely with RS‐RARP in experienced hands.

Undoubtedly, oncological safety is our main concern in treating cancer. To determine the effectiveness of new treatment methods, long‐term follow‐up is warranted. Biochemical recurrence (BCR) is widely used as a primary oncological outcome to assess PCa treatment success. To our knowledge, after radical prostatectomy, ~35% of patients are at risk of developing BCR in the next 10 years. Currently, there are insufficient data regarding the oncological outcomes of RS‐RARP. Only four articles have compared early oncological outcomes between RS‐RARP and standard RARP, and there was no significant difference (Table 1). 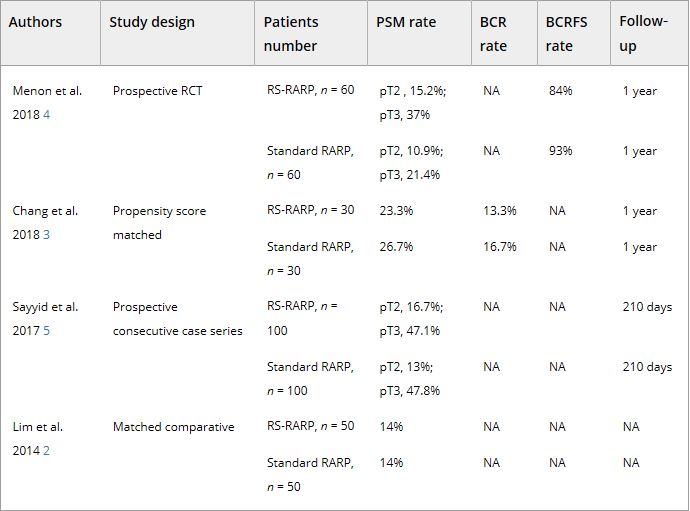 In summary, RS‐RARP is a novel surgical approach which is associated with better urinary continence recovery in the first few months compared with standard RARP [2,3,4,5]. This superiority might be maintained [5] or equalized at 1 year [3,4]. A few studies have compared the early oncological results between RS‐RARP and standard RARP and no significant difference was found [2,3,4,5]. Recently, our group reported the mid‐term oncological outcomes of patients with high‐risk PCa treated with RS‐RARP and these were similar to those of large studies of conventional RARP. This confirms effective and safe mid‐term BCR control after RS‐RARP, while the long‐term oncological results are awaited [7]. Currently, >4 000 cases of RS‐RARP are performed worldwide and more centres are beginning to use and converting to Retzius‐sparing surgery. All centres are experiencing faster recovery of continence. Thanks are due to Drs Galfano and Bocciardi for exploring and sharing this surgical frontier.