To investigate whether the timing of an immediate instillation of mitomycin C (on the day of transurethral resection of bladder tumour [TURBT] or 1 day later) has an impact on time to recurrence of non‐muscle‐invasive bladder cancer (NMIBC).

All patients with NMIBC who were enrolled in a prospective trial between 1998 and 2003, and treated with an early mitomycin C instillation (on the day of TURBT or 1 day later), were selected. Statistical analysis was performed with Kaplan–Meier curves and multivariable Cox regression.

Fig. 1 Kaplan–Meier analysis showing time to recurrence for patients treated with an immediate instillation of MMC on the day of TURBT (Day‐0 group) or 1 day after (Day‐1 group). 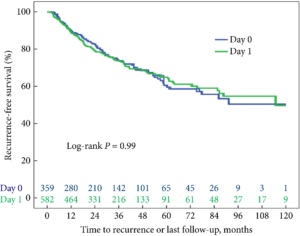 Administering an instillation of mitomycin C on the day of TURBT or 1 day later did not show a statistically significant difference in time to recurrence in a univariable model (log‐rank P = 0.99). After correcting for the number of scheduled adjuvant instillations, no statistically significant difference could be detected either: hazard ratio 1.05 (95% confidence interval 0.81–1.35, P = 0.74).

Read more articles of the week
Editorial: Postoperative intravesical chemotherapy has an important role in...