Article of the week: Ultrasound characteristics of regions identified as suspicious by MRI predict the likelihood of clinically significant cancer on MRI–ultrasound fusion‐targeted biopsy

Article of the week: Ultrasound characteristics of regions identified as suspicious by MRI predict the likelihood of clinically significant cancer on MRI–ultrasound fusion‐targeted biopsy
1,485 views

In addition to the article itself, there is an editorial written by a prominent member of the urological community, and a video made by the authors. These are intended to provoke comment and discussion and we invite you to use the comment tools at the bottom of each post to join the conversation.

To determine whether the presence of an ultrasound hypoechoic region at the site of a region of interest (ROI) on magnetic resonance imaging (MRI) results in improved prostate cancer (PCa) detection and predicts clinically significant PCa on MRI–ultrasonography fusion‐targeted prostate biopsy (MRF‐TB).

Between July 2011 and June 2017, 1058 men who underwent MRF‐TB, with or without systematic biopsy, by a single surgeon were prospectively entered into an institutional review board‐approved database. Each MRI ROI was identified and scored for suspicion by a single radiologist, and was prospectively evaluated for presence of a hypoechoic region at the site by the surgeon and graded as 0, 1 or 2, representing none, a poorly demarcated ROI‐HyR, or a well demarcated ROI‐HyR, respectively. The interaction of MRI suspicion score (mSS) and ultrasonography grade (USG), and the prediction of cancer detection rate by USG, were evaluated through univariate and multivariate analysis. 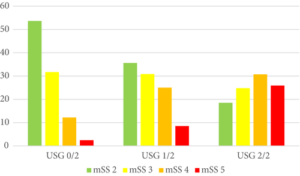 Ultrasonography findings at the site of an MRI ROI independently predict the likelihood of GS ≥7 PCa, as men with a well‐demarcated ROI‐HyR at the time of MRF‐TB have a higher risk than men without.