Article of the week: Testicular asymmetry in healthy adolescent boys

In addition to the article itself, there is an accompanying editorial written by a prominent member of the urological community. This blog is intended to provoke comment and discussion and we invite you to use the comment tools at the bottom of each post to join the conversation. The authors have also supplied a video to accompany the article.

To assess the presence of testicular asymmetry and the currently used threshold values in varicocoele management in a healthy adolescent population.

We conducted an observational cross‐sectional study from April 2015 until December 2016 in which we recruited 539 adolescent boys aged 11–16 years. A clinical examination including testicular size measurement by ultrasonography was performed. Testicular volume (TV) was calculated using the Lambert formula (length × width × height × 0.71). The Testicular Atrophy Index (TAI) was calculated using the formula [(TV right – TV left)/largest TV] × 100. The data for all statistical analyses were stratified for Tanner stage for genital development (TSG) and pubic hair (TSP). Non‐parametric tests were used to assess the difference between right and left TV, and the prevalence of a smaller left testis for the entire population, and between each TSG and TSP. Parametric tests were used to determine the difference in mean TAI between each TSG and TSP, and to compare the mean TAI to a test value of 0. 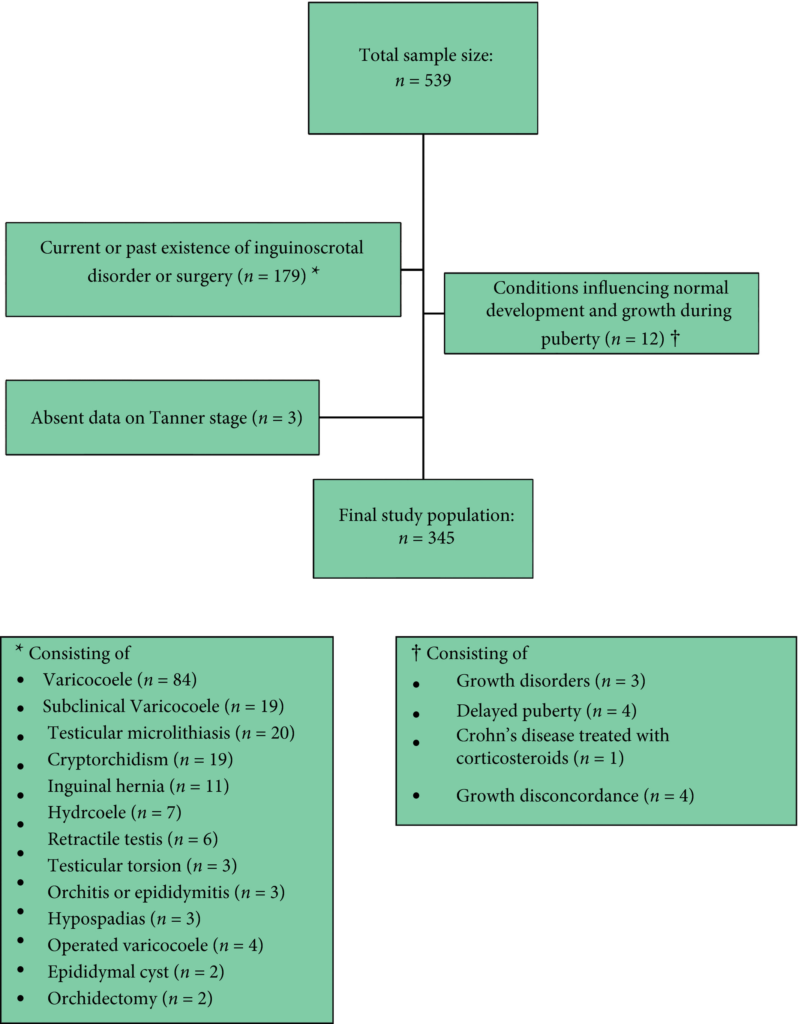 Testicular asymmetry, with a smaller left testis, was seen in a considerable number of healthy adolescents. One out of five adolescents had a smaller left testis and met one of the threshold values currently used in varicocoele management. Therefore, in left‐sided unilateral inguinoscrotal pathology, a smaller ipsilateral testis in combination with a TAI of >20% and/or TVD of >2 mL requires careful interpretation and serial measurements of TV should always be performed. Furthermore, this study provides reference values for TV, TVD and TAI according to TSG and TSP for a healthy adolescent population.