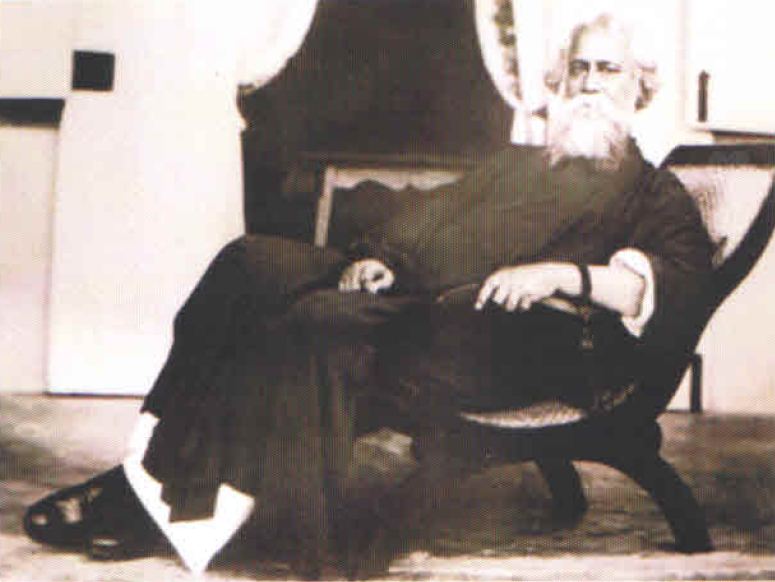 Kabiguru Rabindranath Tagore is perpetually present in the Bengali memory and is a part and parcel of the Indian cultural fabric even after 75 years of his demise. The Bard of Bengal has retained his greatness through his songs, poetry, stories, progressive world view and love for his country.

The first Nobel Prize winner of Asia (1913), Tagore was knighted in 1915 and had the courage to return it as a mark of protest after the Jalianawala Bagh massacre in 1919. He is compared to the likes of William Shakespeare and Johann Wolfgang Goethe for his extraordinarily rich literature and sensitive understanding of human nature.

Rabindranath has been a hero, an idol and a father figure for the Bengali. That is why when it comes to his death there is a self-imposed oblivion among his followers because there is an aversion to accept that he too was human, he too had suffered in his last days.

The way the city cried and the huge congregation of people that came to pay him their last respects go on to show the place Tagore had in the heart of the Kolkatan. But very few people actually know that Kabiguru Rabindranath Tagore did not allow his deteriorating health to affect his spirit.

Seventy-five years after his death this is the first time Tagore’s illness has been revealed and his last days talked about. At an exhibition organised at Tagore’s home ‘Jorsanko Thakur Bari’ on his death anniversary on August 7, 2016 with the official approval of the Rabindra Bharati University Museum, the verandah of his home came alive with photographs and exposition of his last days when Tagore smiled through extreme pain and was surrounded by family and friends. The exhibition showed that despite his failing health he remained positive and at his creative best, and how doctors did their best to make him feel better. Rabindra Bharati University, that is housed in the premises of Tagore’s home, and Kolkata Prostate Cancer Foundation led by the author of this blog, organized this exhibition. It is evident that Tagore died from the complications of an enlarged prostate gland.

Tagore was a handsome man blessed with a good physique and an impressive personality. For the sake of building his body, he even learnt how to wrestle and lived a disciplined life. He learnt horse riding and had commendable stamina, which enabled him to swim across the Padma River. Despite this his health deteriorated at the age of 76 and unfortunately on 10th September, 1937 he lost consciousness and remained that way for two days. Kidney and prostate problems were diagnosed simultaneously. His health demanded immediate attention, which was duly given to him in Shantiniketan by a team of doctors headed by Dr Nilratan Sarkar from Kolkata.

He was also suffering from ailments like fever, headache, chest pains and a lack of appetite. Tagore strongly believed that his life had a meaning beyond these mortal diseases. That’s why the moment he could sit upright on his bed he took to his ink and paper. His love for nature was not only restricted to the stories he wrote, indeed he profoundly believed that he would feel much better if he spent his time in the lap of nature.  That is why he kept visiting the hills of North-Eastern India.

He also ensured that his creativity did not suffer. Even in such trying times he wrote ‘Sejuti’, ‘Naba Jatak’ and ‘Shyama’. He also composed numerous songs and painted to his heart’s content. Tagore cared deeply for his country and despite his ill health he continued to have political discussions with Jawaharlal Nehru and Subhash Chandra Bose. He played host to Mahatma Gandhi and his wife Kasturba when they visited Shantiniketan. It seemed that his deteriorating health was the least of his worries.

On 15th September, 1940 when Tagore was in Kalimpong, due to a pain in his urinary bladder he lost consciousness again. He was unable to pass urine either. Despite the evident symptoms of uraemia, his grand-daughter, Pratima Debi wasn’t ready to accept that Tagore needed an operation. On 29th September, he was brought back to his Jorasanko House on the advice of Dr Prasanto Chandra Mohalanobis.

With the help of Dr Satyasabha Mitra, Dr Amiya Basu and Dr Mahalanobis he was moved to the marble room on the first floor where he spent most of his time. In the presence of his near and dear ones along with dutiful attendants and under the supervision of Sir Nilratan Sarkar and Dr Bidhan Chandra Roy he seemed to be on the path of recovery.

A considerable amount of attention was given to his diet, medicines and cleanliness in order to ensure complete recovery. The poet continued to have his biochemic medicines, which he felt would also give him relief. Dr Dakhshinaranjan Roy visited him regularly and advised him.

On his return to Shantiniketan it seemed, Tagore had come to terms with his failing health and was determined to win this battle without dampening his spirits. He narrated a sea of stories every now and then and his imagination took on the colour of his palette. What emerged were timeless paintings. Around this time he also welcomed the Chinese missionary Tai-Chi-Tao with open arms.

It was the Poush Utsav in December that year, actually the last one that Tagore witnessed, when it dawned on him that time plays the most crucial role in one’s life. The harder he tried to hold on to time, it slipped away from him. Despite the mental and physical struggle, he managed to stand by his beliefs and played an active part in some major protests demanding independence for India. His works ‘Golpo Solpo’ and ‘Teen Sangee’ reflected these precise thoughts in his last days.

Despite this positivity his illness persisted. Because of the constant persuasion of doctors, both, allopathic and ayurvedic treatments were started in a desperate attempt to revive him. On 16th July, 1941, his doctors advised him to undergo surgery.

The operation was scheduled for 30th July. But he was not informed about it for fear that he would not accept it. On the day of the operation after making all arrangements, Dr Lalit Bandopadhyay finally broke the news to Tagore that he would be operated upon. The poet was shocked and not very happy; however, he was taken to the verandah of his house where a special operation theatre had been created for him. A Suprapubic Cystotomy was performed where the doctors aimed to insert a tube into his bladder to relieve his urinary retention. The operation was done by Dr Lalit Bandopadhyay, assisted by Dr Satysakha Maitra and Dr Amiya Sen.

After the operation, he often complained of a burning sensation but thankfully remained unconscious most of the time. To everyone’s dismay, his condition worsened and his pain was evident even while he was unconscious. On 4th August his kidneys stopped working and uremia had set in. Saline was administered to him and oxygen was kept handy. On the night of 6th August, his condition had hit rock bottom and people started gathering in the premises of Jorasanko.

Slowly oxygen tubes were removed and Tagore’s spirit freed itself from the shackles of a human body, at 12.10 pm. The news spread like wildfire and thousands of people rushed to Jorasanko to pay their last respects. The deafening silence of the crowd was broken by the blowing of conch shells. Flowers carpeted his path to the crematorium on the banks of the Ganges.

The echo of his words from “The Postmaster” keep coming to my mind. He said: “So, the traveller, borne on the breast of the swift-flowing river, consoled himself with philosophical reflections on the numerous meetings and partings going on in the world – on death, the great parting, from which none returns.”

A line from his famous song sums up his last days:

Yet Exists Peace, Yet Exists Happiness, Yet The Infinite Stirs.

“Finally, when his condition worsened and he had almost stopped passing urine, doctors diagnosed him with severe uremia and other complications. It was then decided that surgery could not be postponed any further and the poet was brought back to Jorasanko. It was here that a sterilized OT was created for the surgery conducted by Lalit Bandyopadhyay and overseen by BC Roy and Nil Ratan Sircar. They did not operate on the enlarged prostrate, but did a bypass surgery to take out accumulated urine. The prostate had to be left untouched,” said urologist Amit Ghose, who has been supervising the installation of the exhibition – Published in the Times Of India, August 7, 2016

“Not many people know that Kabiguru Rabindranath Tagore suffered from a disease of the Prostate Gland (not cancer). At that time he was given the best medical treatment possible. With the advancement of technology in India we are well-equipped to detect and handle diseases related to the prostate. Also, we wanted to create an awareness through this initiative that with regular check-ups it is possible to have an early detection of prostate-related issues and prostate cancer as well,” said the person behind this initiative, Dr. Amit Ghose, Director, Prostrate Cancer Foundation. – Published in BusinessWire India, August 9, 2016

The kind of love and care Rabindranath Tagore had got from everyone around him also is something to talk about. The doctors treating him tried their level best and they often sat by his bedside holding his hand hoping the pain and the discomfort would subside,” said Dr Ghose. – Published in Asia Times, August 21, 2016