We conducted a subgroup analysis of 61 men with prostate cancer (PCa) detected by 10-core RB but with a negative TB, from a cohort of 408 men with suspicious multiparametric magnetic resonance imaging (mpMRI) between January 2012 and January 2015. A consensus re-reading of mpMRI results (using Prostate Imaging Reporting and Data System [PI-RADS] versions 1 and 2) for each suspicious lesion was performed, with the image reader blinded to the biopsy results, followed by an unblinded anatomical correlation of the lesion on mpMRI to the biopsy result. The potential reasons for TB failure were estimated for each lesion. We defined clinically significant PCa according to the Epstein criteria and stratified patients into risk groups according to the European Association of Urology guidelines. 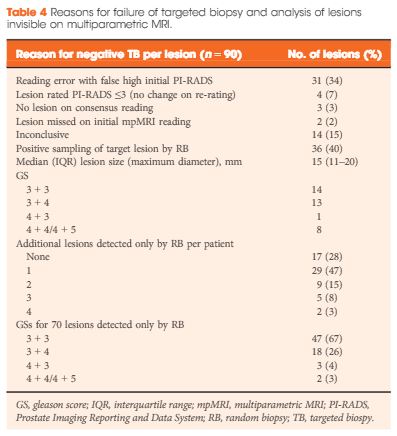 Our analysis showed that RB detected significant PCa in 64% of patients (39/61) and intermediate-/high-risk PCa in 57% of patients (35/61). The initial mpMRI reading identified 90 suspicious lesions in the cohort. Blinded consensus re-reading of the mpMRI led to PI-RADS score downgrading of 45 lesions (50%) and upgrading of 13 lesions (14%); thus, negative TB could be explained by falsely high initial PI-RADS scores for 32 lesions (34%) and sampling of the target lesion by RB in the corresponding anatomical site for 36 out of 90 lesions (40%) in 35 of 61 patients (57%). Sampling of the target lesion by RB was most likely for lesions with PI-RADS scores of 4/5 and Gleason scores (GS) of ≥7. A total of 70 PCa lesions (67% with GS 6) in 44 patients (72%) were sampled from prostatic sites with no abnormalities on mpMRI.

In cases of TB failure, RB still detected a high rate of significant PCa. The main reason for a negative TB was a TB error, compensated for by positive sampling of the target lesion by the additional RB, and the second reason for TB failure was a falsely high initial PI-RADS score. The challenges that arise for both MRI diagnostics and prostate lesion sampling are evident in our data and support the integration of RB into the TB workflow.