Finally, the third post under the Article of the Week heading on the homepage will consist of additional material or media. This week we feature both a video and a podcast discussing the paper.

Fig. 1 Intraoperative view of the apex of the prostate transection line between the urethra and prostate at (A) the normal and (B) long urethral stump positions. 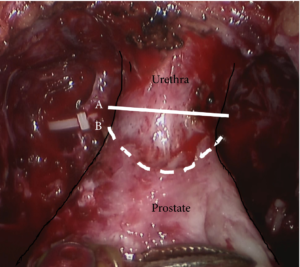