As you may know, we alternate the occasion of the BJUI Social Media Awards between the annual congresses of the American Urological Association (AUA) and of the European Association of Urology (EAU). Our first awards ceremony took place at the AUA in San Diego in 2013, followed by the EAU in Stockholm, and a really fun evening at AUA in New Orleans last year. This year, we descended on Munich, Germany to join the 13,000 or so other delegates attending the EAU Annual Meeting and to enjoy all the wonderful Bavarian hospitality on offer. More about that in our blog posts from #eau16.

On therefore to the Awards. These took place on Sunday 13th March 2016 in the roof garden bar of the beautiful Bayerischer Hof hotel. Over 70 of the most prominent uro-twitterati from all over the world turned up to enjoy the hospitality of the BJUI and to hear who would be recognised in the 2016 BJUI Social Media Awards. Individuals and organisations were recognised across 46 categories including the top gong, The BJUI Social Media Award 2016; awarded to an individual, organization, innovation or initiative that has made an outstanding contribution to social media in urology in the preceding year. The 2013 Award was won by the outstanding Urology Match portal, followed in 2014 by Dr Stacy Loeb for her exceptional individual contributions, and in 2015 by the #UroJC twitter-based journal club. This year our Awards Committee consisted of members of the BJUI Editorial Board – Declan Murphy, Prokar Dasgupta, Matt Bultitude, Stacy Loeb, Mike Leveridge, and Henry Woo, as well as BJUI Managing Editor Scott Millar whose team in London drive the content across our social platforms. The Committee reviewed a huge range of materials and activity before reaching their final conclusions. As befits the fast-moving nature of social media, we decided to omit a couple of previous categories and add two new ones.

One of these was the “Best #EAU16 Selfie” competition which we launched on the eve of this year’s EAU Annual Meeting to encourage some fun among congress attendees. 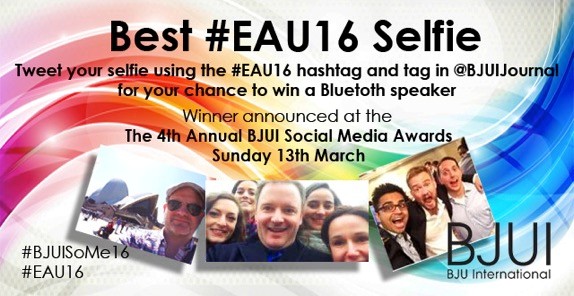 We had dozens of enthusiastic entries which betrayed the social side of urology conferences today – see examples on our Awards Prezi.

The full list of awardees, along with some examples of “best practice” in the urology social media sphere can be found in the Prezi. The winners are also listed here:

Most of the Award winners were present to collect their awards themselves, including Dr Stacy Loeb who received our top gong for her work in driving the #ilooklikeaurologist campaign. The Awards Committee had identified this wonderful social media campaign from early on as a stand-out example of how social media (Twitter in particular), can be deployed to drive a really important social message. The #ilooklikeasurgeon campaign had already caught the imagination of all of us who identified with the message that female surgeons were undervalued in our specialty, and the #ilooklikeaurologist campaign really brought a welcome focus on our female urology specialists and trainees. The tweet that first used the hashtag was sent by Stacy in August 2015 in reply to a tweet from Rustom Manecksha: 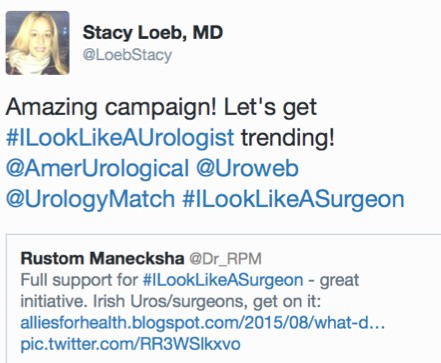 Since that time, over 1000 tweets have been sent using this hashtag, most featuring great pictures of our female urologists at work or at play. See plenty of examples on our Prezi or just search the hashtag #ilooklikeaurologist.

A special thanks to our outstanding BJUI team at the Editorial Office in London, Scott Millar and Max Cobb, who manage our social media and website activity as well as the day-to-day running of our busy journal.

See you all in Boston for #AUA17 where we will present the 5th BJUI Social Media Awards ceremony!

Article of the Week: Immunocytochemical expression of ERG in urine identifies...